Is anyone planning on making or altering any gear this winter?

While I know some in the TS community prefer being out on the trail in the winter, I for one use the long, cold nights to plan trips for next year, inventory and really clean my gear, as well as tackle some DIY gear projects.

This winter the first two DIY gear projects I have in mind are:

1) A cold-weather neck gaiter. My polyester Buff just isn't cutting it in the coldest of winter conditions.

2) A carrying case/handle of some sort for my recently reviewed Hydro Flask growler.

Anyone else have plans to make or alter gear this winter?

I've been toying with the idea of putting together a light, synthetic over quilt to take my winter set up to lower temps and move the dew point away from my down, but not having used a sewing machine for a few decades I haven't worked up the nerve yet.

Definitely have started to think about next year's trips though :)

Kiwi, sorry I am late to the party.

I also love to tinker, I mean be a DIYer.

2. Cleaning and seam sealing an EMS Thunder Lodge Tent I found in a dumpster - mid 80's. This will be a loaner.

3. Building my own candle lantern - the prototype works okay but I can do better.

4. Sewing a top quilt, either Primaloft Gold or Climasheild Apex with 1.1 oz. nylon taffeta. I have someone who is going to help me with this one.

5. Attach a laser pointer to my compass in a way that provides for a quick, easy separation of the two (quick release).

6. Add a LED light to my bamboo hiking stick. Just because.

Well on the 25th I'll be breaking out the sewing machine. I'll be making a karo-step top quilt for ground use. Going for about a 15-20 degree bag based on my calculations.

I'm the same way as you, Kiwi, in that I do more projects and gear organization during the winter. When tax season comes around, I really only have day hikes that I can do and DIY projects here and there.

I am planning to break out the Aire Jaguarundi 16 foot cataraft and get it rigged for a trip down the Grande Ronde River in June for my 65th birthday.

@ppine, you definitely have to post a trip report after that! Sounds fun!

@ppine, you definitely have to post a trip report after that! Sounds fun!

Absolutely, I would love to see some photos.  I hope it is a great trip!

I bought a used sewing machine 2 years ago, but I've yet to find someone to teach me how to use it.

I'd like to take my 15F sleeping bag and convert it to a Quilt by removing the zipper and hood. I had someone do this with a cheap 30 bag, but I need something for colder weather.

Oh, and I'm hoping to get out on a few overnight trips this winter. I haven't camped since September. Ugh!

I been out on two trips so far and taking this holiday I have 3 days,..No snow just about 20 at night to get out...So no Iam trying to extend my seasons slowly..

Normally I would not stop for winter but I'm out of action for the next six weeks due to a inguinal hernia surgery that I had been putting off for several months. Surgery went as well as such a thing scan go I guess (last Wednesday). But it's going to be brutally hard to take it easy once I start feeling better.

The project I'm considering is also sewing related: I want to make a light weight guitar case/cover for my travel guitar (Baby Taylor) out of an old TNF tent. The case that comes with the guitar is a heavy padded bag that actually weighs more than the guitar! I've been wrapping it in a garbage back but it's a hassle to tie it on like that. Cool project, Patman. Baby Taylor? Yeah, I'm jealous. I had that same kind of though before and to snag a Baby Taylor or Little Martin. Best of luck with your recovery!

@Patman, I'd love to see the custom guitar case once it's finished. Please post a photo. Best wishes with the recovery!

I've been toying with the idea of putting together a light, synthetic over quilt to take my winter set up to lower temps and move the dew point away from my down, but not having used a sewing machine for a few decades I haven't worked up the nerve yet.

Definitely have started to think about next year's trips though :)

This is one task I can scratch off my to do list. Ordered a 20°f Prodigy from EE that I can use as a winter over quilt and Mrs S can use the other three seasons.

Now I'm having the same costing debate about putting together a pulk. I think cheap is going to win over quality on this one :)

Girlfriend's sewing machine broke the top gear and as soon as I can get the replacement part I'm going to get the machine fixed and timed so we can use it again.

Now I'm having the same costing debate about putting together a pulk. I think cheap is going to win over quality on this one :)

Here's an old blog post I wrote about the pulk I built for a ski patrol class.  It's based on Ed Bouffard's downloadable book for do-it-yerselfers at SkiPulk.com. 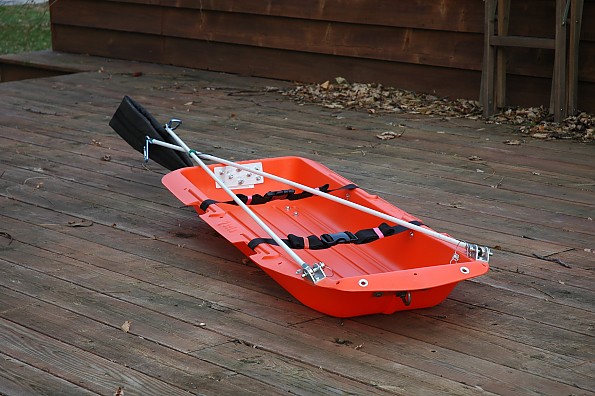 It starts with an inexpensive sled, modified to be pulled by fiberglass tracers. The tracers are connected to the sled with ball joint rod-ends pinned into aluminum channel that's bolted to the front corners. Eye bolts on the other end of the poles are clipped to a padded waist belt. Stabilizer fins help prevent side slipping whilst traversing a hill. I added U-bolts to the front and back to allow it to be belayed.  All the parts are listed by part number from McMaster-Carr. See the comments section for updates on availability of the sled.

Nice sled, Bill. I made one a few years ago, but the sled had a rounded bottom and was too tippy. Next time, I'll look for one like yours. I used pvc pipe and some basic fittings. I clipped it onto my pack belt with biners and that worked pretty well. I've seen Ed's site, he has some nice hardware.

Thanks for linking to your site there Bill. I have seen very similar designs in my research and had to double check to make sure I hadn't already looked at yours heh. That Paris sled seems to be everyone's favorite to use. I'm just trying to decide how fancy to make the traces right now.

Do your poles run straight from the sled to your belt or do you cross them? I've seen folks adamantly swearing to only do it their way but they aren't all in agreement about which way heh.

I cross mine.  I found if they were straight, and I went around a tree, the sled would hit the tree.  With the tracers crossed, the sled pretty much follows my tracks.

I was surprised that I could buy just two of those 6' x 1/2" fiberglass poles from Kencove Farm Fence's web site. I still get the occasional catalog from them ...

McMaster-Carr's web site is a thing of beauty in that you can start with a your generic hardware need, like ball joint rod ends, then choose between male and female, material, rating, thread size, and the choices keep narrowing right down to the one you need.  Like having that grey-haired salesman at the old hardware store downtown.

And the Metals Depot web site had good prices and reasonably small minimum orders. I was able to order two foot lengths of the stock I needed for backing plates, skegs and to clip the tracers on.

I have made similar sleds for winter trips. I used PVC pipe for the crossed poles. Sometimes I pulled them on xc skis and sometimes I used a dog with a harness to pull them.

Finished my Karo-Step Top Quilt. Been doing a little bit every night after my wife and, more importantly, dogs went to bed. My dimensions and details are here on a Google Doc.

It is made with Argon 90 (outer, black) and Argon 67 fabric (inner, brown) from Dutchware, equivalent to 15 denier and 10 denier fabric, respectively; baffles are nose um mesh also from Dutch. The quilt is filled with 850 fill power white goose down from Wildernesslogics (last year had free shipping...this year it looks like flat $5.95 shipping). The thread is 100% polyester.

Everything used except for the down. 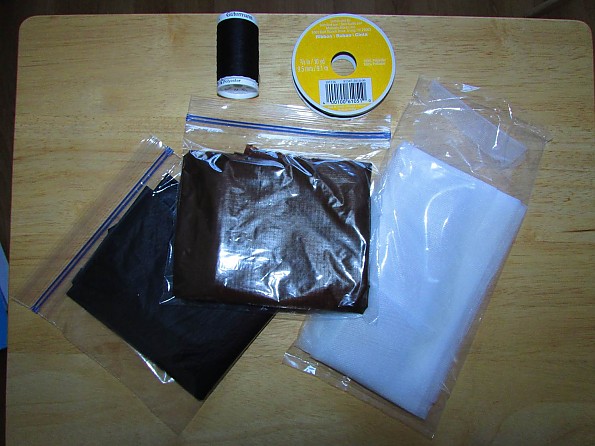 I put three tie out points of 100% polyester ribbon (like Grosgrain) on each side of the open area if I wanted to use shockcord to have it tightened underneath my pad. I also put a sewn in channel at the top if I wanted to have a shockcord at the very top. 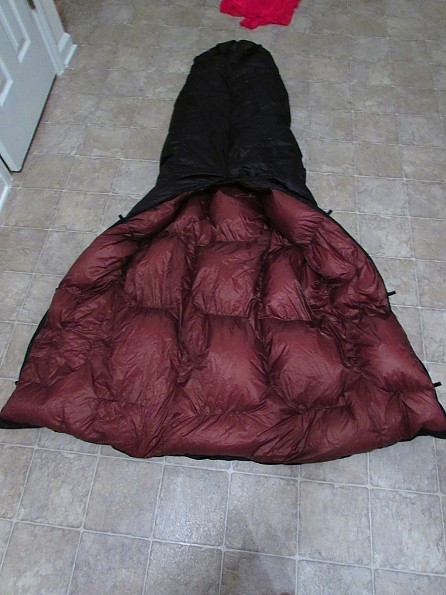 The design is a 12" square with each side being: 3" open, 6" baffle, 3" open and so far all around. With these open areas, down can be maneuvered around. If my legs are colder, I can move down from my middle down to my legs. It doesn't freely flow, but if I massage it around, it goes easily. I based my design on those I saw on Youtube. 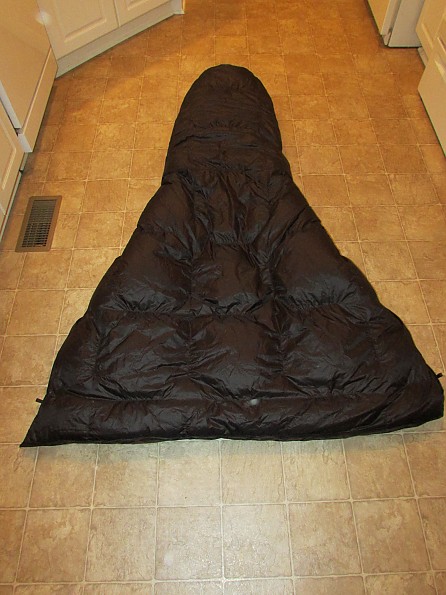 You can see the tie outs easier here. 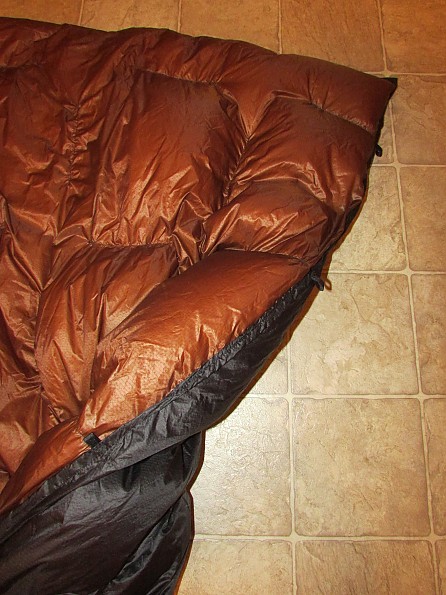 Close up of tie out 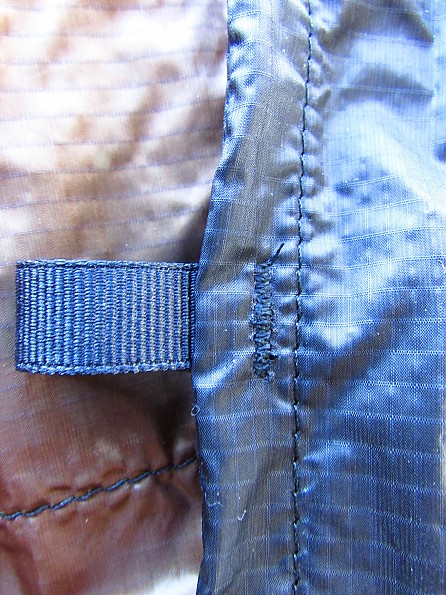 Inside pic of the reinforcement I added to the section where both side are sewn together. 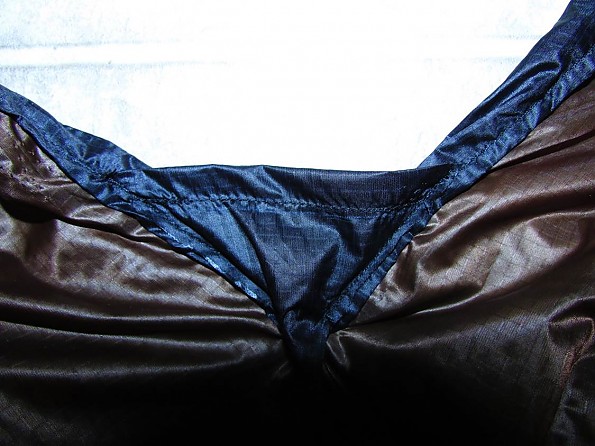 About 3" loft, hoping to get between 15-20 degree rating based on my calculations. Total weight is about 1lb 6oz with a whole pound being down. 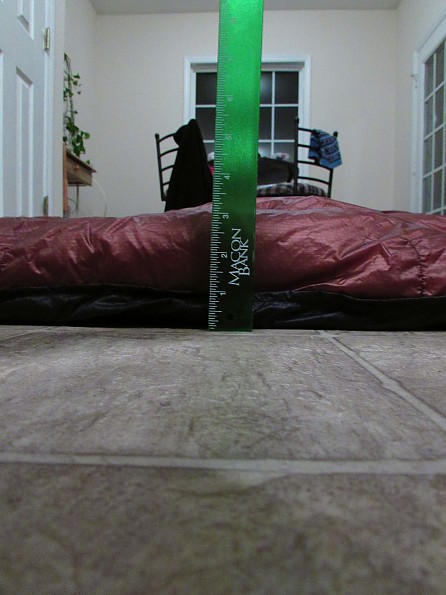 Just stuffed away in a dollar store mesh bag. Oh the possibilities! 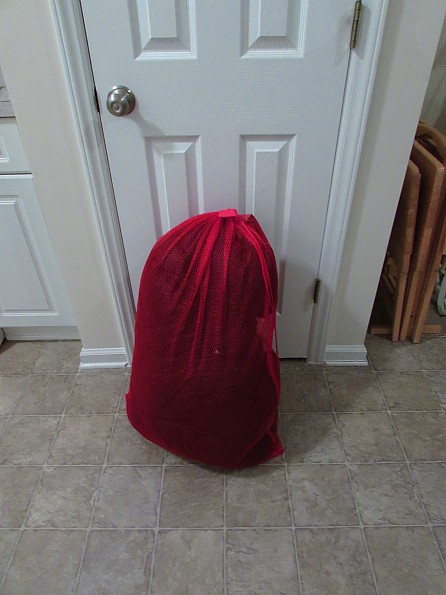 I also have a spreadsheet I made which calculates the amount of down required based on volume of the quilt and what type of fill power down you have and the amount of overfill which is desired. That couldn't be imported into a Google spreadsheet since it had nested IF functions in the spreadsheet. If anyone's interested in it, feel free to PM me and I'll email it.

The true test will be out in the field, unfortunately I just got done with two 3 day/2 night trips at Linville Gorge inDec and over New Year's and all I have left are weekend day trips planned before tax season revs up :(

Do it! Use Climashield insulation B/C it has the best loft retention of any synthetic fill. (I'd stay away from PrimaLoft for loft retention.)

Put a long zipper on the bottom so you can open it up & see the insulation. Then you can beat the topper, unzip and shake out the frost. 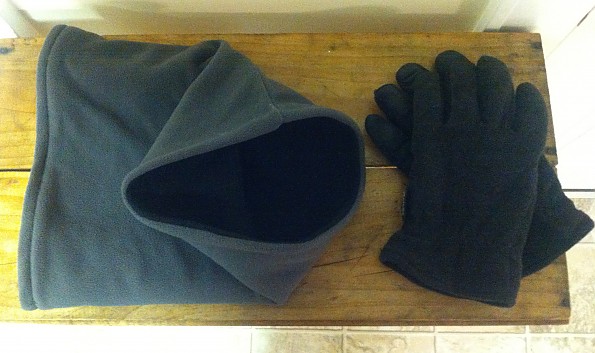 Cold weather neck gaiter that I referenced in the original post.

Used two types of fleece, a softer Blizzard fleece of the inside (black) and a tighter anti-pill fleece on the outside (gray). The gloves are merely in the photo for reference, I didn't make those.

yeah I ain't gonna post any pics of my stuff after seeing those two.

I can barely sew buttons on a shirt, so I am positive that I would be super impressed with your guitar case project! I'd love to see it!

As someone who also plays the "gitfiddle" too Patrick, I'm also interested in that case, especially since you first mentioned it. 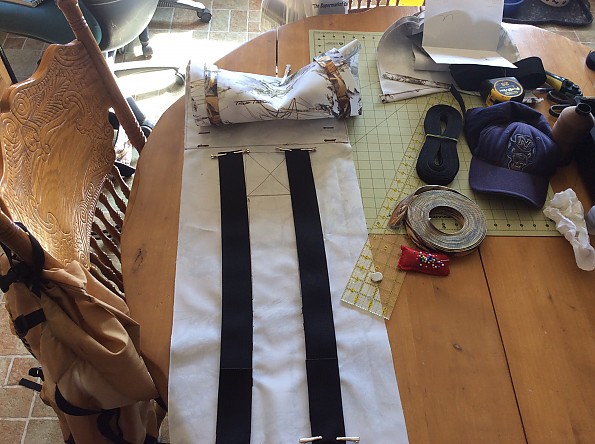 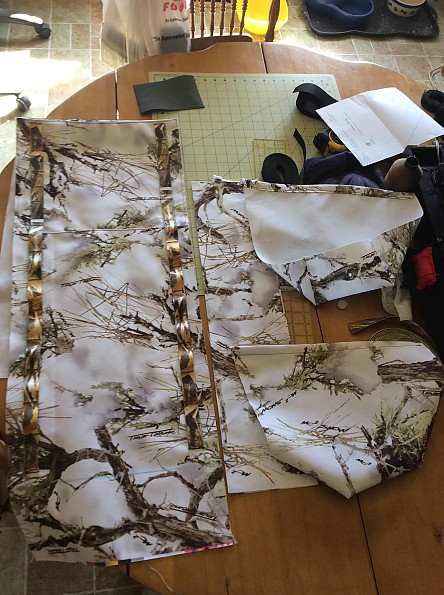 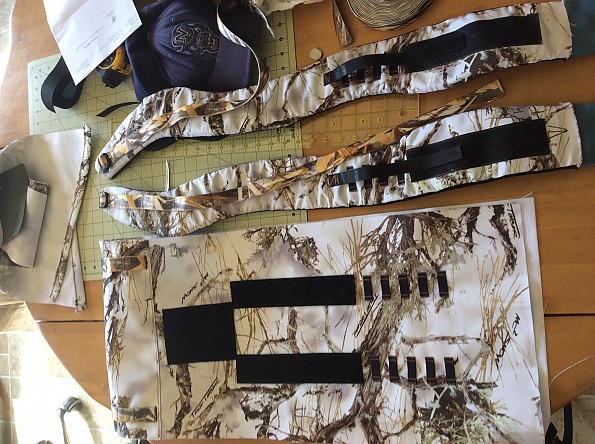 I'm in the middle of making another pack for a friend. Here's what I've got so far.