I have 2 old (90s vintage) Moss tents. I recently pulled them out of storage to set up, clean and inspect. (And despite being in drought stricken Southern California, this process apparently brought monsoon rains this morning...) 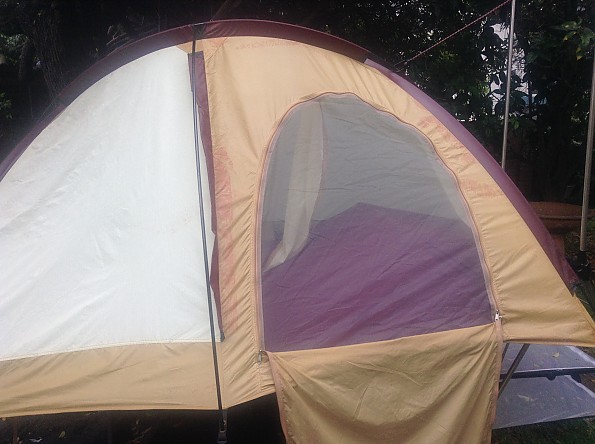 For the first time, I'm having a problem with the burgundy fabric, shown on this tent. The pole sleeves have become tacky, making it difficult to slide the shock-corded aluminum poles during setup.

When I unpacked the tents I noticed the material sticks to itself, and also to the rip-stop material. The darker color has transferred to the beige tent walls during storage. The walls are different, lighter weight rip-stop material, not coated as the burgundy fabric appears to be.

I've tried cleaning these pole sleeves with a small amount of non-detergent soap. It has helped in some areas, not in others. The stains do not come off during cleaning, even with soapy water and gentle scrubbing. 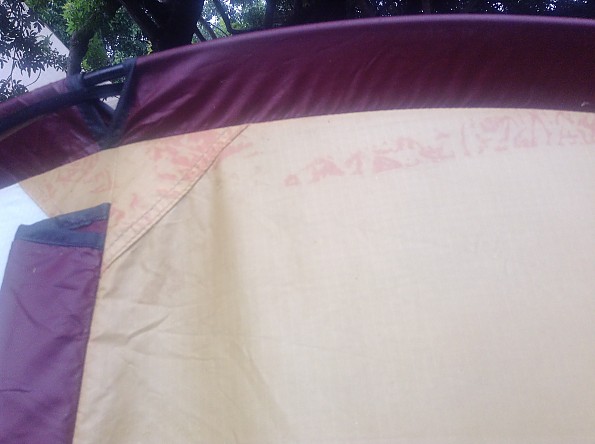 Has anyone else experienced this staining/sticking problem, and/or can recommend a solution? I'm not sure if this is due to age, and/or something degrading in the fabric, or perhaps the tents were slightly damp when last put into storage which contributed to this problems.

It is happening in both tents, but is more pronounced in the Hobitat-2.

Thanks for any suggestions on managing/preventing this from getting worse.

I'm not sure that "scrubbing" however "gentle" is a good idea (live with the stain?)

Neither stated problems (not an "issue"!) observed/experienced on 30+ year old Solus II (yet!)

Might try waxing the poles.  May not be much you can do about the nylon.

I have an old Moss tarp. It has also become kind of tacky. It might help to air out the tent for a couple of weeks, leaving it set up. I would not worry at all about the staining. It is badge of honor for keeping equipment in service instead of in the landfill.

You might try rubbing the sticky parts with some dry sand or pouring it down the sleeves, then rinse after awhile with a hose.

thank you all for the thoughtful remarks and suggestions. the tents were stored in an outdoor shed that developed leaks, and likely this contributed to moisture issues. Very grateful the mice that entered ignored the nylon after shredding other materials in storage!

Chuck & ppine- I agree that living w/stained but still functional tents is not the end of the world. And as ppine suggested, I've left both tents set up for past two weeks (in shaded areas) to see if a thorough airing helps. the stickiness seems to be diminishing.

Alan-  hadn't considered that option. is there a specific wax for tent poles?

Hi Lori! Look for a product called Mirazyme. It will prevent further degradation of the fabric coatings, by killing the mildew that has set into those pole sleeves.

The tackiness is the coating coming off. That's damage done, but as ppine notes, your Moss tents just have a bit more character now.

Mirazyme, a good airing, and a talc powder dusting is about the best you can do.

thanks pillowthread. I live near an REI, and they carry it.  I will try it.

No specific wax, might use car wax.  Just a thought.

Much has been written under Gear Repair addressing this very common problem of Urethane coatings becoming sticky over time. Moisture and restricted outgassing resulting from coated fabrics being stored in stuff sacks or sealed storage containers seem to be the best explanations set forth. Gary suggested soaking in vinegar and water solution, rinsing and air drying. This didn't work for me as a remedy on a tent fly. However, a long period of airing out worked wonders. I might also suggest you spray pure silicone into the pole sleeves and onto the poles. Good luck!