I have a pair of Asolo leather boots that have seen some heavy use over the last ten years. I don't use them much for backpacking Any more except really wet and cold trips, but regularly wear them for work several days a week. After two sole replacements and many leather treatments, I am trying to make them last another year or two. Any thoughts on repair of the inner lining that is starting to wear out would be much appreciated. 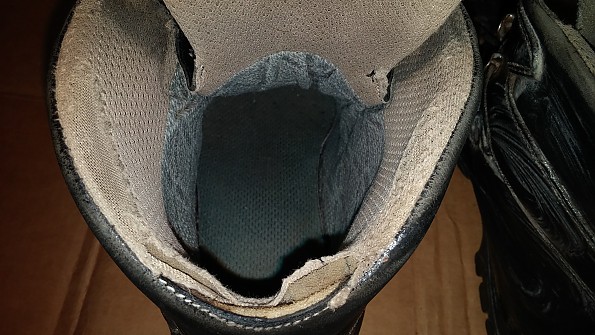 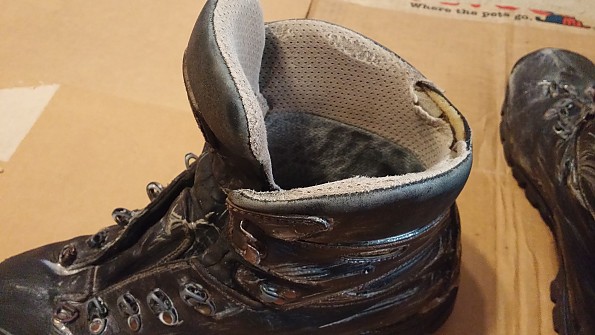 Maybe you can cut out the rough spots and use contact cement to glue in some thin sheets of foam.

I had a pair of Vasque Sundowners that developed the same problem.  I found that the defect didn't affect the function of the boots in the least.  Perhaps a bit if Shoe-Goo or similar plastic product might close the gap (along with ppine's sheets of foam) if you are really concerned.

The best way would be to cover the liner with a soft glove leather (so comfortable!).

However, the easiest fix would be  to buy some high-quality sock liners in a size greater than you wear. Cut a dart where the center of the tongue would be, down a few inches to allow easy entry for the foot and to permit the sock liner to fit against the high boot sides. Soak the sock liner in a good fabric adhesive and then, wearing latex gloves, put your hand in the sock liner and slide it into the boot, pressing against all surfaces, thus bonding it to all the existing lining. Fold the excess sock liner over the top of the boot, to cover the foam that is showing.

The 520 is a good boot. I've had two pairs. The liner doesn't look damaged in a way that would cause blisters so probably no need to do anything. My two cents though would be ditch the 520s for a pair of Scarpa SLs.

I'm doing the same thing with a pair of Scarpa SL ( bought new ones for work ) with the old ones I sealed the heel pocket with gorilla tape. Your body heat seals the tape really well. I use them on medium day trips.

From my perspective the best way is to tailor a cover from a soft leather which should cover the top from both sides.

The Asolo 520 may have been a good boot when they were made 10 years ago but as far as I can tell Asolo quality control has plunged into oblivion.  The 520s were my go-to winter backpacking boot for a year or two before this happened:

This failure actually happened on a backpacking trip.

And my usual non-winter boot is the Asolo Fugitive which I know are expendable but this is ridiculous---A brand new pair of Fugitives three months old and purchased in June 2015 get this blowout on a September trip.  Boggles the mind.

Solution?  Ran screaming from Asolos and got a pair of Zamberlan full leathers---

Thanks for all the great advice folks. I knew you all would give me some options to consider. I'll see what works best. And post some pictures of the fix later.

Tipi...I almost replaced these old ones with a new pair of 520s a couple of years ago but heard similar complaints about the quality. I'll keep these around for work, but those Zamberlins look nice for winter trips. I tried them a couple of years ago but couldn't get the fit right. Too thin for my feet and no wide available. I'll have to try again if there is a wide size. Yours have goretex lining? I generally prefer no goretex if possible but that narrows down the choice.

My Zams are the Viox Plus GTX RR which is another way of saying goretex lined in the Wide (RR) size, perfect for my needs.  I just kept my time-tested Asolo fit (10 Wide) and used the same for my Zamberlan order and they fit very well and perhaps just a hair larger than the same size in Asolo.

I found Asolo's quality went downhill after having my second and third pair of boots (5-10 years ago)... Not sure what happened there, but I changed over to Lowa. Rands peeled, soles separated much (much) too soon! My last pair also had one of the nylon shanks warp, which prevented both the forefoot & heel of the boot from sitting in a copacetic manner... Maddening when you paid $250+

A boot repairman like Steve Komito in Estes Park, CO does all kinds of repairs.