Hello guys, I hope this hasn't been asked before; I couldn't find a relevant topic.

Does anyone know what this kind of buckle is called? Not knowing the specific name is making it difficult to source. 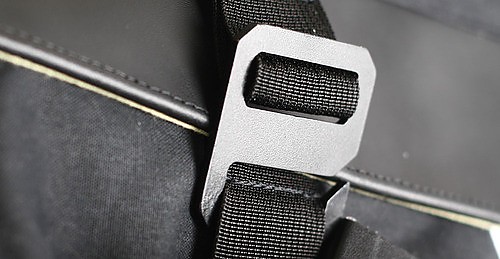 Backstory: The old plastic buckles on my Dakine Sequence's compression straps have been melted off by a radiator, and one of the buckles are sewn to the back through a loop.

I have found classic buckles with removable pins, but the removable pin is only on one side of the buckle; this will not work, as the buckle must be reversed on the other side of the bag so that the two straps may clip together, creating a vertical snowboard carry.

I've decided on these metal buckles, since they only need to be threaded on one side, and I should be able to make a small loop of nylon webbing for the buckles to hook onto as a snowboard carry.

Alternatively, if anyone can point me towards a buckle that allows both slider pins to be removed, that would also be swell.

I have replaced various buckles and tack on my packs over the decades.  Often I could not find exact replacements, and frequently not even their functional equivalents were available, requiring me to redesign the system.  There are lots of alternative tack out there suitable for your application: for example, consider replacing the existing strap with a system that uses a side release buckle.

I avail to my local shoe/luggage repair shop to effect such repairs for a very reasonable cost.  Often these shops have such items on site, so you don't even need to spend time searching them out.  And they will be happy to perform the work with materials you provide.  This site has a good selection of buckles.

Problem solved. Actually found exactly what I needed in the Sea to Summit 2-pin side release buckle; both sides of the buckle have a removable pin, so no sewing needed. I'm on a mobile, so I'm too lazy to link, but anyone interested who Google's it will find it. There is also a one-pin version that costs a dollar less, and several other replacement pieces with removable pins.

I've looked for that buckle in the past.  For those that are looking for something similar, I had previously found: