Recently on an mid-September deer hunting backpack in eastern Nevada's Mt. Moriah area I was camped at 8,125' for two nights in my Tarptent Moment DW solo tent.

The second day there it rained for a full 7 hours of steady downpour. With rain that heavy I stayed in my little solo tent for, you guessed it, 7 hours! The rain stopped only to change to snow!

When I got home I rinsed my tent in the bathtub as i always do after a trip. But this time I next soaked it in Granger's wash-in DWR solution. Then I hung it out to dry in the backyard. Since I live in the Las Vegas valley it dried quickly enough that by 3 PM I could spray it with REVIVEX DWR spray as a backup to the Grangers DWR.

Interesting experiment, I'd love to hear your thoughts once youve had a chance to test it out. My concern would be over the treating of the inner affecting the breathability. Is the moisture from your breath still going to able to pass through the inner fabric fast enough to not accumulate on the inner. Keep us up do date!

These are DWR treatments that can actually increase breathability in wet situations. They do not form a membrane on the breathable fabric but make the fibers more hydrophobic.

Instead of a fabric "wetting out" and greatly decreasing breathability, with DWR treatment moisture rolls off and does not stay in the weave of the fabric. It's why breathable waterproof garments like GTX and eVent have to have their DWR renewed at least yearly.

I read that the Granger's DWR is heat activated.  Are you planning on tumble drying the fly on the low setting?

FYI; You do know that the North Rim closed to entering vehicles on November 1st? You will have to hike from Jacob Lake to the North Rim in order to do the R2R.

The North Rim closes every first of November or after the first snow fall, as its about 40 miles from Jacob Lake to the rim and the park service doesn't plow the road. You may be able to drive to the rim anyway, but if it snows during your hike across the canyon, you may not be able to retrieve your vehicle till spring next year.

I met a woman once i the canyon who had done just that, drove around the barrier to the rim, then hiked across the canyon and back a R2R2R only to find her rental car buried in snow. She called the park service who told her, the car was stuck there till spring as they would not plow the road just for her to remove the car.

Good luck, November is usually dry in the canyon. I spent 20 years from 1983-2003 backpacking the Grand Canyon from as early as October to as late as April. November,December and January were my favorite months to hike the canyon as snow on the rims,especially the North Rim meant more water in the side canyons below. My longest hike was in January 1999 when I spent 28 days in the canyon hiking 256 miles. I went down the South Bass, went across to the Hermit,Tonto then down to Phantom Ranch, then up to the North Rim, then back down the North Kaibab to the Clear Creek Trail head and over to Clear Creek along the North Tonto Trail and down Clear Creek to the Colorado, then back to the NK and up the South Kaibab to th Tonto again. The east to Tanner Rapids, then up the Beamer Trail to the Little Colorado River, then up it to the Sipapo, then on to Blue Springs and back to Tanner Rapids and out the Tanner Trail to Lipon Point on the South Rim.

Back then permits were very easy to get with no reservations, I always got standby ones. I lived in the canyon 4-6 months a fall, winter and spring and saw much of the canyon most visitors even long distance backpacker never see. I found routes down many of the side canyons.

Good luck on the R2R, I did my first with a friend who in his 86th year, hiked 106 R2R's in one year. We drove a friends car who worked at Phantom Ranch to the NR so she could get it and then did our first R2R, me in 7 hours my friend who was then in his late 70's took 19 hours. After that he started doing at least one R2R a week till his 86th birthday year when he did 2 a week from January to December 24th.

The North Rim is OPEN to vehicles in November, entirely depending on snow conditions,  B/C the roads are not plowed in winter.

We started our trip down the North Kaibab Trail on Nov. 6 and came up to the South Rim on Nov. 9. Four days and 3 camps. Great views and I had a good hiking partner.

That last day coming up from Indian Garden was a bit tough for me at age 74. Every 15 minutes I had to take a two to five minute break. But the views were all worth it.

If I did not have to interrupt my training for a two week southern European cruise I would have been in a little better shape. (Complaining here, not bragging. ;o)

I used to backpack on the West Side of the Cascades and a lot in Colorado and Wyoming.  In really wet weather, the air is saturated and you are adding your own moisture from respiration and perspiration.  It comes with the territory.  I do not believe there is much you can do about it except plan for it. Sometimes you can set your tent under dense trees like spruce or a rock overhang.  You can take the fly off during breaks in the weather and dry out.  It seems counter intuitive, but a fire in wet weather can change everything. I like to have a "dining fly" in addition to a tent to sit under during prolonged wet weather and sit by a fire. Then I can see out and I am not trapped in the little bping tent.

On the occasions that I have condensation on my silnylon tent, I usually take it out and let it dry when we stop for lunch, or if we're stopping midafternoon for the rest of the day, set up the tent and let it dry then. But I don't tend to hike in humid environments. A pack towel to wipe off the interior before packing is enough to take most of the wet (and associated weight) off the tent - the towel will dry while I hike, dangling from the pack.

The one tent I have that's not ever had condensation has been the tyvek version of the Tarptent Sublite - but it's also not rainproof at all. It's breathable, and it's light, and great for sleeping in the sunny afternoon and not dying of heat stroke inside -- but if it really rains you're gonna float in the bathtub.

It would be interesting to know how Todd Tex, the wp/breathable fabric of which Black Diamond four season tents are made, would fare in such condensation prone environments.

Yeah I live in very humid areas and when the conditions are right it doesn't matter what kind of shelter you use. I've had condensation on open tarps before.

Patman is the Voice of the Turtle.

He speaks the truth.

+1 for Ppine's dining fly solution to augment a tent.

One of my favorite nonessential pieces of gear is a 9X11 cuben fiber rainfly.  It weighs just a couple of ounces; the guy lines weigh more than the tarp.  And I am looking into some sort of UL solution to that such as high strength fishing line.  All backpacking tents get claustrophobic if you are cowering from the rain for more than a couple of hours.

For canoe camping we used to carry an extra tarp, maybe 10 x 12' and sometimes in wet weather put it up over tent + fly for an extra layer of protection. It covered an area way bigger than the tent so all the drips were well away from the floor of the tent, and because there was little/no rain on the outside of the tent fly there was much less condensation on the inside of the fly. And it can provide a sheltered cooking space out in front of the tent -- way bigger and higher than most vestibules. It has occurred to me, although I haven't tried it, that for backpack-camping in forests where there's plenty to tie to (and not too much wind), we could leave the tent fly behind and carry a tarp instead, using the tent body for bug protection and maybe a little privacy. Heavier, but potentially much better for sitting out inclement weather. That old tarp is stored away back in Norway, but maybe we'll have to try that sometime...

Susan and I have done that several times on both backpacking and canoe lake trips...it worked pretty well. On one of the lake trips we used two big tarps and overlapped them over a rope ridge line. It was a bunch of rigging and staking to get it right but then we setup the old MSR Hoop tent with no fly. It was quite nice.

I didn't leave the tent fly behind as this was a 1 piece tarp like tent, but I carry a small tarp to augment my shelter on really rainy weekends when weight isn't an issue. Got this one pitched quickly one afternoon when the rain started pouring and didn't stop for 24 hours....enjoyed the evening under the tarp with a little more breeze and was able to leave the tent doors more open for ventilation. Nice to dry out clothes in too so started the next day with damp only and walked in the rain to heat up. 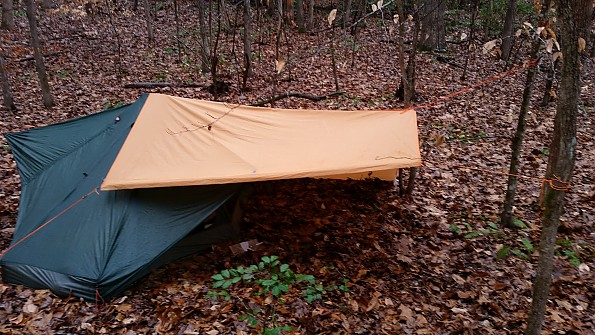 I too used a tarp as a "porch" when I was solo sea kayaking in Georgian Bay, Canada. Glad I had it because all the kayakers on that island were stormed in for a day with lots of rain and high winds.  I could cook and keep the tent entrance area dry.

As with canoeing (I've also done a lot of canoeing in Quebec and Ontario) a sea kayak can carry "necessities" like tarps and beer that would be prohibitively heavy for backpacking. ;o)

Phil I remember that pic from a TR.I think I might start carrying my tarp to extend my awning when we get those endless days of rain.Thanks for the tip