anyone have any comments about Lowa boots? Any good?

They tested three pairs and all failed.

Goe-tex told me to order new boots (any brand or model) and they will test them before sending them on to me.

Thought perhaps the European boots may be better made than the Chinese junk that seems to be flooding the market.

I can't speak on the Zephyr's but I do own a pair of Lowa Argon GTXs. 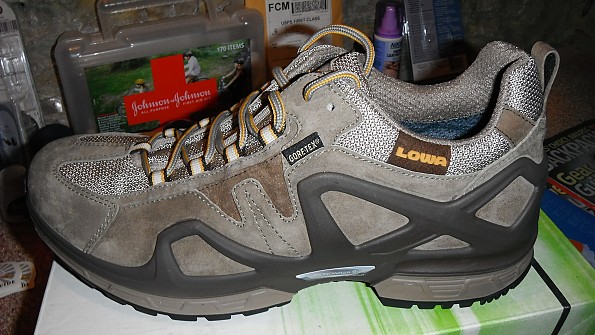 From my experience Lowa makes a quality product.

Well, I'm certainly all about trusting the opinion  a fellow Yinz Dude.

I gotta tell the Gore-tex folks what size to get me.

I have had a pair of LOWA zephyr mids for about a year and a half now. These boots are champions.  They are a light hiker not meant for carrying anything more than about 25pds on them and not used for extended periods of times (ie backpacking). That being said, I did not treat mine that way. I routinely for the past year and a half have taken my zephyrs on multi day backpacks at times carrying loads of 60pds+ depending on location. I have worn them in 3 feet of snow with gaiters and was confident in the Gore-Tex. After thoroughly abusing these boots as my primary hiker, work shoe  and having the toe cap melted off for the past 9 months they still are functional. I am truly impressed with this product even though I have pretty much destroyed my pair. This is one of the lightest Gore-Tex boots that LOWA makes and the Gore-Tex is worth its weight in gold. Its kept my feet nice and dry for a number of stream crossings and has only failed in the heaviest saturation events (melting snow seeping inn and wiping out in the river).

I do feel though I could have got more out of these boots had they possessed a Vibram sole. Which is why im gona buy the renegades next.

oh sorry forgot to mention about sizing I wear a 10.5 running shoe (close fit) but my lowas are 11's they offer enough space for hiking socks and for moister to move around. If you need a large toe box I would suggest looking to Vasque Boots.

appreciate the feedback about the Zephyr

That's what I'm looking for - a lightweight, waterproof, comfortable boot.

My backpacking is done entirely in the Southeast (Florida and Georgia) where the trails are flat and the only obstacle you may run into is a tree root.

My pack weight is typically about 45 lbs.

I have hiked in running shoes with no problem, but the morning wet grass, and the sometimes flooded trails  makes me lean towards GTX boot.

I presently hike in a pair of Vasque Clarion GTX, but they are about 10 years old and just wanted something lighter weight.

I tend not to wear thick hiking socks too often (Thorlo's), I prefer thin running socks (my feet are heavily calloused from running and martial arts).

They seem to run a bit more narrow than my other various shoe/boots but length wise they are pretty comparable to my Scarpas, etc.

You ever hear of a "Pittsburgh style" chicken wing?

I was in the one and only Steelers bar in Cincinatti (Martino's) when Pgh played Kansas City.

On the menu was "Pittsburgh Style Chicken Wings", which was the whole, uncut three segmented chicken wing.

Pretty darn tasty, but I think they made this up.

Hmmmm, I really haven't heard of a "Pittsburgh" style wing... I will say that if and when I order wings around here they are typically 3 section(whole) wings.

I usually just make my own wings. I like super hot(ghost pepper sauce) and I have yet to run into a wing in any of the restaurants/take outs here that are hot enough for my taste.

Lowa, is one of the legendary marques in German mountain boots and were simply fabulous boots for decades. They began to cheapen in quality, as with so many other fine Euro, brands, about a decade ago and are now a shadow of what they were.

Obviously, suburban strolling in densely populated parks along signed trails or in huge cities does not require the same type or quality of footwear that one needs to climb in the Alps, Rockies or other major mountain ranges, but, it is sad to see names like Lowa, even consider making running shoes with GT liners and calling them "boots".

Well, I guess that is where a major segment of the market is now and "business is business" as the Mafia "Dons" in that great movie "The Godfather" often remarked.

"but, it is sad to see names like Lowa, even consider making running shoes with GT liners and calling them "boots"."

Got the Lowa Zephyrs.

Haven't walked in them yet, but I am impressed with them!

For 12 hours now, the boots have been filled with water and not one drop can be seen on the outside of the boot, or on a sheet of paper under the boot.

These Lowa's are made in Slovakia. The craftsmanship between a Euopean made vs a Chinese made boot is blatantly obvious.

Another example of - you DO get what you pay for.

What was the problem with the Goretex linings, in the Addidas shoes, if you don't mind my asking - were they just not waterproof?

These Lowa's are made in Slovakia.

Mine(ones pictured above) are made in Slovakia as well.