Anyone have recommendations for trekking poles that have a camera post built into the top of the handle?

Another requisite is lever/flip locks, as I really do not like the twist lock mechanisms.

I know the are out there, but just thought some people might have some advice on which ones they like.

Consider getting a mini tripod/clamp instead.  The camera head has full tilt and pan capability.  You can attach it to your trekking pole, use it like one of those table top tripods, clamp it to other objects like tree limbs or pack frames.  If you bring along a wood screw you can drive it into a tree trunk or log and clamp onto that.  The device is about the size of your fist, and weighs a couple of ounces.    Very versatile. 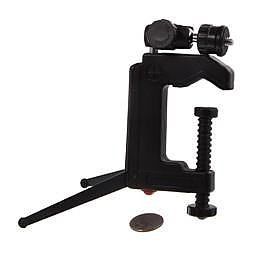 BD Flick-Lock poles get high marks from their users, including skiers, but I don't see one on their site with a camera mount. I have Leki's with the twist lock and they tend to slip. As far as a camera mount, there are a couple of choices-I found this article, with a couple of innovations- 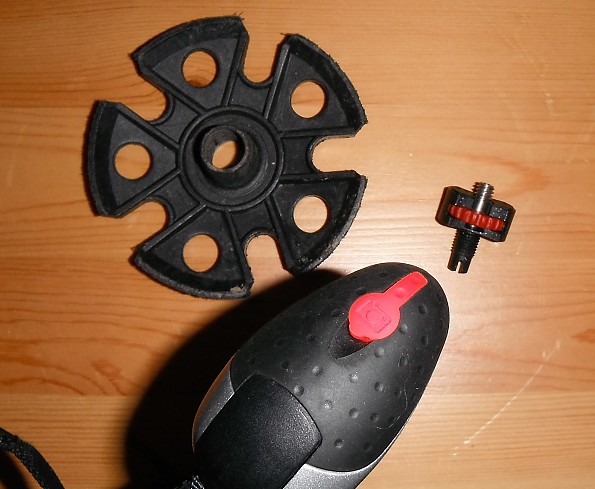 Here is the adapter mounted to the pole: 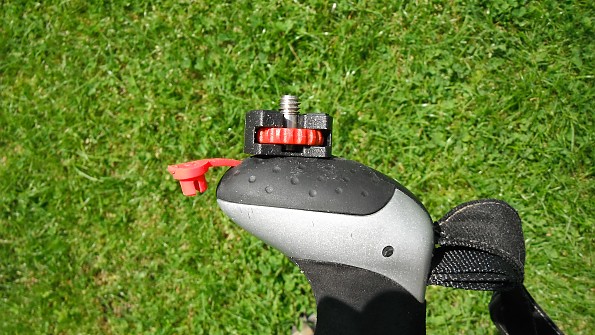 With my camera mounted: 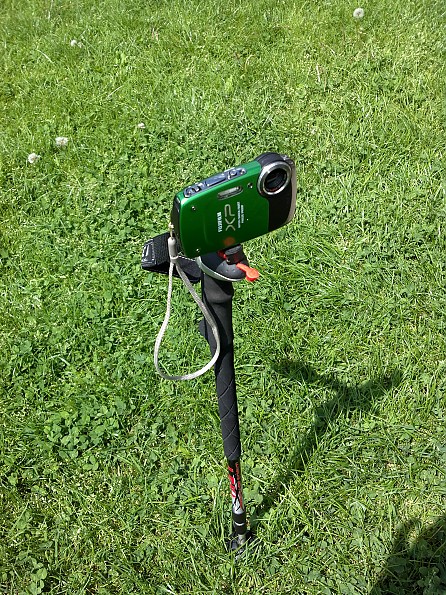 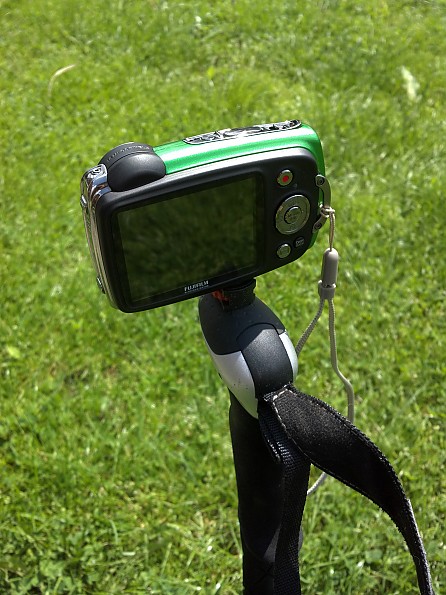 Its a nice little set-up as far as I am concerned.  I also like this set-up for taking "steady" panoramic shots.

I noticed that you wanted a flick lock on your poles...

I use it for all of my trip reports, reviews, and group photos, etc. I still haven't had the problem that Tom mentions with the Super Lock slipping out of adjustment.

Maybe I am just lucky. I dunno.

I have used a couple sets of poles with screw locks, and in order to get them not to slip you had to tighten them to such a point they were virtually impossible to release.

I haven't had any slipage at all with my Easton poles with lever locks.

Where did you find that tripod clamp thing?

Most of the EMS house brand trekking poles have the build in camera mount where you just unsrew the handle and screw the camera on in its place. I have a single pole that I bought from EMS a few years back that I use often when I am going out just to take pics. It works great. I keep a snow basket on it so it stands up better when i cant stick it in very deep.

Leki's are levers........or are you considering the tightening screw that is also there because I agree, my Leki poles have, from time to time, slippes. But they got HUGE use on the trek with often supporting all of this big girls weight for hours on end and not a slip at all in 8 days of hiking.

Leki's are levers........or are you considering the tightening screw that is also there because I agree, my Leki poles have, from time to time, slippes. But they got HUGE use on the trek with often supporting all of this big girls weight for hours on end and not a slip at all in 8 days of hiking.

Leki's Speed Locks are designed like BD's Flick Lock and then they have the Super Lock which is their twist lock like on my Leki's above.

I rip mine apart after every trip and clean them up(locks, tubing, etc.)

I'm a nut when it comes to "preventive maintenance" on all of my gear.

I have a set of Cascade Designs Sherlock Tavel Staffs. These have a camera mount screw under each walnut knob, and consist of 3 sections(per staff), which screw together. These are not then micro adjustable, but then the adjustment mechanism can never slip or wear out...

Another way of doing it is to use the Ultrapod and wrap the legs around the head with the included Velcro strap. That way you also have a table top tripod for self timer shots.

(works better the other end, can't remember why I took that shot...)

So you can see yourself from another angle ?

I drilled a hole in the top of a Komperdell trek and epoxied in a screw to fit the camera.  I have forgotten the size but it is a common item. I have a threaded molded plastic cap with a tether so I don't catch the screw or damage the threads.   Works fine when I need it for a Canon DSLR.

My son epoxied a small compass on the top of his trek pole grip when he was young.  First few days it was the object of a lot of discussion about which way we were going and did it jibe with the map.

'so you can see yourself from another angle ?'

It had to do with that gitzmo that goes at the end of a pole for self timer shots, so I posted that pic to show that you can do that with the Ultrapod too..

Where did you find that tripod clamp thing?

Can't remember, but I found mine searching the web by "mini tripod clamp," then leafing through pix on the results images tab.  You will have many pix to shift through, but it is out there.

Rick, I use my poles in winter and I suspect that they get iced up inside the lock causing the slipping. I've taken them apart and looked to see what was going on, but they seem to be fine, so moisture/ice is the likely culprit.

There are quite literally hundreds of different clamps, monopod/hiking poles, etc to do what the OP asked for. I have one of the Leki poles that Rick showed above, but find it really only fully supports a small P&S, though it helps steady a moderate-sized DSLR (but DO NOT LET GO OF THE CAMERA!!!!). I also have a Leki hiking pole that has the wooden ball on top that screws off, leaving the standard 1/4 - 20 thread (regular stove bolt thread) ready for the camera. The 1/4-20 is the small thread that is on most cameras other than view cameras. The major quality camera tripod manufacturers (Gitzo, Manfrotto, Induro) make monopod/hiking poles that are well designed for holding DSLRs and for hiking (but they are expensive).

Over the years I have acquired an assortment of clamps and tripods (mini and full-sized). The Gitzo Traveler tripod that I have for a small, light tripod, is reasonably steady and still light enough for backpacking, while still being quick to set up. It has the more or less standard hook on the center post to hang a weight on to steady it in fairly strong winds (use a stuff sack and fill it with rocks, sand, etc, or even water if it is waterproof enough). The various Joby Gorilla pods can wrap around just about anything and the larger ones will hold a big DSLR with a long telephoto with no problem, while the tiny one will hold a P&S anytime you can find something to wrap the legs around. I have also made a few customized mounts from wood, using a stove bolt of the requisite length to fasten down the camera for things like doing star-trail and eclipse photography.

You can find all these clamps and accessories in your local camera store, on line at B&H, Ritz, Adorama, etc, and some of them at REI and EMS.

Thanks for all the great responses, everyone!

I am looking for a solution to a couple needs, and this has given me some good places to start.