a well-addressed topic, but i think it's worth considering the small point and shoots with long optical zoom capability.  armed with birthday booty, i was looking to replace an older canon (S3-IS) that is kind of large and initially gravitated toward a canon powershot SX40 - not a DSLR, but it has a 35x optical zoom, which is nice.  it also weighs nearly a pound and a half.  when i explained the intended use, the local camera store recommended smaller cameras with long optical zoom lenses, and i ended up with a canon sx260.  12 megapixel, 20x optical zoom, weighs 8 ounces, and it's small, 1.3 x 2.4 x 4.2 inches.  nikon, sony, panasonic make similar cameras.  i shot some photos and some high-definition video over the past few weeks and am extremely pleased.

to give a rough idea, a 20x optical zoom on a little camera like this is the equivalent of a 500mm zoom.

Agreed.  Unless one is doing pro work or art shots, the better point and shoots are plenty fine for the regular Joe.

Also agreed. While I love to use (learn to use) my Cannon DSLR on backpacking trips, especially for macro, My little Samsung P&S is much more compact and lighter. The photos are good quality, certainly good enough for trip reports, Emails, and such.

I would like to have one of the newer ones with better definition and zoom capability. Mine is 7.2 mega pixels with a 6.3 optical zoom, shoots video, and has a decent macro setting. Of course I'm always wanting something better and it will just have to wait.

First, I'm more of a photographer who hikes, than a hiker who photographs. I own several cameras and a lot of lenses.

Which camera I hump really depends on what I want to do with my photography when I'm out.  Do I want to get artsy and shoot long exposures at night or really wide landscapes, or perhaps concentrate on macro work?  Then I'll take a DSLR, a couple of lenses, and a heavier tripod.

Do I want to just shoot photos of my adventure, and perhaps a movie or two?  Then I'll take a point and shoot and a lighter, smaller, tripod.  (I always take a tripod.)  My current favorite is the Canon G12, but there are many good one out there - even Nikon makes a few!  :-)

But don't discount the quality of the photo you can get from a higher end point and shoot camera.  Just because it's small, doesn't mean it isn't capable.  Yes, the sensor in minuscule compared to a DSLR, but the resolution is plenty good for decent sized prints.  And you can't tell one from the other (DSLR vs point and shoot) if you are just posting stuff to your Flickr account.

Here is a photo I took last fall in Grand Staircase-Escalante National Monument with the G12.  I think it came out rather nice and have a print of it on the living room wall. 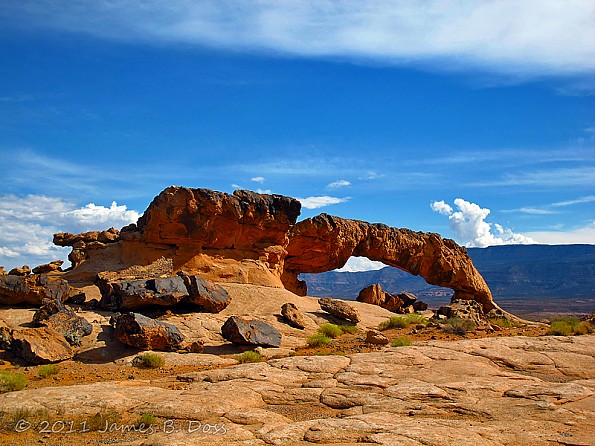 Bottom line is, you don't need a DSLR to get nice photographs, but they do have their place.

a couple of shots from the new camera.  less than optimal shooting conditions, humid and drizzly both on the potomac river and near the lighthouse. 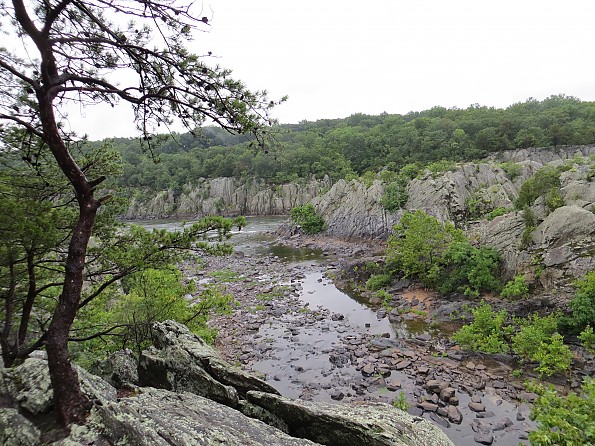 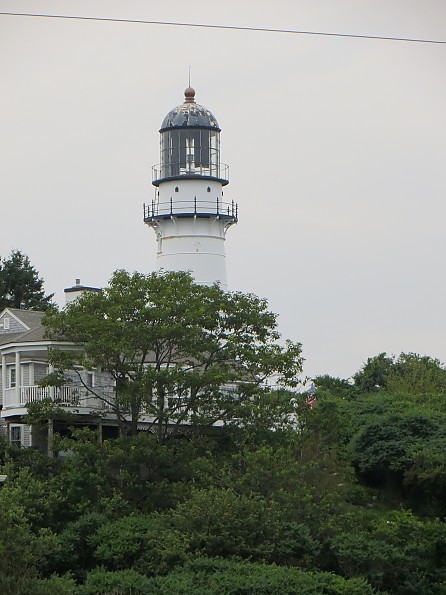 My photos are all used now only on sites like this or on my group website. Resolution doesn't have to be great, since the only purpose is promoting my trips on the internet or showing details of a route or trail conditions. Besides, with digital imaging, I can take thousands of shots and only use the best ones.

I'd have to say I'm a hiker who takes photographs, not a photographer who hikes. I hope I don't annoy the photographers among us, but I kicked one guy out of my group last year because he repeatedly made everybody wait while he set up his shots.

A while ago, I had my old Sony Cybershot (6 mp, with viewfinder and LED display) repaired when the firing button broke off. It cost me $112. In the interim, I bought a whole new Cybershot for $84. It had 12 mp, a panoramic function as well as video and regular programs, and was half the weight and size. The only thing it doesn't have is a viewfinder, which means my battery life is shorter and I can't see the screen in bright sunlight.

Another vote for the Canon G series here. I have a G9 and a replacement G12. I think they're great cameras for most outdoor use. 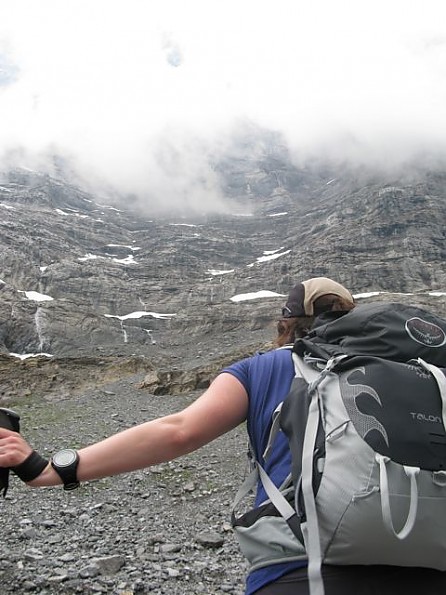 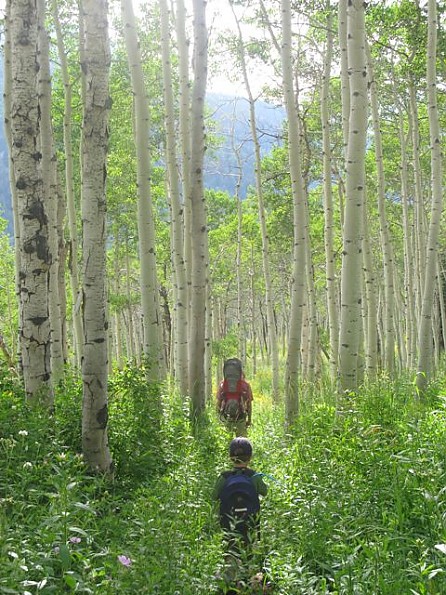 I am going to try the GoPro Hero as my next digital camera. It shoots in video better and the lens is a fisheye style, But I have lots of friends who have them here in Wyoming who say they work great. I would like to do video diaries on my trip.

Gary, there are now a couple of new cameras similar to the GoPro-JVC makes one. I saw it on a website called www.gizmag.com I think Sony has one as well. You might check on a site like www.dpreview.com which usually has the latest and greatest and very detailed tests.

I picked up a SX260 also a few weeks back.  My Canon that went to Alaska three years ago, took a swim in the Kern River last summer on yet another week+, solo bp trip.  It's dried out now, but I see a film on the lense and it has a few minor issues.  The new camera was on sale luckily, so the battery and tax was paid for by the discount.  Love the low light pics, although it has only been used to take a few old stove pics to post on CCS.  Also, I have had some concerns about the weight of my old Canon digging into my neck, the new camera can be carried in the backpacks waist belt pocket. :)

I am going to try the GoPro Hero as my next digital camera. It shoots in video better and the lens is a fisheye style, But I have lots of friends who have them here in Wyoming who say they work great. I would like to do video diaries on my trip.

I have one of these.  Nice little camera.  I find the view too wide, sometimes.  Also, if you use the head/helmet strap and video when walking, you still get quite jumpy video - something I didn't expect after using the camera mounted to the windshield of my Jeep.

They do make a chest harness, too, which might alleviate the camera movement while walking, but I've not tried it.  I bought the LCD back, which makes setting up the camera and previewing your shot much easier/possible.

I personally ruin any camera that has a lense that can get sand stuck in it.  I got to use Pentax Optio for my US Forest Service job and it was great.  There were some minor distortions, but I blame some of them on not using a tripod.  The battery life was decent, but when using flash, it would've been nice to bring an extra battery.  It is a bomber camera.

I did miss the zoom of my old 35 mm camera, but something that size is definitely too big to take backpacking.

My compact camera of choice for hiking is the Canon S90.  I believe the current model is now the S100.  The S series is a more affordable step below the G series.  There are a lot of websites out there with camera reviews but the two that stick out as the best are dpreview.com and kenrockwell.com.  Good luck!

My compact camera of choice for hiking is the Canon S90.  I believe the current model is now the S100.  The S series is a more affordable step below the G series.  There are a lot of websites out there with camera reviews but the two that stick out as the best are dpreview.com and kenrockwell.com.  Good luck!

I agree with Sposka. I have a Canon S95 I bought 7 months ago and now use it almost exclusively. My DSLR sits in a closet. The S95 is tiny and lightweight making it pocketable but it takes incredible photos.

I gotta say I am happy with my Fuji XP. Waterproof, freezeproof, shock resistant, dust resistant. 14.2 megapixel. Last trip I took over 160 pics and only went thru a 3rd of the battery.

Olympus also makes a nice "outdoorsy" cam for a p & s... at least from the specs/reviews it sounds good:

Plus you can add a telephoto lens to it. The example photos on the reviews look great for a point & shoot.

I might be looking into this model in the future. The price is comparable to the S95.

The new Olympus TG1 Tough camera is a great all weather camera. I carry my Olympus Pen camera with lenses for good weather. It is small and light with great quality shots. My tough is my backup for all weather conditions and underwater. I don't like to have gaps in my hiking chronicles while protecting my SLR.

Discussion about it on another board