i saw one of these as i walked past a shiny North Face store the other day.  all i could think was, 'wow.'  i'm sure there are past threads about avalanche packs.  this is like carrying a set of inflatable lungs.  they even LOOK like lungs. 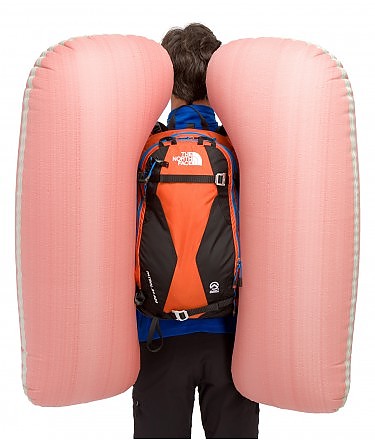 A cool idea, and apparently they work. I suspect that most people won't buy them (a) because of the cost and (b) because of that old 'can't happen to me' mentality.

I'm still surprised by the number of people carrying avalanche beacons, probes and shovels, though, so I hope I'm wrong.

There was a story this past winter in which a skier was caught in an avalanche and he had a flotation pack, an avalung and an avi beacon but still died due to blunt force trauma.

geese...all that money and your still dead...what a bummer! It's still good to see that technology is out there to lower the number of fatalities.

These avi packs are not suited for most true backcountry skiing venues.  The system is bulky, taking up most of the pack's volume, and the system would add considerable weight to an already heavy winter kit.  Alas the avi pack is more intended for the heli ski and off piste sports skiers.

I think Ed is right. I've seen a number of videos on these being deployed. The mechanism does take up a lot of room, so as Ed says, not really for backpacking, but they do work. However, nothing is foolproof.

Ed is correct.Regardless of what gear you have being swept over a cliff by an avalanche is still fatal more often than not.Or being swept thru dense forrest will also cause much damage to ones self.Bottom line is nothing covers all bases but these have saved lives.