My fav is my recently modded Tarptent Scarp 2.

Then I cut down the exterior crossing poles and moved them inside the fly.

Even Henry Shires liked it.

Hands down my Hilleberg Soulo. 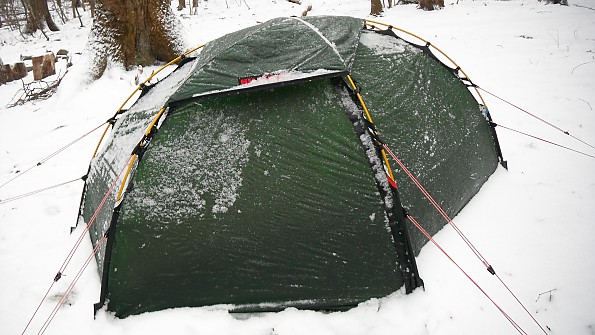 Some say a 1p is small for extended stays/zero days but I have no issues with it. Just enough space for me, my Downmat 7, -20 bag and a lil room left over to stretch if I need too.

No quibbles with the vestibule space either. Swallows my 85L pack and boots with enough extra room that I don't have to crawl over anything during entry or exit.

Plus if the weather gets really gnarly I can double pole it.

I use the same tent year round being I winter in the desert . Its a Mountain Hardwear Meridean 2. 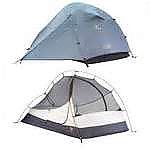 I agree with Rick. Here's my Suolo on a night that ended up dumping another 2 feet of snow: 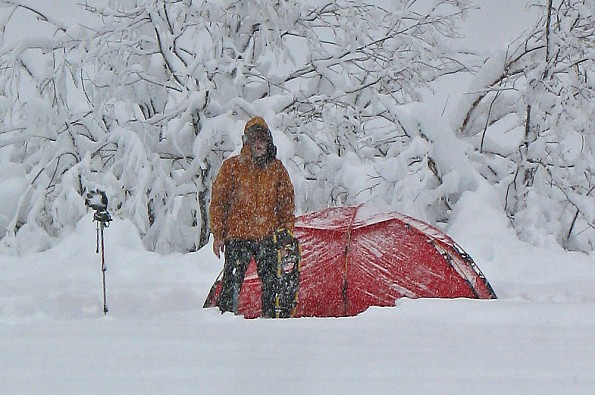 and the next morning after shaking some of the snow off: 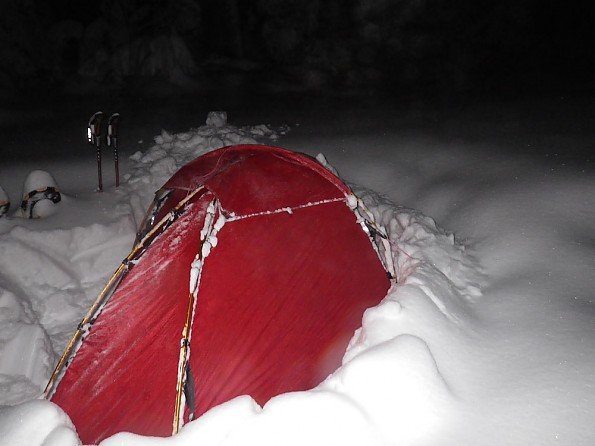 Any idea on how the Unna compares to the Soulo?

I know from direct correspondence with Hille that the Soulo is the strongest solo tent that they manufacture followed by the Unna then the Akto.

My favorite is the Bibler Impotent, though these days I would go with the Integral version. One big advantage is that the tent can be set up while in the tent. Additionally, the steep sides deflect snow well.

Black Diamond has pretty much dropped the Bibler name - same tents, just with a BD label. I think you meant the I-tent. There is a lighter version called the Firstlight. I have the Eldorado, from when it still had the Bibler tag on it - the 2-door version. I believe in having 2 doors on a tent I will using in expedition settings (my Suolo, however, is single door). My first 3-person expedition tent was a Sierra Designs Stretch Dome, the original design which had a mesh window at the back (later the mesh window was zip-out, giving a sort-of back door, and still later a full-size back door), and only a front door. The original design also had a sloping vestibule on the fly. The very first night I slept in it featured one of those Sierra dumps that piled up 3 feet of snow overnight. The sloping vestibule got crushed to the ground under the snow load. Since the zipper was one-way, bottom to top, I could not get at the zipper pull to open the door in the morning. I almost got desperate enough to pull out my knife and cut my way out, but we finally did a lot of kicking and were able to get at the zipper. Since SD was headquartered across the SFBay from me at the time (before they were temporarily owned by The North Face for 5 or 6 years), I was able to complain to the owners in person. They designed a new fly with a separate pole to make a more roomy and upright vestibule with a 2-way semi-circular door.

Integral is now owned by Rab, though the Integral name is still used for the tent and light shelter line that now comes from the Rab Colorado facility, plus some products that continue to be made in Canada. The SilTarps are still made, but not the VBL/emergency bivy (I somehow lost mine at a hostal in Peru, but managed to find a different version that one shop still had in stock shortly after Rab bought Integral). Most of the tents are still made, as well.

Yes Bill, it is the I tent. Todd called it the Impotent, as a parody of the Omnipotent. Todd had made just a couple when a climbing buddy suggested I try one. He was making them in his apartment when he was in school at the UW. I suspect that there were some marketing guys at BD who didn't like the name Impotent. I was moving from an Expedition Crestline, which was a great tent, but heavy and pretty old school. I like the Impotent's ability to go up anywhere, and quickly. Those early ones had snaps to hold the poles which was hard in cold weather and gloved hands.

That Impotent was one of the first with the aluminum poles. His first ones, which I knew only by reputation, used fg fishing rod poles. They were light and easy to put in the tent, but flexed too much.

BD has been phasing out Todd's stuff for years, I suspect because they probably pay him a licensing fee. I think he's down in Bridgeport still. I never climbed with him, but our mutual friend, Mark Thornton, climbed quite a bit with Todd and other folks from the UW...Mickey Shure, Nels Anderson...

Rab does own Integral, but the Integral breathable line is still made in Canada, as far as I know. This may have changed in the last six months, but was true last year. Todd Tex(Todd's version of Goretex) used to be great. However, when BD acquired his line, in order to make it marketable in all states with fire retardant issues, they had to change the material somewhat, which makes it less breathable. Integral got around that because the restrictions in Canada are different. So their current breathable, is as good as the old Toddtex, and more breathable than the new Toddtex. And we can get them here in Washington, though Cali may be different.

I personally went with the Unna over the Soulo. I believe it to be the better of the two tents, "better" obviously being highly subjective. Couple reasons why I think so....more interior height, more interior width, less weight, ability to create a vestibule or not.

Yes the Soulo has three crossing poles making it incredibly strong but in my opinion it is overkill for the majority of backpacking. I have yet to see anything that the Unna can't handle and at less of a weight penalty than the Soulo.

This isn't a knock on the Soulo, and I've never actually gotten to see one in person, but I went with the Unna as I felt it gives a little more versatility.

I love my Akto enough that I'm looking at getting a cuben-fiber inner tent made for it. If I was worried about severe conditions, I'd add a couple mid-panel tieouts and a larger-diameter pole for extra peace of mind...

I have a winter tent question for you.  I have an EMS Tundra Dome which has an outer tent (i.e. the fly) which the poles attach to, and then an inner tent that clips inside.  The inner tent has a thing like a chimney, but in the floor toward one side of the tent.  By like a chimney, I mean it is like a single pants leg, with the end where your ankle would be if you stuck your leg in it tied closed.  The end can be opened by untying the string wrapped around it.  Assuming this isn't so that the inner tent can be worn like a very baggy one-legged pair of pants, what is it for?  Anyone know?

It is an opening for cooking also used by some to avoid going outside during the night... 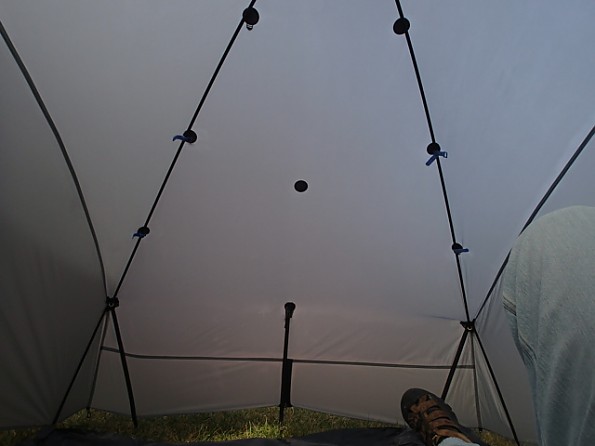 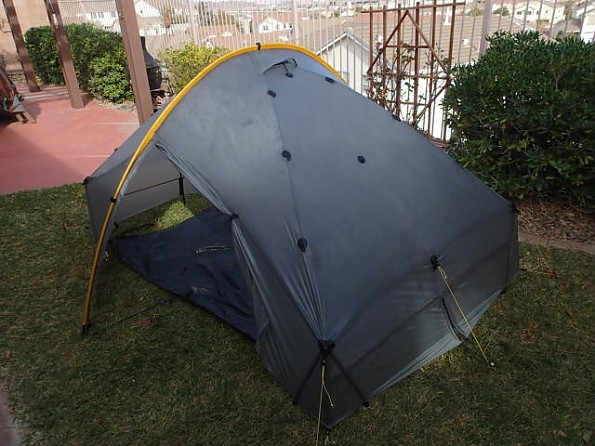 Here's the photo of my modded Scarp 2. Heavier main pole and former crossing poles shortened and moved inside. The ends rest in grommets sewn into the vinyl corner reinforcements (just above the apex of the CG triangles at each corner). This gives maximum strength to the entire structure.

The only cost was $47. for a heavier main pole from Tent Pole Solutions and $2.00 for the Velcro tie wraps.

The shape of the tent with the interior poles in place seems to work very well and look "factory".

I (at the moment) am considering saving up the $$$ to get a larger 4 season tent and Hilleberg's Tarra is numero uno on my list of tents.

Yes it is heavy and yes I would be using it for backpacking(solo.)

I am not a gram counter so before someone out there says "oh, that is way too heavy" please keep in mind that while it may be too heavy for you and your up approach it is not too heavy for me.

The only thing that scares me about modding gear(especially high end expensive gear) is the fact that ya might open the door for the company not honoring it's warranty if one exists.

You are correct about voiding most or all of the warranty. I went into the mods knowing that. I've also modded my Moment similarly over a year ago with that understanding. It's a risk one takes when customizing any warranted gear.

But Henry Shires is a stand-up guy and if Henry also thought a problem was unrelated to my mods I bet he'd fix it. Naturally pole abrasion, corner seam tears, and related problems would be entirely on me.

But to my mind the inner pole support actually spreads out the stress on the fly canopy much more than the original exterior pole setup.  Also I have put extra silicone coating under the fly on the pole contact area besides coating the top area of the fly outside with a 5:1 mix of odorless mineral spirits to GE silicone caulk.

Eric- any idea on the weight difference? Did shortening the 2 inner poles cancel out the added weight of the heavier main? I think this is a really neat idea.

Shortening the 2 Xing poles gave me a whopping 0.2 oz. of "lightness". So yeah, shortening the poles cancelled the increase in main pole weight almost exactly. I had to laugh at the "advantage" I got.

But carrying side and end guylines with their plastic clips and tensioners adds a bit. However if you expect winds and/or a snowload these pre-made guylines are essential safety items. Your hiking/ski poles become part of the guy line setup at each end. (See Tarptent's illustration.)

I suppose I could add a pole inside at each end, crossing horizontally (about halfway up where the end guy out reinforcing patch is) and connecting somehow to the crossing poles at each end of this horizontal pole for even more rigidity but that is just too much belt-and-suspenders over-engineering for me. I like to call that "excessive excess". :o)