scared of the dark

Do you take a lantern of any kind?

I bought one of those LED lanterns, a Primus brand, but it just seems too heavy; maybe the Black Diamond smaller one is best. Sometimes we take a candle lantern, the regular one or the one that takes a tea-light. Usually just a headlamp hanging from the inner tent roof is all that we need.

It isn't the dark that scares me, it's the things that it hides!

For backpacking in anything other than summer, I take a headlamp, always, and usually one of those UCO candle lanterns. An alternative is a minimag light. My headlamps are all Petzls of some type.

Summertime we have 24 hour daylight so illumination is not a problem, unless of course you have a problem sleeping with the light on. Winter is of course the complete opposite with perpetual night and having some source of light is essential. Nowadays, a good headlamp can fulfill all my needs.

I have a little ray o vac lantern. uses four AA batteries, doesn't weigh much. its a great tent light.

candle lantern.  main downside is that the top gets very hot & can damage gloves & your tent by melting holes in them.

i have pondered a battery-powered LED lantern.  they have gotten pretty small and efficient, black diamond has one that takes AAA batteries and claims to provide 24 hours of illumination.  (which is not great compared to any of the half-decent headlamp options that are available).  I try to limit batteries to the absolute necessities, which for me are the headlamp, the GPS, and on some trips the steripen.  so far, the old school candles have been perfectly fine.

Usually have headlamp hanging in the tent. Wearing a headlamp usually makes due for most things around camp and I typically bring a UCO candle lantern for a little campsite illumination. My wife & son don't quite subscribe to the "let your eyes adjust & you don't need a lot of light" theory.

I also do a lot of paddling trips which is a whole other dimension. Weight not being a consideration, the old Coleman white gas lantern comes with and illuminates the whole camp if needed. Gets turned down as soon as my son hits the sack, but it does make dinner/cleanup a lot easier.  I much prefer the light of the campfire & moonlight.

I love the candle lamps. But I have some tents that I can't use it with. So I have a Black Diamond. Batteries are heavy. I just picked up a Storm Master wind-up lamp. It's less weight than the Black Diamond and no batteries.

I like to reserve day light for exploring and leave cooking and other camp chores for darkness.  Thus lighting is an important gear consideration for me.  I carry two high wattage CRE LED head lamps.  One is for personal use; the other I have fitted a small nalagene bottle over the light to serve as a light diffuser, and use this as a camp light, hung by a fish line strung across the camp area.  The light can be positioned along the line wherever light is needed.  Both lamps use the same size batteries.  The head-lamp-with-diffuser as a camp light is a highly effective solution, throwing over 150 lumins.  The added bonus is the camp light is a back-up head lamp should something happen to my primary lamp.

I used to carry a lantern with my first MSR stove about 20 years ago. Now I just use a headlamp. They can be nice tho giving off a whole circle of light and warm the tent on cold winter nights in the Grand Canyon!

Basically, a solar panel and led light in an inflatable plastic 'pillow' that, when blown up, diffuses the light into an area lantern. 3 ounces, 2 settings, flat little package, water resistant, solar powered, and from an altruistic company. $19, but for $27 they'll send you one and give away another. Neato.

A headlight or other flashlight can be shown thru the bottom of a clear water bottle giving a lantern like light system.

I've actually been looking at one of these -  https://www.trailspace.com/gear/uco/mightylite-flip-lantern/   for a couple years now. I figure since we have a "storm of the century" with a week long power outage, at least twice a year now, they can come in handy around the house and for camping as well. I've played with it in Campmor and it seems really solidly made & puts out quite a bit of light. I could do without the gadgety flashlight feature but that's the way it is. I did get a similar little Brunton a couple years ago but it's a piece of junk. Don't like the Black Diamond lights at all either.

The 3-candle 'Candelier' (am I spelling that right?) came in very handy for me post-hurricane, because with three beeswax candles burning under a steel plate, it also warmed up soup and kept tea hot. Could even boil small quantities of water on it. Too heavy for camping, until around freezing, then I don't care what it weighs, it's coming with me.

I avoid batteries whenever possible, so I have a wind-up lantern/flashlight/radio with a solar panel, and another powered by shaking, some kind of electromagnetic gizmo. 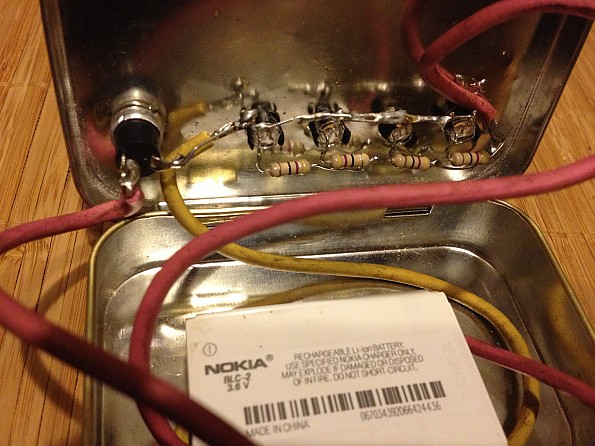 Make your own led light. I used some junk laying around in my electronics box. I get lots of goods from work. I have made several. I gave a lot away. I like to use lithium ion batteries from cell phones. I can get almost 3 day continuous use from Nokia 3.6 v bat with 4 led (can't remember amp rating on led) on 27 ohm resisters in parallel. I even have solar cells on my pack lid. It would take 9 hours of direct sun to charge but my lights don't use that much power all. A 10 x 10 tent lights up well with this light. I have made lighter and smaller. I have use bubble gun containers an a single 360 degree led. I'm still liking my first light best.

Or maybe DON'T copy someone off the internet and build a tent-light using a Lithium-ion or Lithium-ion Polymer.

Royal Mail have stopped accepting these in the post when not sent in a device, as from Jan '13. I gather it is because there is the usual lithium danger if they get shorted when the terminals are not embedded in a device.

Lack of light at night had always been a point of grumbling from my daughter. I use headlamp and pack a candle to use if needed. Last year, I found a string of led "tent lights"... The next time I was out with my daughter, when those lights went on, SHE beamed. It made her so happy- knowing I would never bring them on my own- it transformed our time out together. It's always good for me to remember to " lighten up". Sometimes that translates to carrying little extras.

Eno Twilights are very comforting at night. Just a string of led christmas lights that run on 2 AAA batteries. Not much weight and the quality of light is great! They are quite bright initially and then slowly begin to fade. I left them on non-stop just to test and the continued to emit (albeit dimly) light for nearly 2 weeks! Just a fun, functional design.

Topic: scared of the dark