So at the age of 36 my shoe size has increased from a 46 to a 47... This has effected every pair of footwear that I own so now not only do my work boots not fit me neither do my beloved Scarpa SLs...

Is this normal this late in life?

Oh btw, if anyone is interested in a pair of Scarpa SLs that are in great shape with tons of tread left on them let me know via pm.

I will probably be listing them in the classified section here shortly.

My feet got wider a few years ago.

My ears are probably next.

i'm a decade older than you, and though i have weighed the same for the last 20 years or so, and my feet are still the same size, i am an inch shorter (in  height)  than i was at my peak.  go figure.

Rick, technically your feet do not continue to grow in adulthood after your early twenties. What has happened to your feet could be several things, or a combination. Your arches could be flattening, which could make your feet appear to be larger. Also any weight gain or even exercise(muscle increase) could make your feet larger. Have you been doing a lot of kickboxing? :-)

My feet have gone up one full size in the last decade, and I ain't no whippersnapper.

Rick, technically your feet do not continue to grow in adulthood after your early twenties. What has happened to your feet could be several things, or a combination. Your arches could be flattening, which could make your feet appear to be larger. Also any weight gain or even exercise(muscle increase) could make your feet larger. Have you been doing a lot of kickboxing? :-)

Actually, I took martial arts for quite awhile. With the knee injury awhile back I haven't done much for quite some time now though.

I do work out quite a bit so maybe that has something to do with it. Then again I have always worked out to some degree...

I was dusting off some of my gear with the hopes that I could hit the trail for a weekender in the coming weeks and noticed that my boots were unusually tight.

It kinda made me scratch my head a bit because I have noticed my other footwear have seemed a bit more snug(volume/toe bang) as of late so I went out and was fitted.

I have removed the insoles in some of my footwear which increased the volume a bit so that helped until I can replace them.

I just don't have the cash at the moment to replace all of my footwear. I have 2 pair of work boots that are over $300/pair(Danner Super Rain Forests and a pair of Redwings both USA made.)

in addition to pulling the insoles, perhaps a thinner sock would free up a little more space.

As long as your hands aren't getting bigger as well, Rick; then you should google acromegaly.

My left foot has grown during the last bike tour. My big toe has pushed it way into my shoes tip and I cut a small hole to let it stick out! I am 57. And I have big feet to boot, I am 6 ft 7 inches tall and wear a size 14 hiking boot and a 13 cycling shoe. 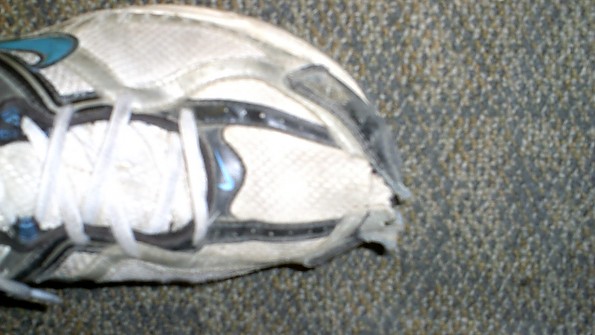 Wait till you get older, Rick, I went from a size 9 in my twenties to a current size 18 in my ARRP years.  Yea, and I can determine my age by the growth rings on my toe nails.

A podiatrist friend sent me this.

Your feet do not keep growing…………… but your shoe size does change. For most of us, our bone “growth centers” fuse, stopping the growth of individual bones during the late teenage years.  As people continue to age, the foot structure and size may change due to an alteration in theposition of the bones in the feet.  This happens due to loosening of ligaments that hold our bones together and also a weakening of muscles that support the structure of our feet.

I've shrunk in height as I've aged, and my feet have flattened out. If I live long enough, I'll look like Mickey Rooney on skis.

I know my wife's feet grow when she is expecting.  Rick do you have some news for us?

Give me a call in a few years when ya get to 48's for Scarpas, I still got mine like new in the box.

I know my wife's feet grow when she is expecting.  Rick do you have some news for us?

Now that ya mention it I do have an unrelenting desire for chocolate and pickles....

so it's a debate about whether your feet are growing or just settling. come to think of it I think mine are just settling. I stopped growing up a long time ago!

Same thing happened to me at about the same age. Same consequences too. Although costly, it did allow me to get new boots including the Scarpa Activ SL - superb boots.