Next on my purchase list...talk amongst yourselves.

Never could find a need for one.  The only things that need fixing on my pack, tent, or pad need sewing, not a screwdriver, pliers or hacksaw.  They weigh a ton.  Somehow I have managed to travel about 700 miles in the last five years without ever saying to myself: "Dang, should have brought that multi-tool."

Everyone carries a multi-tool I think its more of a tradition than anything else. Though I do use the pliers from time to time. I carry a little Winchester that cost me around $10 many moons ago. Haven't ever felt the need to upgrade.

I have two multi-tools, one is about 10 years old the other almost new. Being a cyclist as well as an outdoorsman I use them a lot. One is a Leatherman (Surge), the other a Gerber. Both have sharp blades, pliers ,screwdrivers,can openers, scissors,etc. Between the two they weigh less than a 8 oz and take up little space.

I only carry the squirt in winter when I have either my snowshoes, microspikes, and or a white gas stove. pliers are a critical item to repair these effectively. Bending chain links, extracting twisted pins etc. You could i guess make do with tieing the pieces back together, but it would be nowhere near as sturdy and secure.

So basically i only see a need for a multitool a small portion of the year. No outdoor gear really requires any of the other tools. If you carry one most of the time it would be dead weight.

If you really want to carry a multitool, carry a leatherman squirt. They weight 2oz. Have all of the tools you would ever need in the backcountry. Pliers, scissors, flat and phillips, file, knife. There are different models that have scissors or electrical wire strippers as the main "head" vice pliers.

If your multitool weighs more than the squirt you are definitely carrying dead weight. We arn't running around the woods playing Mr. Mcguyver Rambo, we are backpacking. The fact of the matter is most gear doesn't require tools ever, and those that do technically "need" a tool at one point or another usually have their own special tool that you need.

Three things i can think of you ever needing a multitool for, and they are traction aids/crampons, snowshoes, white gas stoves. Most anything else would only require some sewing or duct tape if they broke/malfunctioned.

Carry a big ole 8oz+ multitool if you desire, but its only worth a 1/4 of that.

I have two multi-tools, one is about 10 years old the other almost new. Being a cyclist as well as an outdoorsman I use them a lot. One is a Leatherman (Surge), the other a Gerber. Both have sharp blades, pliers ,screwdrivers,can openers, scissors,etc. Between the two they weigh less than a 8 oz and take up little space.

Gary, think you have the weight of the Leatherman Surge wrong unless you removed like half the tools from it. Weight is listed as 12.5oz.

The question is what are you carrying it for? I have a Gerber on me everyday at work, and I use it there. But as I started looking at ways to lighten my pack load, I asked myself when have I ever used it when camping or caving? When have I even heard of a situation when I need more than a sharp blade and a pair of tweezers? So I ditched it and haven't regretted it.

A multi-tool typically only makes it into my kit during the winter seasons because of the gear that I am using(ie crampons, etc.)

I have never really had much use for one during the warmer seasons.

My small Victorinox knife with scissors seems to do what I need it to late spring through early fall. 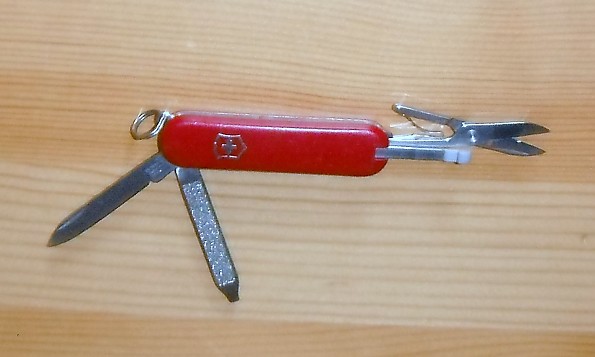 I never needed a pair of pliers to fix a tent, a pack or a sleeping bag and as far as my white gas stove goes there is a tool that comes with it when it is initially purchased. 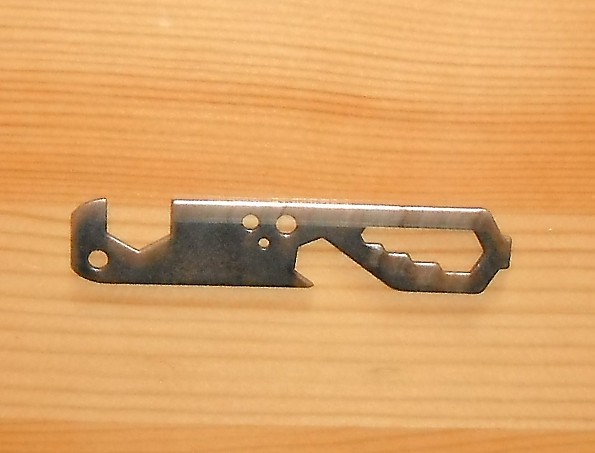 So no need for a multi-tool  there either.

Then again, I also have a hex head(allen) tool that came with my crampons so in all honesty I really do not have a need for a multi-tool at all on trail.

Doesn't seem all that heavy. I see your'e right tho on the weight I just looked it up.

I have an old leatherman PST 2 that I have had for fifteen or so years. I take it car camping, but it stays out of my pack. it has the pliers of course, but thhe handy thing is the scissors. I use those all the time when car camping to open stubborn packages.

i have a leatherman wave.  same one for years.  it is a great multi-tool, and i use it regularly for a variety of things around the house and yard.  it's a big improvement over the original leatherman i had because the knife, saw and file blades lock - a critical safety feature.

for the most part, i stopped hiking with it, for many of the same reasons therambler already said.

instead, i bring a knife (year round) and a small pair of needle-nose pliers (winter).  i carry a small spool of baling wire for spot repairs in the winter and have found that it's tough to work with unless you have pliers.  i also use pliers to adjust snowshoe and crampon hardware very occasionally.

Jonathan, I own the Gerber Steady and highly recommend it! It has all the tools I need, plus it has a tri-pod for a smartphone or small camera. It is definitely worth looking into.

Ashleigh, that is pretty neat. I had never heard of that before. How well does it actually work as a tripod? Is that what you used to take the pictures in your recent review of the Altra?

Rambler, It is a super neat tool. It is VERY sharp! The tri-pod works great! If you look at my Central Virginia trip report you can see it in action. I have used it a lot of times! I did not use it on my Altra review because I always had either my husband or other friends around to take the pictures. 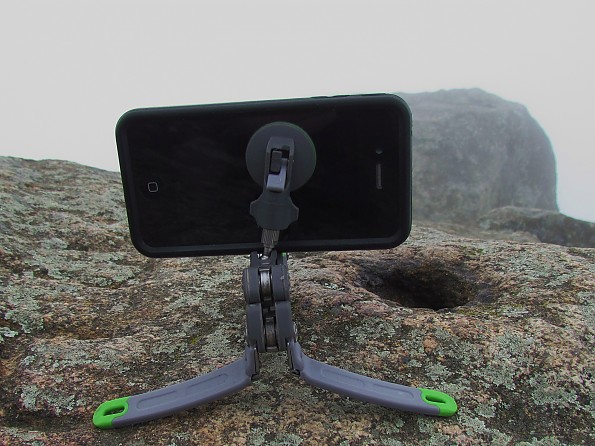 Victorinox and Wenger have completed their merger. Their expectation is that within a year or so, all the "Swiss Army" products will only carry the Victorinox logo and name.

I often carry a leatherman, old-school version but never seem to need anything but the blade.  I decided that its a great item to leave behind.

I know the big knife guys would disagree but I never need much more than a simple pocket knife.  Sometimes not even that much.

When I want to carry a multitool, it is the Leatherman PS4...Spring-loaded pliers and scissors, plus a quite stout 2" blade, file, and various screwdrivers. 2 oz. and 2-1/4" in length.

It has been more than I've ever needed for backcountry repairs. I've used quite a few multitools, and for me this one strikes the right balance of size, weight, and function...just big enough to comfortably fit my hand when doing any repetitive cutting/work.

I know of a mod where the tool is disassembled, and the file--I've never used it--is replaced with a short wood saw...one of these days...

I carry a Leatherman Squirt P4 and either a fixed blade knife or a Cold Steel Voyager. I only have a hunting fixed blade with gut hook at the moment, so I don't carry it as it's just more weight than necessary. I had a SOG Field Pup that I carried for a while, but I lost it when I took a tumble while hiking the Slickrock trail last year.

The Squirt is a great little multi tool, and pretty light at only 2oz. I do some fishing, and I find the pliers and tools are just the ticket.

The Cold Steel Voyager Medium has the most impressive lock back I've ever seen, making it almost as useful as a fixed blade.  I know many ULers and UL leaning folks scoff at carrying two knives and anything larger than a xacto blade, but I find I use my knife constantly. From cooking to cleaning fish to making twig tent stakes, and lots else, I wouldn't do without it.

I just saw this mini multi tool at at Amazon ad; 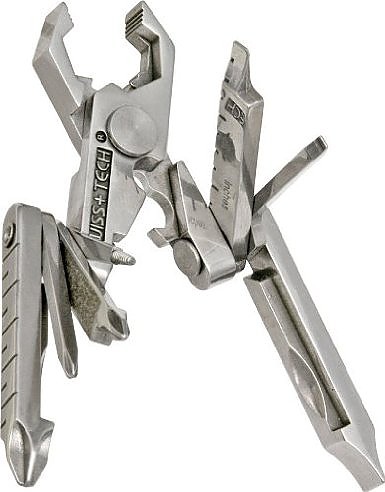 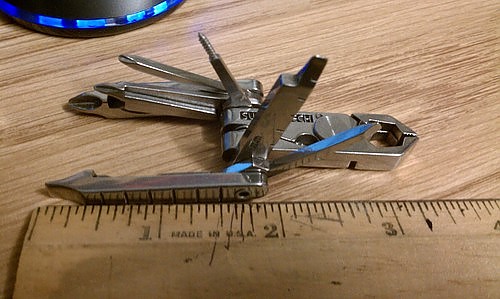 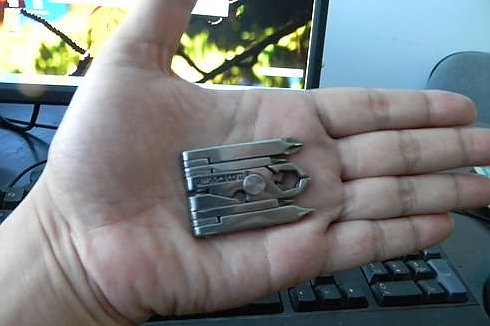 Thanks.  i think i'm going to try and snag a Leatherman Squirt on eBay.

I like them but don't always bring one. The pliers alone are very valuable for things like pulling porcupine quills from a dog's nose.