...Anything I don't know that I don't know? Do they all require an entry of starting altitude or can some sense the start point?

Hi GoG.  Not sure I fully understand your question.  I have a Suunto Core ABC watch.  I have to calibrate if often because it works off atmospheric pressure.  Accurately calibrating the altimeter requires knowing what elevation you are at during the calibration process.

If you want a watch you don't  have to calibrate you will have to go with more of a GPS style watch.    Good luck!

That was exactly my question, Jason! Thank you!

ur welcome!!  There are a lot of options out there.  Hope you find one you like that treats ya well.

ur welcome!!  There are a lot of options out there.  Hope you find one you like that treats ya well.

The big problem with "altimeter watches" is that all of them (ok, there are a couple of exceptions) are "multitools". That is, they have a plethora of functions that have little if anything to do with measuring, tracking, or simply reading altitude. Some of them are so complex that it will take years to figure out all the functions, most of which are useless anyway.

As noted above, there are two general types of altimeters found in wrist-mountable ("watch") form - barometric (most common and have been around the longest) and GPS-based. As noted already, the barometric type require frequent recalibration,while the GPS-based do not.

Barometric - pros: (1) do not need frequent recharging of the battery (and some need no battery at all)

(4) sometimes have an accelerometer sensor (such as a pedometer transmitter that you put on you shoe) to measure distance and maybe speed (needs batteries, of course).

cons: (1) Being barometric, these require frequent re-calibration at known locations or from the local airport's barometric readings, because the atmospheric pressure at a given point varies, sometimes by large amounts, over a given day, in windy conditions (Venturi effect on passes), and, being dependent on the atmospheric pressure, can give very erroneous results since the actual atmospheric lapse rate (relation between geometric altitude and pressure altitude) can depart wildly from the Standard Atmosphere Table. This is especially true at latitudes greater than 70° north or south (think northern Alaska or Scandinavia)

I have seen deviations from calibrating at a known lake in the Sierra to the summit of a peak a couple hours hike up a trail of 3000 ft of 300 to 400 ft (sometimes, it shows me on the peak with several hundred feet to climb, sometimes shows me below the peak by a couple hundred feet when I am writing in the summit register)

GPS-based - pros: (1) accuracies typically within 10-20 ft of actual altitude, which is better than the typical 40-ft contour interval of USGS topo maps. You do not need a map listing lots of well-measured altitudes of lakes, passes, summits, etc to recalibrate.

(2) No large deviations in displayed altitude from incoming or passing storms, high winds through a pass (Venturi effect), etc.

(4) some include "backtrack" functions (usually do not show a map or trail like a full scale GPS receiver, though - the display is too small)

cons: (1) typically use rechargeable batteries that need recharging after 10 hours or less usage. None of the wrist-type GPS "watches" take interchangeable batteries. That's ok for a day hike, if you have a way to recharge the battery overnight (a handy wall plug or one of the portable battery storage units, or one of the thermoelectric devices like the Biofuel or PowerPot stove devices)

(2) usually do not have an additional barometer, so no weather forecasting capability.

(3) You can run into problems with "multipath" (the radio signals reflecting off canyon walls, or other reflectors). Usually not much of a problem as far as altitude measurement is concerned, though.

Of the barometric wrist altimeter type, I have found those from Polar to be the best by far.

Of the GPS-based, I have found the Suunto to be best, with Garmin's not too far behind.

I have had several other brands over the years (I did a review of a Timex barometer-based watch a few years ago - it was ok, but somehow got lost one day hiking in the local hills). Timex has a reasonably good GPS-based watch, though the Suunto is proving better.

Finally decided on this: 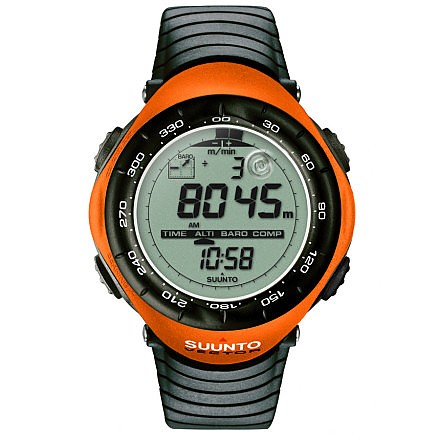 I will review it after getting back from Peru in the fall. Should have plenty of local and international use to give it a good honest review by then.

I hope I will. Wanted to go GPS but for my trekking I cannot count on recharging etc. So will learn this way and know that It will not die on me. It will arrive today so hope to test it on my little training hill tomorrow.  I will also have my Spot Connect running on the trek.

I use a Garmin fenix.  It's funny, I used the GPS functions quite a bit at the beginning of last season when I first got it.  Now I rely more on the barometer / altimeter and some spot usage of the GPS.  Every now and again I'll use the Nav functions if visibility is lost, but that's not typical.  I think these advanced functions are pretty amazing for a watch-sized device.  I'm sold... so much so, I'm thinking of getting the updated fenix2 or tactix and then giving my watch to one of my boys.

Have a great time on your adventures!

I have a barometric altimeter on my gps and I can honestly say I've used it about 5 times and that was when I first received the GPS and I was trying to figure out the functions.  It requires frequent calibrations from known parameters like others have said and I found it to be inconvenient.  I have two other options to determine elevations and that is either from the contour lines on the programmed maps or from triangulation of the gps satellites.  To be quite honest, I leave my gps set so that the elevation is figured using the satellite triangulation.

Thanks Rob. My Vector is not GPS so I will either have to know the contour lines or the GPS. I am hoping it will be convenient enough. I will see. Otherwise it lust looks like a big fancy outdoor watch that cost more than I needed to spend for one. :)

"Otherwise it lust looks like a big fancy outdoor watch that cost more than I needed to spend for one. :)"

gee, it even tells the time!

Yeah, I guess they are!