Anyone use a REI Flash or some equivalent?  My buddy uses a North Face Verto that he carries along whenever we do summits, but I don't really want to spend 80 bucks for a summit pack.  Thinking about justifying the extra weight and hiking in a summit pack that I can bring along from base camp when bagging peaks.  Any suggestions?  Ideally, I'd like to get something under 11-12 ozs or whatever the weight of a Flash 18 would be.  Also, hydration compatible would be a plus.  I was also looking at the Sea to Summit Ultra-sil daypacks but I don't think they're hydration compatible.

I tried using those small packable bags, but found the compromise to be just too much for me. Instead I opted for a North Face Angstrom 20 which I use as a lightweight day pack and summit pack. It packs really flat so you can stick it in your big pack and not really notice it.

It also depends what you need to carry to the summit. I tack on poles, ice axe, crampons, etc.... so I need something a little sturdier than I found those packable bags to provide. Of course the heavier grade you go, the more weight you have to carry.

Thanks @TJ1984 for the advice!  I'm going to use this mainly during warm/hot conditions so I'll mainly be carrying the pack in order to contain a hydration reservoir (I have the first gen Osprey Hydraform 3L), food, and some extra clothes for those summit attempts from a hiked-in "base camp."  Weight is a concern because I'd prefer not to tack on TOO much weight when I hike the thing in with a larger pack into base camp.  Although heavy, the Osprey Hydraform has a nice rigid, curved back which will assist in the support of a frameless daypack.  Plus, since money is always an issue, I'd prefer to spend less than 50 bucks on something versus some of the pricer, more expensive options. Like I mentioned above, I really like my buddy's North Face Verto, but at 80 bucks, I can't justify spending the money.  Last year, I would mainly empty the contents of my main backpack (an Osprey Talon 44), and bring up whatever I needed for a daytrip up to a summit.  This year, I'm planning on some longer trips and I'm going to be using a bigger 60L Boreas Lost Coast bag, so the notion of bringing up a lighter packable daypack intrigues me.

I've gone through some similar gear decisions.  I have three smaller summit packs, and a buddy I hike with has the REI Flash.  Over the years we've compared notes and here's what I've come to:

All told, I would think bringing a secondary pack is too much bulk and weight.  I'd bag the idea.  :)

Thanks for the info @herdingcats!  I was mainly thinking of getting a summit pack/packable daypack for my planned multi-day trip to Mineral King when we would have the opportunity to do alot of day trips from various areas along the little five lakes/big five lakes loop.  I guess if I had a zPacks Blast, it would be a non-issue since they're SO LIGHT!  But, I wound up getting a Lost Coast instead for just over a hundred bucks and the 60L size compounded with the 3 and a half pound weight seems like overkill when daytripping in the the Sierra.

The Osprey Talon 44 I usually use for 3-day trips is manageable when doing a day trip up a summit (I took the thing for the South Sister summit last summer) but it did feel like "too much" bag for the purposes of the summit.  South Sister, with the warm conditions, was also Class 1 so I didn't really need to haul a bunch of gear to be safe.  I'm not very well-versed on climbing in winter conditions and anything above Class 2+ so I was looking for a bag to take with me over fairly easy climbs when I didn't really want to bring all that much stuff.  I'm just thinking of when I did Langley last year at 14,000 ft and my buddy emptying out his Arcteryx Altra 65 and using it as a daypack which was total overkill.

BTW, I read your post in regards to injury recovery and I want to say best of luck to you!  Hopefully you are feeling better.  Injuries suck as you have mentioned.  I had to get ACL surgery last March after tearing my ACL in November 2012 (it took my insurance MONTHS before they would approve the MRI to confirm that my ACL was torn!) and recovery was a real bummer.  I made it a point to hit the recovery process with full force and was able to recover in time for the summer backpacking season.  I'm a big sports/football fan so I figured if Adrian Peterson was able to run 2000+ yds after ACL surgery I should be able to hike some.  Keep us posted on how your recovery goes!

Copy that.  Have fun this summer!

I use the Cold Cold World Ozone for summits.  simple, light (no frame except for a doubled-over foam pad), exceedingly durable (the body of the pack is 1000 denier ballistic nylon).  costs around $100.  a small shop that will customize at your request - this is a stock photo, mine has a pair of webbing chains sewn on so i can attach crampons or snowshoes.

yes, it's an expense.  i guess the question is, how long do you want your gear to last? this thing will give you years if not decades of reliable use. 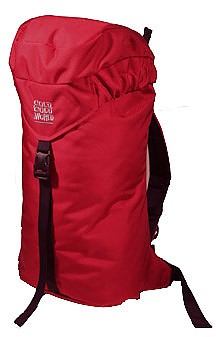 I realise this is a bit late, but for other people that might be looking at more options..

I try to go light with my main pack, so often I don't need a separate pack. Of course this is not always possible, and depending on how much weight you want to bring to the peak, I have a Sea to Summit Ultra Sil Dry Daypack.

It packs up super small. Coated sil-nylon and totally seam sealed dry top. So, your gear should be safe in the rain.

Some compression, and weighs only 90 grams. If I have difficult gear in there, I put a very thin rolled up foam sit pad in there. With that it actually carries really well. Been using it on a lot of flights and train rides over the past year and it has held up really well. No bottle holders on the side or anything, but then again, it fold up the size of a kiwi when I don't need it.

I use it as a stuff sack for my down jacket, or as a pillow, etc in my main pack. 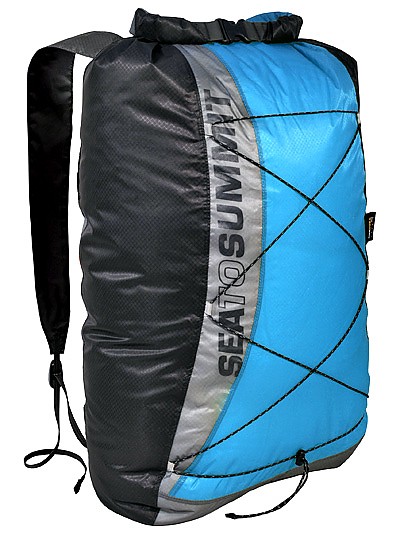 I have an REI Flash 18 which I have used double-duty as a sleeping bag stuff sack and a summit/day-hike pack.  It's worked out pretty well but it's fairly heavy for the way I use it.

More recently I've been using a Sea to Summit Ultrasil Day Pack.  It's extremely basic, but it only weighs 2.5 oz, so it is ideal for how I use it (again, sleeping bag sack + summit pack).  In spite of its light weight, it has stood up so far to one 30-day thru hike and a handful of weekend trips.  I think there's a (or maybe a couple) small puncture hole(s) in it so far.

But this is working out for me so I plan to continue with this one.  And it's far less than the 11-12 ounces the OP budgeted, and serves double duty as a stuff sack.

I use the Cold Cold World Ozone for summits.  simple, light (no frame except for a doubled-over foam pad), exceedingly durable (the body of the pack is 1000 denier ballistic nylon).

I love this pack.  However, it is not light.

Adding to the mayhem: