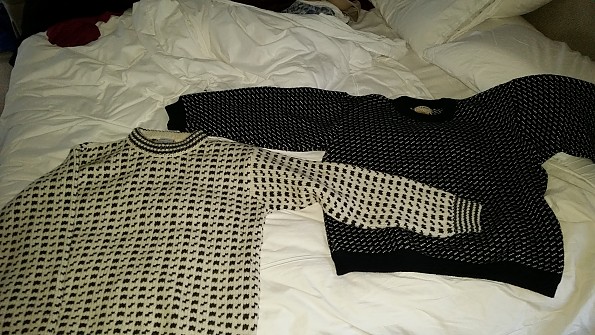 Real one on the left, all wool, from a company called devold in norway. Ll bean one on the right, mostly wool with some rayon blended in. Bean sells a similar sweater now in 100 percent wool. Both quite warm, both cut with a lot of extra room through the torso and shoulders, and plenty of length in the sleeves. The devold has a slightly looser and thicker weave, hence a little more bulk and warmth. Post a photo of your favorite sweater.

DeVold has been around since the Norwegian explorers went to the Pole. I have given them as gifts to several people over the years. Sierra Trading Post sometimes carries them. The only complaint is that they are too warm to wear in a house with forced air heat. My girl is half Danish and she looks especially good in the red one with the traditional pattern on it.

Pendleton used to sell some great domestic versions of these sweaters.  Really dense, heavy, plush wool.  These are one of those items people buy, or are gifted, and never wear, so you can find good deals on them on eBay.  They're suited for specific situations (not sitting around the house), so unless you have those situations, they sit in the closet or drawer until they get to be an eyesore and then are sold for pennies.

I suppose you are both right, but I wear these things regularly once summer cools off. But almost always outside. I prefer heavy synthetic fleece for trips - dries faster, less likely to get damaged.

I don't have a camera handy, but my favorite wool sweaters are the old ww2 british sas sweaters. Absolutely love mine. Always on the search for another real one. There are many fake ones made of cotten or rayon, but the wool ones seem to be vanishing. I love having a wool sweater in winter. Its one of those items i bring without question.

The Scandavians and Brits still sit around in winter in houses heated a lot of times with wood or peat. They are cold by our standards and wool sweaters are perfect. In the US they are mostly used outside. We like wood heat and use sweaters. For outdoor people like on the forum they would get used more. The house is 62 this morning.

I have both sweaters in the photo plus another by Devold in green.  For some years Devold had their US operations based in the Twin Cities and once a year held a massive clearance sale.  My office is cold and I wear a wool sweater daily for about five months of the year.

Crap! Now I want it to be cool enough to break out my sweater. I hate winter, but I love wool!

pine - I grew up with the house pegged at 64 degrees during the day, 55 at night.  not my spouse's preference, but I kind of miss that.

Humans adapt to cold temperatures. Before a winter trip it is a good idea to lower the temperature in the house.

I remember living in northern Arizona over 30 years ago. I drove from my home in Sedona up Oak Creek to the Plateau at over 7,000 feet one spring day in early April. It was sunny with patches of snow on the ground. I met a family of Navajos with 3 small kids. They were barefoot, wearing jeans and flannel shirts running around in the ground between the patches of snow having a fun time at about 38 degrees F. 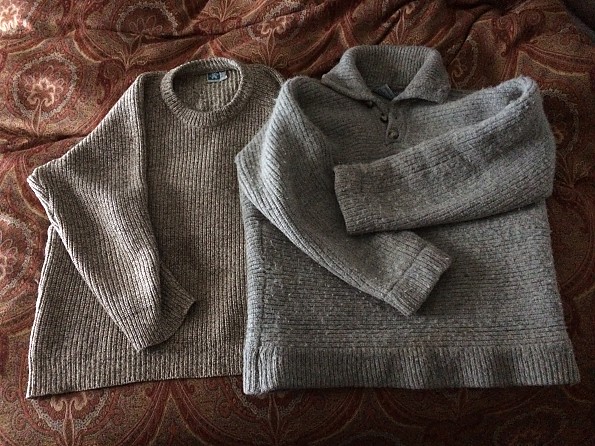 I'm glad I saw this post andrew, because I love wool; one look in my closet will be all the proof necessary. These are two of my favorite sweaters. The one on the left is from Norsewear of New Zealand. When I purchased it some 30 years ago it had that oily, sheep smell of lanolin and was my last bastion against the cold while snowshoeing.

The larger, thicker one on the right is my Dachstien boiled wool sweater. Some of you old timers may remember it. It was made in Austria and is virtually impervious to the elements. This has become my favorite of the two and find this one item to be the first thing I grab in the morning when it's minus 40 outside.

Both sweaters have served me well and outlasted all my fleece jackets.

North, Dachstein boiled wool garments(including sweaters) are still available from Bradley Alpinist. As well as Dachstein, I have a Guernsey oiled wool sweater that is too hot for most activities here in the NW. 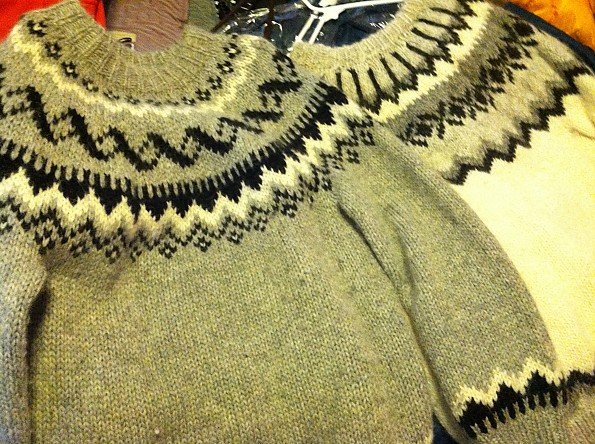 God bless her, my mother made one of these for me. The other, also an Icelandic design, was made by Iceland Sweaters. 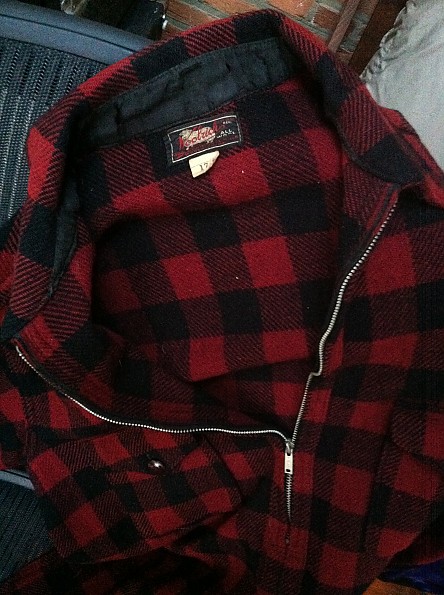 i have a pair of dachstein wool mitts, have had them for a long time.  they wear really well.  used to be my cold weather backups in case my primaloft mitten inserts got wet.  a couple of years ago, i tried them under shell overmitts on a really cold windy day in the mountains, and i regretted it - fingers got pretty numb.  i love them, but they are better for shoveling snow.

sweaters aside, the options for long johns/baselayers and midlayers in merino wool these days are great.  icebreaker, smartwool, ibex do a great job.  only brand i have really had issues with is patagonia - one heavy merino shirt, the sleeve fabric ripped; a lighter-weight sale purchase long sleeve layer is just OK, but the wool is blended with nylon and doesn't feel nearly as nice as the other brand.  and the only pair of merino bottoms i have are patagonia - newer than the shirt, fabric is great, but the waistband is lumpy and not so great. 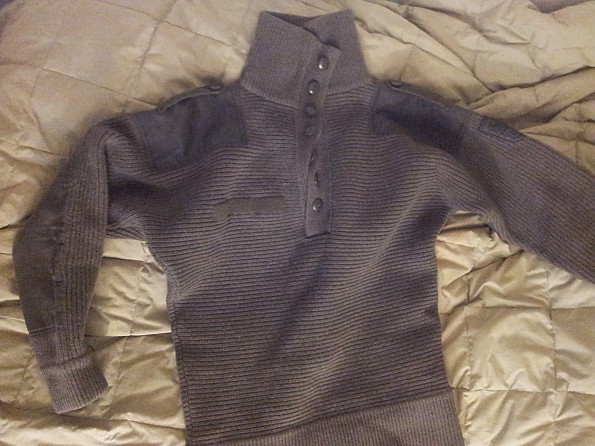 My Dachstein. It is the Uber Guide model they sell over at Bradleyalpinist.com, but with the few changes that make it the Austrian Army version. Boy, is it warm. Remarkably heavy and thick. I washed in a bit more lanolin and then waxed the cotton shoulder/elbow reinforcements, so it does alright in a light rain.

It's just the ticket for processing firewood in winter. It'll be in my will.

This might be a stupid question being as I've only ever lived in semi-arid, warmer climates, but is it necessary to spend $180+ to get a quality, medium weight wool sweater? The sweater just above is what I'm looking for, but $330? Am I paying for the rarer wool or import costs? Is wool demand going up while supply stays stagnant? I'm all for spending good money on quality gear, but the cost of wool has always seemed a bit exorbitant to me.

Devold's thicker sweaters aren't particularly popular in Norway, they're mostly known for their long johns (honestly, you'll probably have trouble finding a closet in Norway that doesn't contain any Devold long johns or wool underwear). The king of mass produced thick wool sweaters here is made by Ulvang, called Rav. I basically live in mine. Not sure how hard they are to get worldwide. Only downside is it's heavy and smells like a dead sheep when it's wet.

over $200 is a lot for a sweater, and a dachstein sweater isn't medium weight - it's a very heavy and very warm garment.  the ones i pictured above are similar, i wear them in colder weather or alone when it's in the 40's (fahrenheit).

look for sales.  older heavy LL Bean sweaters show up for sale on ebay, and the devold sweaters occasionally go on sale on outdoor vendor websites based in Northern Europe.

i can't speak to Ulvang's Rav sweaters, but they look nice and appear to be somewhat less expensive, and maybe a little lighter-weight, which could be a good thing.  the heavy sweaters last for years and keep you very warm, but the conditions where you can comfortably wear them are kind of limited.

Austin, one of the things you pay for with wool, is the quality of the wool itself. There have been discussions here in the past about the the different qualities of man made fabrics from different suppliers. There has been very little mention of the differences in natural fabrics, let alone, how they are processed. As an example, when discussing leather boots, there is little mention of the type of leather. Galibier by Remy-Richard Pontvert has always used Galluser leather, which is a company that makes fine leather out of Swiss cows. What's so special about Swiss cows? Very dense leather, and with tanning by Galluser it is very water repellent and it still breathes well. Wool is much in the same vein. Would you want wool from a sheep that spends its time in Palm Desert, or one that lives up where North is? The latter will be warmer. Then there is the processing. Poor quality wool is often processed removing most of the lanolin. Then the manufacturing. Made in China using sheep wool and whatever happens to run through the factory? Pay a little extra and get a longer lasting garment. If you only use it occasionally, you can save money and buy the cheaper version. But if you intend to wear it a lot, the money you spend will come back to you. That's one reason I like Filson wool garments...they work well and last a lifetime.

More Topics
This forum: Older: Can you help me with a winter sleeping bag selection? Newer: Need Lightweight, Waterproof Boot Recommendations
All forums: Older: FS: Eureka ECW Tent Newer: Off to another adventure...