just read the mini review on the Instaflator and noticed the "can't do it inside a tent" comment.

It can be used inside a tent if it is cut down to about 5' and used this way : 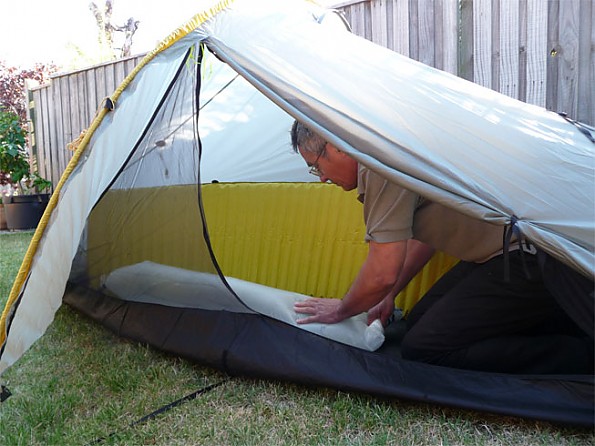 this particular tent is a Tarptent Moment but it is similar in size to many solo side entry shelters.

For front entry you obviously sit at the front with the mat valve at the foot end.

I haven't had any problem using the Instaflator inside even my Suolo. But, I have had an Instaflator just barely touch something I didn't think was sharp while rolling it to shove the air into the pad and had it "pop" with a fairly long split. Turns out that the tube is tapered at the output end, so you can't just shift the attachment tube. Thankfully, one of my local pool supply chains is selling them for $0.66 each. So I have stocked up on a half dozen. Reason the pool supply place is selling them so cheap is that they are discontinuing carrying them. I do not know whether this means they won't be available any more when the supply runs out or whether the manufacturer will keep making them.

The Instaflator does work a lot better than the sleeping pad stuff sacks that have an attachment tube to do the same thing.

I have edited the review to clarify the point I was making which was that I personally don't bother using it when it is raining. While I didn't say "can't do it inside a tent" and was only attempting to explain my reasoning for not bothering with it I can see where the words I used could be parsed to read as you chose to. Hopefully now it is clear that I am making a statement regarding my personal opinion and choice rather than an empirical fact.

Thanks for bringing that to my attention. There is always a danger of choosing words poorly as a writer because you know what you are trying to say. Others, as you've shown, may interpret them differently.

I cut the input end of mine but the output is held togethr with a rubber band on mine following a mod for one of my mats .

The damaged bit was repaired with a piece of clear tape.

BTW, about my mistranslation, it had to do with comments I have seen before about using an Instaflator rather than what was written in you review.

In fact a few years ago I shot a quick video just to show how it can be done inside a tent following a discussion on its use.

In the end I only use it at home to quickly inflate mats for demos but not in the bush because I have the time to do it myself anyway.

I haven't tried the Instaflator but the Thermarest version will work with any plastic bag so if you tear it you can just use another bag of whatever size and shape works for you.

BTW Franco, I hope you aren't inflating an insulated pad with your breath out in the bush. If it is down or synth filled it will slowly but surely ruin the insulation (speaking from experience).

In the bush I either use the Neo Air (yes I do inflated by mouth) or the Exped DM7, that has a built in pump.

I am not exactly new at this...

Topic: Instaflator inside a tent