As long as it attcks from behind or you immediately drop to your stomach. 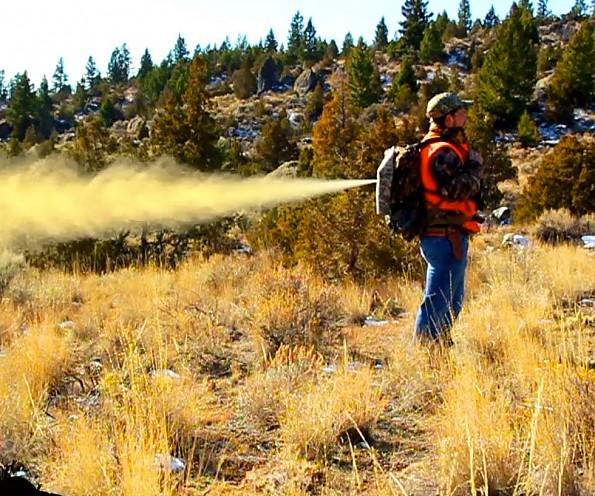 Gary is punking us!

Do not hike behind Gary.

No, it is real. And that fact is in itself frightening! :)

Didn't you hear about the mountain biker last year that had one in Jasper. The bear jumped him and bit his bear spray.

I can easily see this going off on its own or you getting sprayed yourself! Also I don't believe most bear attacks happen from behind? If you want to avoid bears be loud! Hookup a ipod and some speakers and blast music and I'm sure there's a million other ways too. I know quite a few guides and they and I are not fans of the sprays at all .

So if your hiking with Bill either out run him or trip him.....lol.

And be sure the wind is blowing in the right direction!

I've had the pleasure of being hit with bear spray once and the blow back from another incedent  and I'll never carry the stuff.

If that was a little lower it would look just like me after a can of beans.  Now that..might just kill a bear.  LOL

If that was a little lower it would look just like me after a can of beans.  Now that..might just kill a bear.  LOL

LOL! I was about to post the same thing.

a dish rag with dishwashing soap and warm water helps as does milk. water especially cold water does help but not that much...just take the burn....lol

I deal with Grizzlies every spring and don't know anyone that has had to use it. I know a few that have used it on them selves. As a guide in a national park I am required to carry it. Have no problem turning my self into a human skunk. It is actually good for the grizzly. Sure beats the american answer. I have only had to pull it out a couple of times and mostly for moose using the path of least resistance.

Alas, the conditions in which you are most likely to startle a bear are those in which bear spray is least effective. For example, when you approach a feeding bear in deep cover with a strong wind blowing from him to you. He can't see, hear, or smell you. And the bear spray doesn't work well shooting into the wind. Another scenario is during a heavy rain.

The spray works best when, contrary to previous posts, the hiker is shooting downwind, i.e., the wind is at the hiker's back and blowing straight at the bear. However, the bear would have smelled or heard the hiker under these conditions and usually moved away (unless he was feeding on a kill).

Waders, my previous post may not have been clear. When I indicated that using bear spray downwind was unwise, I meant that being downwind of the bear when using spray is unwise. Every situation is unique. Though I carry bear spray, I have had many encounters with bears, some close and some before the days of bear spray, when I may have only had a film camera to protect myself.:-) I have never used bear spray and have been successful avoiding negative encounters by knowledge of bear and general animal behavior. With regard to the bear pack, the designer assumes that you will be running away from the bear and the bear will be close. Unfortunately, your "aim" when running, with the bear running also, will be marginal, at best, unless you've got amirror and can shoot bear spray like Annie Oakley.

I've had to deal with alot of black bears and I don't mind them 1 bit they don't bother me at all. I've been in grizzly and polar bear country and saw them but thankfully didn't have to deal with them. Since I won't be in their area I'm pretty confident that I won't have any bear issues. Now snake and coyotes love to find me and put me in bad situations. If you want to see critters you gotta be quite which means you may sneak up and suprise a bear which wouldn't be good,but if your loud you won't see anything so it's hard to decide. Sprays are not for me and I just really don't see them as a way to stop a angry grizzly or polar bear, I also see them being somewhat slow to deploy.