Hey folks, there is some buzz among ultralighters about a down "throw" available at Costco. I just picked one up and will noodle with it and let you know my thoughts.

It has 700fp down and weighs about one pound. It doesn't have a temp rating but consensus is based on amount of loft that for backpacking it's probably a one-season summer piece, good to maybe 50F. It has no footbox, loops, snaps, or zippers, just a flat quilt so probably would need a little modding to make it a true piece of backpacking gear. But for $19.99 I don't think I can resist! Apparently it's available in many, but not all, Costco stores.

Just checked my local Costco and no luck, rats! Thanks for the heads up anyway.

This color is called "copper", it looks brown or sometimes a bit purplish depending on the light. It was the closest to my eye to an earth tone, which I prefer. Also came in a light gray/silver and if I recall a darker blue: 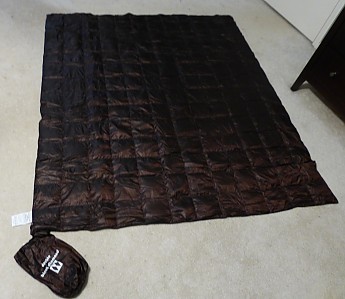 Size is listed at 70x60", my measurements are closer to 67x58 without stretching it. So this would not work well as a backcountry quilt for tall people but fine for snuggling under on the back porch. Not tapered. Baffles are sewn through.

Edge-on view for a sense of the loft. It's similar to what's in my UL down puffy jacket (Backcountry Hadron): 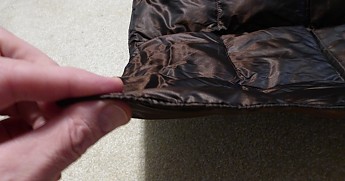 It comes rolled up with this cardboard tube around it: 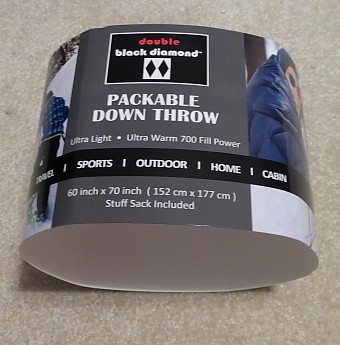 The manufacturer is listed as Blue Ridge Home Fashions in Irwindale CA (Blue Ridge in California?).

Interesting find. Thanks for sharing it.

We were at our neighborhood Costco today. Didn't see any quilts. But there were several huge racks with down parkas, down sweaters, and down vests. The interesting thing was that that the men's down sweaters had the logo and were manufactured by Gerry. Probably most of Trailspace readers are unfamiliar with Gerry. The company was started shortly after WWII in Boulder, Colorado, by Gerry Cunningham, one of several small specialty shops in the Boulder area (along with Holubar Mountaineering, started by Roy and Alice Holubar). Many of the 10th Mountain Division members settled in the Boulder Area, which is why so many climbing gear shops were founded in Boulder. As time went along, Gerry added a baby carrier for the many Colorado climbing families who were adding offspring, the famous Gerry Kiddie Carrier, THE Number One choice of backpacker families for many years. Barb and I carried Young Son in one for a few years until he could hike for himself.

Gerry had a full line of clothing, sleeping bags, tents (a number of which made it into many of the mountain ranges of the world, including being standard for American expeditions to the Himalaya). The Gerry Himalayan Tent was used not only for American Himalayan expeditions, they were the tent of choice on the first ascent of Everest, chosen by the Brits. One Gerry invention that almost every outdoor person has in quantity in their gear is the ubiquitous drawstring clamp.

Like so many small companies, The Gerry brand and logo were sold to a big conglomerate , gradually disappearing. But in 2010, A company named Studio Ray got the logo and rights to the name. They claim to be honoring the Gerry Tradition. We shall see, of course. Eddie Bauer has made a pretty good relaunch. Maybe Gerry will as well.

In looking at the CostCo rack, the parkas seem to be good quality, and are down-filled. However, note that there are 2 or 3 other companies represented on the CostCo rack as well. Only the hooded parka and the down sweater have the Gerry logo on them. The other jackets (a down vest, a women's line (all in pink), and one other have other names. The size choices leave a bit to be desired.

Still, Costco does seem to come out with some pretty good clothing from time to time. I have a couple pairs of glove liners (one a touch-screen glove that works ok with a smartphone and iPad) that are ok and are adequately warm. The clothing, unlike the food items, can be bought in single items, unlike the 5 pound cereal boxes, and month-supply of cashews and trail mix.

Thanks for the history Bill. I lived in Colorado in the 1980s and used to have some great down filled ski clothes from Gerry. They were famous for the divided pack design with compartments and zippers.

Skiing in Colorado can be really cold, as in below zero with lots of wind. WY and MT are even worse. It takes special clothes to be comfortable. Skiing in California is like the tropics in comparison.