Note:  Not really backpack-able unless with a group. At least not weight weenies. But this is really cool technology, and it is called the Guardian.   It will be expensive though, priced at $349.00 (aprox)

I have a MSR Hiker filter as big as this one. They do a great job as long as they stay cleaned. I replaced my original filter once now in the 3 years I have had it.

I wonder where in the Andes they were. A couple of the shots looked vaguely familiar. Considering they were in Huaraz during part of the video and the appearance of the mountains and quebradas, it was probably the same part of the Cordillera we have been sampling.

One thing to note is that they state that the filter will NOT remove chemicals, radioactive materials or heavy metals, which includes most industrial and agricultural waste. I took a good look at many of their river images to see if I could identify the locations (which quebrada - Quechuan word for valley). We (the American Climber Science Program - I am on the Board of Directors) have been doing environmental research in the Cordillera Blanca since 2011. Our base of operations is Huaraz, which they referred to (and pumped some water in a couple scenes from a river that runs through the town - one of the places I definitely recognized).

We take water samples among many other materials. In several of the quebrada, the pH of the water tests in the range of 3.1 to 3.7 - noticeably acid. There are mines around there, as well as industry. 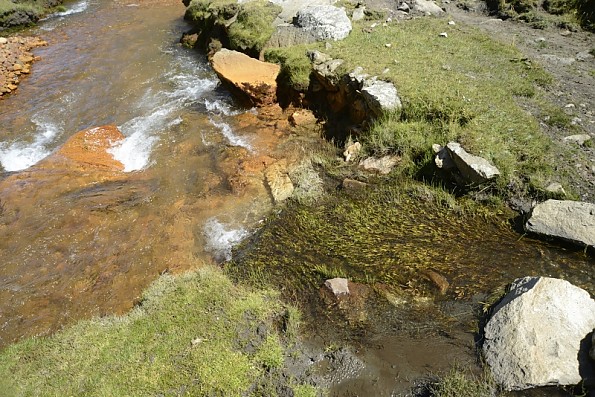 I do not recall the chemical analysis of the water (I am not a chemist or biologist), but I recall being told that the water is leaching "fools gold" (iron pyrite) from the rock higher up, which is volcanic in origin. The sulfur mixing with the water apparently makes for a sulfuric acid (a real chemist needs to comment here), hence the coloration and high acidity. This will not filter out, nor will chemical treatment remove the contaminants.

I was not as sure of the water either, and nothing short of reverse osmosis can remove chemicals.  Or at least I think that's so.  The thing I liked about the filter was how fast it pumped and that is was easy to keep clean, no back flushing.  I wonder how taste of the filtered water is?  I have a filter using the tubes technology, (I forget what they called it) and it leaves a bad taste.

I filtered water once in the Grand Canyon that came from a seep spring. Even after filtering it smelled like sewage, had to hold the nose to drink it. It came from the base of a shale deposit. I had never experinced this before or sinc with water filtering.