Just wondering...what timepiece, if any, do you use?  I am looking for a new one, but have pretty specific criteria:

I was going to grab another cheap watch at the local grocery/pharmacy and cut off the straps again, but thought I would ping you all and see if there are any ideas I haven't thought of....thanks.

Phil M.....I had a watch called The Black Monster...you had to wind it or it would die as it used no batteries it was a dive watch  you could get wet and beat around. You can find them used cheap new still not bad. It makes no noise and you can pass it down as it will last forever. I gave mine away because I have beautiful wind up fossil watch and a beautiful Invicta watch with a mother of pearl face,stop watch, date,ect. So I gave The Black Monster too my sheath maker as I'll either get another or a Rolex Submariner. You could also get a plain Jane military watch. I'd suggest putting them on a necklace or a piece of paracord with a small carabiner and stick it in your watch pocket.

In the winter a watch is useful because of the short amount of daylight.  I like to know how many hours until the sun comes up.

For the rest of the year, it is more relaxing to just go by the sun angle.  My brother once did some business with the Rainbow Family in Seattle.  Their business guy said " we can meet tomorrow when the sun gets to about there" pointing at the western horizon.

I too rarely have a watch when in the backcountry. I don't simmer my cooking items, I heat to boiling, then turn off the heat or remove from the fire and let it cook as the water reduces temp.

I have a phone too, and only turn it on when I want to check  the time early before sunrise and later at night before bed. I leave it off to conserve battery power, making it last 3-4 days before I need to re-charge it or not know the time at all.

I have used pocket watches, wrist watches, etc. But outdoors I never know the actual time, I just gauge when the sun is setting with my fingers and remember the approx time the sun will rise as I travel by bike and backack.

Lots of reasons to have a timepiece, but I can respect your reasons for not wanting to wear a watch. In your position I think I'd leave the band on whatever I used in case there was a time I did want to wear it, but keep it stashed in my pack.

My wife got me a Timex Expedition a few years ago when I mentioned I was looking for a cheap and simple watch for use on trail. It held up really well until I apparently screwed up the seal when I replaced the battery after 3 or 4 years. After that it collected some moisture if I wore it in the shower or in a heavy rain. Since I liked it well enough I bought myself a replacement.

It is a noisy ticker though so can be hard to sleep with right under my head. On the other hand the blue backlit dial is great for checking the time on long winter nights to see how many more naps it will be til sunrise. Bright enough to let you see the time but not enough to  wake you up too much.

For what it's worth I only use cheap watches in the backcountry (less than $20). The last two I purchased were the cheap Timex athletic models from Wal-Mart. When I'm doing long days in unfamiliar territory but on open trail, I estimate my mileage based on time. The last one I bought had a very stretchy band and I wrapped it around my trekking pole multiple times so I can glance at it when needed.

And to be honest, I'm actually on-call for my job 24/7 and I sometimes need to keep up with the time to check in. Hate to admit it, but I bring extra cell phone batteries too; I know pretty much all the places in the Smokies that I can get 4G LTE. I'm careful to not pull out my phone in the company of others (at least not without asking first) as I don't want to run someone's wilderness experience, but the reality is that I could only do a fraction of the trips I do if I couldn't get a data connection.

I've been using Samsung Galaxy S5 and that screen is just barely large enough for me to VPN/RDP in to the servers at work.

I've been trying to kill a Suunto Vector for the last decade, and I just can't, so I keep wearing it. I even dropped it on hard-pack and ran it over with a Humvee, to no avail.

No identifying marks left on it, leveling bubble long gone, bezel polished smooth...and though I wear it often, I rarely even use the damn thing. Like an old dog that can do no wrong, it's just always around.

Mostly I use a Timex 30 lap watch with a velcro strap, with 3 alarms (first one is to warn me that in a while, I need to get up to eat something, pack the gear and get going - second one is "you really ought to get up if you want to bag the peak before sunset", and the third is "your buddies have already left camp".

They are cheap and generally last 5-10 years. And in reality, I use the sun, moon, and stars.

But for special purposes, I use a Polar that has an HRM, compass, and altimeter (newest version has a GPS chip). That one gets most of its use when on a training hike or bike ride.

I use a super-cheap Casio, similar to this. It has a 10-year battery so doesn't need any winding. So cheap that if I break it or lose it then no big deal. Not an ABC watch, but it does have a stopwatch and alarm and little night light. And it's super lightweight, 0.85 oz on my scale (and that's with the straps, cut them off and you probably cut that weight in half).

I use my watch mainly as an odometer, equating time with distance -- so if the map shows I should hit a landmark or trail junction in xx miles I can figure about what time I should be there and then use my watch as a gauge if I'm getting close or if I passed it.

I use cheap (as compared to Suunto) Casio Triple-sensor Pathfinder. Accuracy of its altimeter is better than in my Garmin 60CSx.

Phil personally i chose the timex iron man in the small size. I have a problem with catching watches on things and therefore breaking them. The small size of the ironman seems to work really well and is quite comfortable. Until this watch I actually could not get used to one. This one was gifted to me and i really really love it. actually im about a year in and I cannot remember the last time i took it off. It doesnt seem to get caught on anything, youre able to set a timer and a few alarms and three time zones. Otherwise it does not do much else. It seems to be pretty simple, small, tough, waterproof... works for me i suppose. I have found the same watch at target for 30 dollars. I also actually found that the large womans watch (which comes in a plain white) is a good size also. hope this helps

I use the Casio Illuminator...16 bucks from wallyworld...50 mtr Water repellant and has alarm and chrono....Nothing fancy..I use the alarm for early mornings and I am rough on watches,...I do use it to track mileage but that's about it...I break it or lose it no loss with as little as I paid...

This reminds of the time I was sitting around a campfire with a friend of mine, and he took off his watch and tossed it in the fire.  The flames burned an eerie green and blue.  "No more cheap watches.  Next time I am going to spend at least 15 bucks."

Thanks for all the suggestions...I'll look into a few.

Patrick...now I can see how you manage so many trips. While I am sure it interupts your trips sometimes, I envy your ability to stay connected and on call while getting out on the trail. Well worth the trade off...says the guy who had to cancel a trip to Middle Prong this weekend due to a work deadline.

Ppine...love the quote. Your friend must have used similar watches to me. I had one with a "lifetime" guarantee...All you had to do was pay for shipping back and forth and they would replace it.  Turned out the shipping cost more than buying a new one at 10.99.

I don't even have a watch now, when I'm out and need to be able to keep track of time I use my phone; otherwise time doesn't matter and I go until I feel like stopping or going back. I take pics with my phone so it's usually in an outside pocket.

I bought a Casio G-Shock watch not long after I enlisted in the army in 1986, and when I got out in 1998 it had recently died. Every couple years I had to replace the band either because my copious sweat ate the rubber or it just deteriorated on its own, and after about 10 years the rubber armor on the watch body had crumbled off as well. I then taped what was left of it (still functional) to one of the straps of my web gear for use in the field, because having your watch on your wrist wasn't very practical in the military - you wouldn't want to unseal your chemical gear to check the time, for example. The battery lasted well over the 5 year lifespan that was advertised, I'd have to say it went about 11 years.

Four fingers extended at arm's length is one hour of remaining daylight.  For more precise purposes, I like my minimal GPS (Foretrex 101) which has a super accurate watch, as well as a countdown timer (should be OK for simmering times!)  Nice and light and I know where i am, should that be of any significance.

Frankly, what I like about the outdoor environment is the release of the omnipresent time pressure prevalent back in town.  Who needs a watch??

I'm a watch collector.  I have dozens.  In wristwatches, mostly Vintage (1930s-1960s) Omegas.  I like watches, especially mechanicals (handwinds and automatics).  But for outdoors activities I wear a new watch, a Seiko SKX007.  Seiko's 7s26 movement is one of the most robust automatic movements made today.  No battery to replace.  No capacitor to go bad. 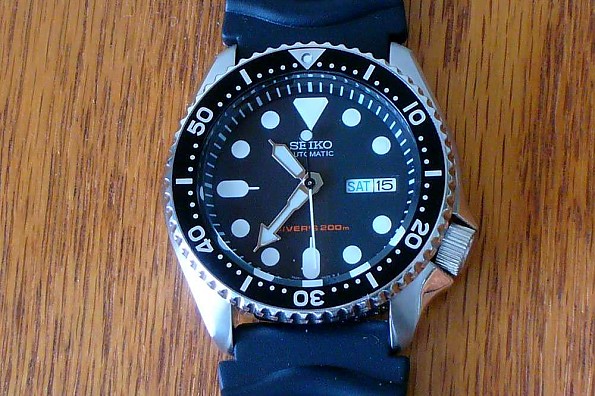 Hikermor should be in charge of time management for long trips with big groups.