I've been convinced to join a team for a day-long adventure race. Foolhardy? Perhaps! It involves trail running, mountain biking and kayaking in the hilly backcountry of central Maine. I need a bottom I can wear for the entire race, most likely a  performance tight. Any suggestions? The race is next Thursday!

Thanks John! I'm really looking for a full-coverage pant. It's going to be a fiesta of thorns, ticks and mud out there!

Anything Powershield should work well. I have an old pair of Patagonia Guide pants made of them to and they're the bees' knees...light, breathable, and extremely water resistant.

Sorry Seth no recommendations; I've considered such tights myself but just can't seem to pull the trigger. I know it's performance wear and perfectly acceptable but....I ...just can't do it. :)

On some summer hikes when I know I'm just going to pour sweat on the way up the mountain, I'll only wear a pair of thin, knee-length underwear for the hot ascent (no shirt) so as not to immediately mess up my other clothes for the weekend and I pretend they're "bicycle shorts" to make it seem ok. But they're really just underwear. Hmm, maybe I shouldn't have shared that....

Seth. you're a beast!  I'm envious of your badassery!

You're going to kill it.

Sorry no tights recommendations though.

I've only used them in winter...I can't say one brand is better than another..I"ve used Nike and brooks ...I was thinking of telling you a 3/4 because its summer..But you posted about thorns...Whichever you get the material is thin and will snag on them..But it will increase body heat...Maybe Alicia will have a good reccomendation...BTW have someone take pics and post them.Goodluck..

Haha. I doubt I'm going to enter beast mode on this jaunt. Thanks for the modesty considerations Patman. I'll probably put on some thin nylon shorts over, out of consideration for my teammates. I'll be rocking my Trailspace hat, and will try to get pictures before, during and after the race!

curious what you chose.  long tights wouldn't be my choice in summer, i sweat too much.  really liked the mypakage underthings i tested under shorts.

my favorite long/winter tights are saucony, i like that they unzip a little at the ankle.

I went with a pair of "Nike Pro Combat" tights. They're exceptionally light. But, I'm expecting to end up exceptionally sweaty anyways.

Pictures to come. I have to say that my Nike Pro Combat tights worked very well. Despite temps in the 90's, they kept my legs at the same level of sweaty misery as the rest of my body. I didn't get a single tick, nor any poison ivy, nor any sunburn. They were a little snagged and wrecked with thorns, but they preformed admirably! 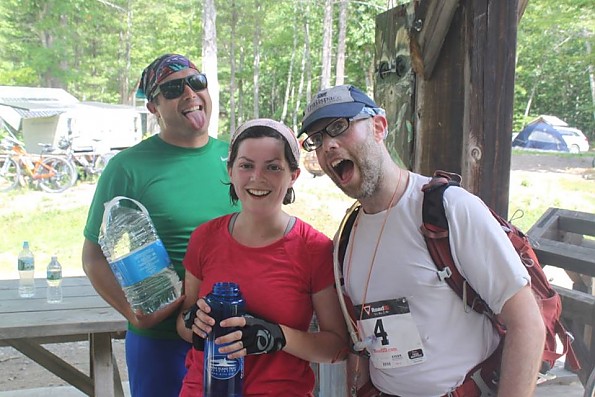 That's me and my team-mates from this weekend's Maine Summer Adventure Race. You can't see the Nike bottoms, thankfully, but you can see that we are all fairly hot after a run, kayak and bike ride in the 90 degree heat.