I'm in Boulder, CO, today, and I went into a gear maker called Red Fox. I'm not familiar with the brand, but I saw this sleeping bag in the back of the store... 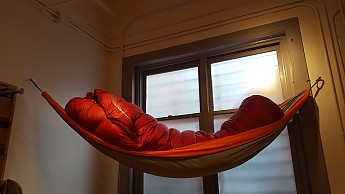 I asked the clerk, what is the rating on this bag? He tells me the coldest temperature ever recorded on earth is -125°F. THIS BAG is rated at -132°F. Personally, I have no desire to test this bag.

This may be the product---

curiously, the bag walter linked weighs about the same as my winter bag, which is rated to minus forty fahrenheit.  the coldest i have experienced is -25-30f.  i'm having some doubts.

Redfoxoutdoor would have to get a sterling reputation from outdoorsmen before I'd look at it twice.  Especially when we have Western Mountaineering and Feathered Friends and Valandre.

I checked out the website and was a little underwhelmed. As many of us on this website know there are a good many other factors which ensure survival at cold temperatures other than a well insulated sleeping bag. Such as being well fed and watered, as well as having a good pad under you. Being naturally skeptical I doubt the claims of most sleeping bag manufacturers but with that said there are a few manufacturers that I trust such as Feathered Friends (a la Walter). I recently purchased their Snowy Owl and, although I have yet to test it at it's most extreme temperature limit, I think it will do me fine for all my future winter camping escapades.

I too have never heard of Redfoxoutdoor either, but judging from the picture of the bag above it looks no thicker than any of my other sleeping bags rated to -40 to -60C. A claim of over twice that would take some substantiation before I became a true believer and, at 5.5 pounds, I remain strongly doubtful.

I have a Feathered Friends bag rated to -40°F/C, which I have used on Denali and in Antarctica, plus a Western Mountaineering 0°F which is the bag I use in Peru in the Cordillera Blanca (Western is located about 7 miles from my house). I have to agree with the posts so far in my skepticism. While Redfoxoutdoor does mention many of the same specs and features as FF and WM list, I have not heard of them before, nor seen them recommended by any of my friends who get out in even colder and stormier weather than I do.

I did look at more of their website. Their given location in Colorado means they do have severe conditions nearby to test their gear. Colorado has in the past been the location of many innovative companies.

I also didn't know the Red Fox brand, but was interested to check it out and its products, since it appears to make a number of highly technical pieces.

It was started in 1989 in Russia by a pair of mountaineers making packs and down jackets: http://eu.redfoxoutdoor.com/about/

It's only been offered in the US for a few years (in limited numbers), but if you look at its EU site, you'll see a huge number and variety of products.

I added the brand to Trailspace, and hopefully some members with firsthand experience will review some of its gear:
https://www.trailspace.com/gear/red-fox/

Highly specialized equipment.  Kind of like talking about .458 Winchesters.

Go ahead.  Call me chicken.

Like purchasing food for cooking for the next day's dinner, one eventually must exit the bag into a frigid environment.  I go forth into wild lands to have fun and personal enrichment of mind and spirit. Sub-zero temps are not my idea of fun. In cold weather, heated and lighted cabins are a good choice; do that.

This is kind of nutty-- a completely unverified and not particularly believable assertion. Why aren't bags subject to controlled testing and given R-values like mattresses? Should we just accept (and debate) manufacturer's assertions about the temperature rating?

I'm sure someone with time on their hands could estimate how much loft a bag would have to have to keep a body warm at -132˚F. If such a thing existed, I think it would be extremely uncomfortable at any temperature in which it is likely to see actual use.

Maybe its technical  design -- possibly, foil dots on the inside of its material -- as well as down give it its Siberian and outer space ratings. :-)

Just looked at their Top Ten bag and yes, it has "silver threads to reflect heat."

This is kind of nutty-- a completely unverified and not particularly believable assertion. Why aren't bags subject to controlled testing and given R-values like mattresses? Should we just accept (and debate) manufacturer's assertions about the temperature rating?

I'm sure someone with time on their hands could estimate how much loft a bag would have to have to keep a body warm at -132˚F. If such a thing existed, I think it would be extremely uncomfortable at any temperature in which it is likely to see actual use.

The EU ratings I believe are the closest to getting an accurate measure of the minimum to keep you alive...So if their on the EU market time to put a google search for their product and what was tested and what standard it passed...

I know nothing about RedFox or this bag but I do know many articles of outdoor gear and clothing, including boots, are far over rated when it comes to cold temps and would be hard pressed to keep someone warm who was sitting still and many degrees above the temperature rating for over a half hour or more.

And why would I need a bag that cold? I have no trip to outer space planned in this lifetime and too much bag is as uncomfortable and possibly as dangerous as too little.

Of course I suppose it could well be used as a cooler or a food insulator or a sweat lodge.

It may well do as advertised but I don't need it.

For camping in a winter season, I'm thinking I wouldn't fare well outside the bag in those extreme temperatures (to which others have also alluded). At that point, though, I'd get an Expedition Suit from Feathered Friends and make it do double duty by sleeping in it!

It's an Everest-type bag, it seems to me, and it's probably great for what it's designed to do.

.."I'm sure someone with time on their hands could estimate how much loft a bag would have to have to keep a body warm at -132˚F. If such a thing existed, I think it would be extremely uncomfortable at any temperature in which it is likely to see actual use."

I was wondering, too, if there is a temp, below which no amount of additional insulation makes the bag warmer.  I am sure this can be calculated, more or less.

Likewise I was wondering if the need for such a bag even exists.  People do not venture out into such environs, you'd burn ANY exposed skin with just brief exposure.

Besides the loft of the bag in the image looks like -20˚F to -45˚F, but then we assume the fill utilized is down or another conventional insulation material.

I'm getting cold just listening to you folks.  My Northface Ul bag is rated to 15 degrees, and I'm NOT going out in anything close to that.  Call me more then

" chicken, " and I'll cluck for you, but I'm raised in SoCal, and salute you folks who can do the colder temps.

I think that salesman just embellished those figures a bit because after all how many will get to test it below -40f or so ?

And after a bunch of weeks on an expedition in extreme cold it is still going to full of ice.

And after a bunch of weeks on an expedition in extreme cold it is still going to full of ice.

One may use VB items to preclude body moisture from condensing in the bag, but that will only slow icing up, however; ambient moisture can find its way into the bag, condense, then freeze inside where warmer layers and accompanying dew point permits such activity.

With weeks of extreme temps I'd consider a hot tent with a woodstove. Would take care of the down bag moisture.  Problem is, many extreme places have no wood.

I've got a little ammo-can wood stove for hot tenting. It's the bees knees for sub-zero temps, and it provides another cooking surface. Takes 16-inch long sticks the size of your arm, or quarters of a 8-inch log.

But yes, save the hot Nalgene trick nothing warms like a wood stove, and it makes up for itself in weight.

"Bag ice" is why I think all down winter bags should have a DWR on the down. And it's precisely why I bought the LL Bean -20 F. bag this week - well,plus the fact that there was a huge sale ("yuge" as Trump would say ;o).

A tent with a wood stove changes everything. A 10 day hunting trip with snow and below zero temperatures becomes doable. So does living in a tent for a month at a time.

In the Arctic you have to bring your own fuel.  Kerosene is commonly used.