I have resolved to review the duffel bags we use at home.  They are more in the vein of getting to and from a hike or trip than anything else, and they hopefully last a long time,  but I think it would be a worthwhile endeavor.

the brands we have used:

-coleman duffel bags.  it looks like Coleman got out of the business of making duffel bags, and that is a good thing.  we purchased them to tote gear to and from our kids' summer camp.  they were inexpensive and huge.  the sewing was substandard, and they were not particularly easy to access or carry.  but, they didn't totally fall apart, and they did the job for several years.

-ll bean duffel bags - my size XL is approaching 40 years old and has one small hole from being dragged for an inordinately long trek.  one shoulder strap to carry a massive bag, a nemesis in airports, but fine for keeping my large backpack and straps intact in checked baggage.  one long zipper, not my favorite, but for long trips or as a cover for my backpack in transit, it has performed admirably.  A for durability.

-north face carry on, a 42 liter version of their bombproof duffel.  it's great.  D shaped opening means easy to pack and access the contents, good integrated shoulder straps.  should last forever.  if their larger duffels weren't so darn expensive....

-first ascent Maximus 90 liter duffel - my current large bag unless I'm shipping my large backpack.  D shaped opening, great shoulder straps, plenty of attachment points.  too early to assess durability, but it appears to be built for the duration.  Eddie Bauer's penchant for sales and promotions made it hard to resist - I got this for well over 50% off - and it has been awesome so far.  I would think about their 150 liter bag if it were on deep discount.  probably not as durable as TNF or LLBean, but more than up to the task, I suspect.

I'm intrigued by Patagonia's black hole duffel.  have read a lot of good things about it.  but can't see paying a lot for a big one when LL Bean sells something I know will be durable for a fraction of the cost.  any thoughts?  same for Wild Things Gear's large duffels, but the one long zipper vs. D shape is a rule-out for me if I'm going to spend that kind of $$.

I've got one of the classic TNF rubberized base camp duffels in the large size, but when I need others I will go with FISH...

(Also really want one of their Deluxe Atom Smasher daypacks...)

Keep it simple.  Army and navy surplus - cheap and large enough for ANY size pack.  Plenty fine for getting gear from house to trailhead.  If long carries required (e.g. air terminals) rent a porter cart or porter.  Even with cart rentals and porter tips considered, still cheaper than Patagtagucci.

What ed said...LOL I did purchase back in the early 2000's a xlarge duffle at target when I was moving pretty cheap...I think I paid 10 bucks for...Nothing fancy I used it now to ship my pack and I have extra room to add my poles and other stuff...I used it 4 times..But my secondary is my issued duffles...They work also...

My only worries with a duffel is protecting my trekking poles from baggage handling abuse.  I haven't done any air travel with my pack in a long time but plan on it later this year. I tested out successfully the ability to fit my treking poles into plastic document carrying tubes that I have for holding full size site plans at work. Seem to do the trick and fit in my duffel alongside my pack.

Can anyone recommend duffels, from weekend size to XL for packs etc that fold into their own pocket or zip enclosure?  I used to have one that would fold into itself and zip closed that would fit into a BDU fatigue pant leg pocket.  I've looked on eBay a few times, but I must not be using the proper search terms.  I find one here and there, but nothing of a large, true selection.

I used to use a thick canvas military duffel when traveling, and I know they now use much lighter weight nylon fabric.  They also used to be less than $20.  I'm sure that isn't the case anymore, but that is still a good, quality option for lots of gear.

The eddie bauer duffel i have reverses and zips into itself.  While this adds a little bit of weight, it is great for storing it when it is not in use.  With a shoe to show size of a 90 liter duffel zipped up. 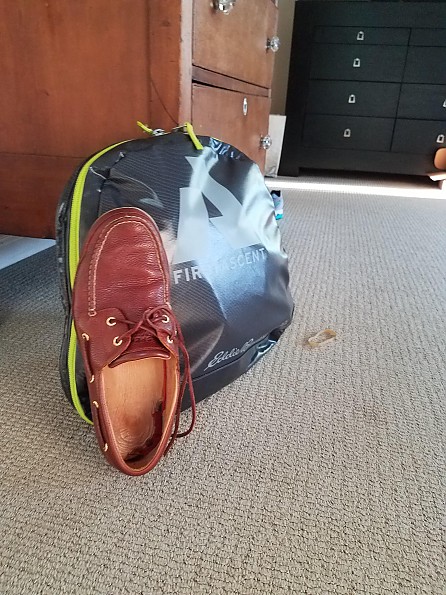 A canvas Duluth canoe pack is very handy for hauling camping equipment around.