The jackets I was looking at are.

P.S.-I don't like down filled jackets. And I don't want to spend a lot of money on the jacket.

Please email me at aniziol@yahoo.com

I certainly don't have the answer to your query - "best" is a subjective judgement, at best.

I can tell you that I have procured fine clothing from several of these brands, especially Patagonia.  I have some of their stuff that has served well for more than thirty years in the pursuits you list, plus mountain and desert SAR, and definitely has been a factor in getting through some tough situations. Marmot is another brand with which I have had good experience, but I have not punished their stuff as severely.

Looking at your list, are there any WJs w/RL's in which you are not interested?  Looks like a pretty comprehensive compilation.  If you wait long enough, it will be summer, and you won't have to decide...

To start off with, remember that "de gustibus et coloribus non est disputandum"

One way of looking at your listed items is that they are all simply a layer system. Although I have a couple of what you refer to as "winter jacket with a removable liner", what I have found best in the long run is to tailor your shell system to the season, rather than depending on "do-it-all-in-one" jackets.

For example, a basic shell system is simply 3 layers - wicking layer at your skin, insulation layer in the middle, and wind-proof/waterproof outer shell. This type of setup is extremely versatile. And as various approaches to gear evolve, you have available an easily modifiable system.

The wicking layer takes care of controlling moisture (your sweat, which needs to be wicked away, especially in tropical climes, but also when you are working hard. This can be synthetic or merino T-shirt or long-sleeved pull-over.

The insulation layer is where the versatility needed for the full range of conditions you will encounter comes in to play. Omitting down which you apparently have something strongly against, actually is very versatile plus has a wide temperature range, plus it can be quickly compacted small to put in a pocket or your pack, or conversely is quick to unpack and put on. Since you have a strong distaste for down, consider one of the modern synthetics in a puff jacket - I have found Primaloft to perform extremely well in a wide range of conditions, and still compacts and fluffs up as well as Primaloft. OTOH, I have found the fleece and woven sweater types of liners, while good in some circumstances, to be somewhat binding of movement and to retain more moisture. However, I use both styles of midlayer, depending on the circumstances.

The wind/water-proof layer can be a simple windshell, or something like fully waterproof, breathable Goretex, or the fabric used in Patagonia's Knifeblade Jacket, which is pretty water repellent - halfway between Goretex and a softshell.

Yes, I have jackets that are exactly your specification of 3 or 4-layer, removeable liner, with waterproof outer shell. And I use them on occasion (usually around town or on a very short outing, like a day of skiing. However when on a multiday trip where conditons are likely to change, I go to a multi-layer arrangement that has multiple thinner and lighter layers - longjohns as the base layer (in cold weather), insulation layer (could be a sweater/soft-shell jacket/puff-jacket with down or Primaloft), and a waterproof/windproof shell, most of which can be stuffed into the pack if it proves too warm.

And, by the way, the basic shell system is cheaper in the long run, as well as being more versatile. Nothing says you have to get everything from a single manufacturer.

Both Bill and I have been to some cold locations, and have experience effectively equipping for them.  I'm with Bill on this one.  I've looked at these ensemble garments but never owned one because creating your own collection of a layering system is lighter, cheaper, and more flexible.  If on a budget consider thrift shops and eBay options.  Often you can get really good gear on the cheap.  Also keep in mind there is no reason to get Big Name brands with certain items.  There is only so much workmanship you can put into a fleece top; otherwise Walmart fleece is little different from Patagonia fleece.  Fleece doesn't wear out if you take just a little care using it.  I've had a crew neck fleece top for 20 years now that has seen me on almost every trip I've taken in the meantime, and it is only now beginning to show some wear.  It is an off brand I picked from a REI customer returns sale bin for under $20.

the only one of these that i have tried is the north face - goretex shell with a zip in fleece liner.  used it between early 1990s and early 2000s, so about ten years.  there were three zip in fleece options - vest, lightweight fleece, heavyweight fleece.  the heavy fleece was the north face's thick denali (300 weight) fleece.  the system worked - reasonably easy to zip in and out, snaps on the cuffs of the fleece so they could connect with the sleeve of the shell.  the north face has a lifetime warranty that it respects; after my gore tex shell delaminated after ten years, north face replaced it free of charge.  minor gripe - the new/replacement shell didn't work with the zippers on the 10 year old fleece jackets, they had changed the zipper design.

columbia offers a bunch of 3 in 1 options, as you observed. it also owns Mountain Hardwear now.  i'm not familiar with the brand, but in general, i think you would probably get a reasonably durable and well-performing jacket from them for a great price; my best understanding, from reading reviews primarily, is that the columbia jackets will tend to be heavier than competitors and may offer less functionality in terms of the cutting edge of waterproofing and technology.  in other words, you could get a nice jacket for less if it performs the way you want.

the north face is expensive.  so is patagonia.  but they both offer great quality and performance and a lifetime warranty, so either find them on sale or swallow the price differential.  this time of  year, there should be some great sale prices.  i think an alternative from LL Bean or EMS will perform similarly; where I usually find these brands lacking is the fit and weight as opposed to the performance.

as with others who responded, i don't use jackets with a removable liner, haven't for almost 15 years.  i get the shell and the liner (fleece or equivalent, such as patagonia's nano air) separately.  if you find things on clearance, this can work financially.  for example: on patagonia's website today, if you aren't particular about color, you could buy their outstanding R2 jacket or R3 hoody fleece for half price. you could wear these under any shell you want; just can't zip them in.  in that you can get either of these for such a reasonable price, i wouldn't look for a used fleece.

if i were looking for a separate technical shell to pair with a good fleece, i would look at craigslist or geartrade.com.

I'll second (third, or fourth) the buy components separately suggestion. Buying a system has its pluses, such as all the layers connecting so that mid-layer sleeves don't turn inside out as you remove the mid & outer layers. But like Andrew mentioned, warranty replacement of one component sometime down the road may result in incompatibilities between components. Or, if you're very warm-blooded like me, you'd never use the insulating layer. Doing research on each individual component and looking for them on discount or clearance sites such as SAC or STP will allow you to precisely tailor your layers to your needs. And you'll probably be able to find outer layers in a wider variety of colors, too.

In this pic I'm about to come out of the treeline on Mt Chocorua NH, into winds pushing 40mph and wind chills of -30F or below. 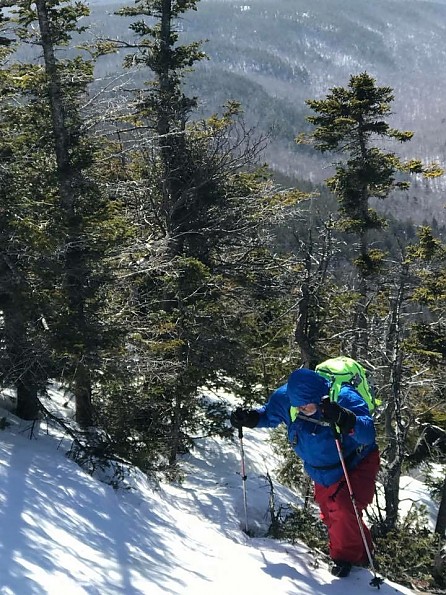 My upper body layers consisted of a USGI silkweight polypro shirt, a Stoic 150-wt Merino shirt (these 2 are what I wore up to the treeline), a medium weight Stoic Merino blend shirt, and an EMS Thunderhead jacket (both put on maybe 100 vertical feet below the treeline.) I also had an EMS Feather Pack down jacket in my pack. I was absolutely comfortable in those temps and didn't feel any wind. Those 4 layering items and the various others I have provide incredible versatility from far below 0F to around 60F, and allow me to dial in exactly what I need based on temps and activity level. Plus, by buying everything on sale or closeout I doubt I spent much over $250 for EVERYTHING I'm wearing here (including the 2 baselayer bottoms & TNF pants.)

If on a budget consider thrift shops...

I second that recommendation. You can do very well with that route. I found a Columbia fleece that retails at $70 with zero signs of wear, sized perfectly and in charcoal gray with dove gray inner collar for three dollars and fifty cents. It is super comfy and has a smoother face to it so it does not bind up with other outer layers. I wore it all last winter and like Ed says, it will not wear out so I'll be wearing it for many winters to come.

If you don't want to spend much you can find shells there if you look as well as synthetic puffy insulation. I've never bought into the 3 in 1 and preferred simple layering of separates. A long time ago I lived in a northern clime that saw -40 for weeks on end and usually no wind and dry, dry snow in winter and simple layering took care of it. It is amazing what you can do with a sweater and windbreaker at times. None of the precip was liquid so we didn't even need waterproof shells but I take one now in the deserts.