A similar thread over at BPL has me thinking about Gear Acquisition Syndrome.

I was in remission for a while there, having gotten my kit pretty well dialed in. Years, even. I was sated.

Then my zpacks summer bag reached the end of its life. Again I was drawn back into the mire...would an exact replacement meet my current needs/wants? A new inventory was taken. Assessments. In the end I pulled the trigger on another 40-degree bag from Joe and clan. Went with the next-longer length to extend the usable temperature range (more room for high-lofting garments) and make it dual-use (An overbag for my 15-degree sack). The higher-fillpower down, and thus lighter down--in comparison to my first zpacks bag--more or less compensates for the added weight which comes with the longer length. Just under 14 ounces.

My stock-taking also identified a gap in my shelter options, so I ordered a Borah Gear tarp a week or so later. A trim piece of top-shelf silnylon 5-1/2 x 9 feet in dimensions. That clocks in at 8.5 ounces with guylines, and should provide enough coverage to to ditch my UL bivy when the bugs die off.

But my biggest wavering was with my shell game. Like most of us I have a WPB rain shell and a uber-light windshirt that live in my pack. I'm gonna ditch them both as much as I can this year in favor of a gen II, Patagonia-made level 4 PCU shirt that I just sniped off ebay. A new-in-bag medium-long! This is a grail find for me. The gen twos (circa 2011 vintage) are EPIC encapsulated nylon of a significantly higher denier than their houdini windshirts, but with a houdini cut. HH of around 400 (3 times that of the houdini), with 25 CFM of breathability (the most breathable WPBs barely manage 1). Perfectly spec'ed to keep you dry even in a deluge provided you keep moving, on account of heat and pressure differentials. That is, your body heat is sufficient enough to push moisture outward at a rate faster than it is allowed in. Pretty stoked for that to arrive.

Anyone else recently have their GAS flare up?

The period that starts when the snow begins to rot and go mushy and ends when the trails are dry enough to stomp on again has become known as Mud $ea$on to me. All the trips planned for the coming months begin to float around in my head and I can't get out on trail to burn off the building excitement. That tends to lead to bursts of acquisition :p

This year that included some wool shirts, a rain skirt, two tarps, a bug shelter, a hammock, UL gaiters and a sitpad. Still waiting on an underquilt to be built, but the trips start in a couple of days so I am hopeful that most of the buying is behind me for a while.

Being I lived for the last forty years mostly traveling and not settled down, I never got into the GAS way of life. I have had many packs,tents,sleeping bags,pad, stoves,assorted clothing, boots, sandals etc over the years, but never more than I needed at one time.

And Gary, that penchant is part of why I consider WWGD (What Would Gary Do?) when debating decisions such as these.

Indeed, you have become something of a mentor to me. Don't let this go to your head now, though I mean it without the slightest tinge of sarcasm. Your philosophies and practices are often a model to me.

Though I seem to possess a lot of gear these days it is because I consume a lot of gear. That is, I use it up, in the course of whatever I'm biding my time with. This is something I know you know well.

Otherwise I make lots of trades! My previous UL tarp, an Integral Designs Silwing, got traded to a friend who took up hammocking. As he turned his back on us poor ground dwellers he found he had a Black Diamond Megalight he no longer needed, so a barter was made.

At the time I was thinking of adventures with a partner in mountainous areas, and so the BD was (and still is) welcome. Now, however, I find myself able to do as much masochistic solo stuff as my heart desires, so I again turned to a deftly-scuplted piece of fabric...an even smaller one this time...

And ladies, just shoot me a PM if you find yourself in need of some time well spent in a Megalight.

lol, thankfully I've also never been afflicted with GAS. I'm really not even a gear head; I just can't safely go to the places and do the things I want without it.

But I hear you on using things up. Most of the gear I use is in the "consumable" class. It seems like something is always tearing, ripping, breaking, leaking, coming unglued or otherwise decaying.

I knew my WPB shell was about done (I retreat it twice a year) when last weekend I placed my cell phone in the ostensibly waterproof chest pocket before hiking out to my car on Sunday in a drenching rain (I thought of the term "super soaker" while in it); when I got my in car and removed the phone, water literally dripped from the case and charge port. Dang it. Luckily it dried out and still works.

So I really do need a good rain jacket now.

Oh I would like new side entrance 2 person tent and a new skillet would be nice. Crap, maybe I am afflicted....

If you get new things so you can carry less are you really getting more or are you in fact getting less?

"I can quit buying backpacking gear any time I want to. I've done it hundreds of times."

(I love to quote myself.;o)

@patman: I hear you! There's accounts of these uber-light WPB rain jackets developing micro-tears in the coating after THEIR FIRST backpacking trip. The added stress from pack straps and hipbelts renders them useless within days.

The mil-spec Houdini I got in the mail the other day (yes!) uses a coating that never wears out, and a DWR that never wears off. The water repellent properties can be refreshed with a plain old wash and dry, just like your usual DWR-coated-fabric-and-PU-membrane rain jackets, but the coating cannot tear through and the fabric will never wet out.

Is there actually a mil spec Houdini jacket?

I have a lot of my kit tied down but do get GAS flare ups occassionally. This year it was a new tent when I already have three of different sizes...enjoying setting up practice in the yard this weekend and looking forward to a trip hopefully next weekend. 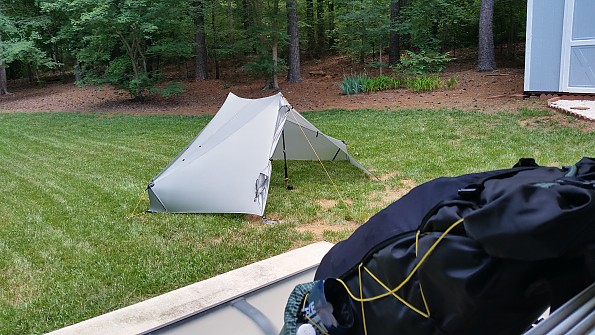 @Ed: Well there WAS one, for a couple years anyway. This is the one I talk about in my first post. It was a windshirt Patagonia made for the PCU system, their rendition of the Level 4. Only the second generation of the garment meets the specs I posted, and only Patagonia's version.

Other manufacturers made Level 4 garments, though the EPIC encapsulation treatment seems to be one of the only shared features; differences in the base fabrics and the tightness of their respective weaves led to wildly different hydrostatic head and breathability figures.

Compared to the standard Houdini, the second generation Patagonia-made PCU Level 4 features 70-denier fabric, thicker elastic at the wrists, thicker thread, the EPIC treatment, and a hood that folds away into a 4-inch stand-up collar. It is cut the same as a Houdini, has a similar chest pocket (though with the opening behind the main zip), and the same adjustable shockcord waist (though with thicker cord and a stouter cordlock).

It weighs around 10 ounces, depending on size. There is no visible logo on the outside, though it does have a Patagonia hang-tag. It is the only generation considered a "mil-spec Houdini" as others switched to a stretchy fabric or changed the cut/feature set.

OK, having returned from a four day family trip I'm going to have to say that GAS is not a bad disease. The BPL folks take an anorexics view when it comes to gear IMO and I consider their sickness far worse than GAS.

Each item I acquired this Spring that made the trip added to our backpacking experience. Numerous times during the trip my wife and I found ourselves commenting about how one thing or another made our time in the woods better. Well researched and strategic acquisitions lower my pack weight while adding function and comfort. If that is sick I don't want to get well :)

@Rob: That's a good thread. The info regarding these things is sparse. What I've gathered was from about a half-dozen threads at BPL, with almost all the useful posts coming from Richard Nisley. For those unfamiliar with Mr. Nisley's work, he's a materials scientist for Natick Labs, among others. He has conducted rigorous standardized tests on a number of garments, and I believe he had a hand in developing the PCU system.

After a couple hundred days of use, he's more or less stated that the second-generation Patagonia-made Level 4 PCU windshirt is his favorite, most-used, and most versatile shell. And it's made in the USA (as is every PCU component, by congressional requirement).