My wife and I want a truly durable two person tent, motorcycling. Weight is ZERO issue. I prefer heavy and well made. Spring, summer and fall. Temps over night in late fall can hit freezing though not commonly. We live in Connecticut, we ride the northeast. No we dont do the northern states in late fall.

I kinda like the REI half dome, also Eureka Combat debt as well.  My fear is I get some nifty nylon thing and the seams pop after a couple years or 5.  I never see the combat rent reviewed professionally. Makes me think its not as good as the REI.

Just want a good TOUGH 2 person tent.weight again is not an issue.

I use an REI Halfdome 2 Plus for canoe trips or basecamping when I share a tent. The 40 Denier fly and 70 denier floor are really tough and confidence inspiring. The Plus is large enough for two adults and the two vestibules provide ample space for gear. The tent is freestanding and the meshy double wall design make it a really versatile tent (I consider it 4-seasons where I work and play). I think the tent is a great match for your needs...as long as volume is not too much of a concern as the burly fabrics and beefy poles are a little on the large size...but I have used it for overnight and weekend trips using both a 30L pack and a 25L pack.

2nd that on half dome 2 plus. *** note*** the seam sealer broke down on mine after 5yrs but I chalk it up to the extreme humidity down here. But it is best bang for the $. And just a good all around tent.

if durability is the ultimate goal, money is no barrier, and you value protection from wind and rain over ventilation, look at Hilleberg tents. very expensive, very durable, very protective from bad weather. not the best choice for a balmy, calm summer night.

I had a half dome for years and it held up well.  Finally replaced it a couple of years ago.  Definitely not in the light category at 6 lbs, I now use the Marmot Tungsten 3P for my wife and I.  It has plenty of room and served us well on camping and short backpacking trips.  Incredible head room and thoughtful features like quiet zippers.  I made a few updates after some decent high wind experience that showed a bit of a flaw with the bent pole design, but I still feel confident it will hold up to 40 plus gusts with just some sag on the windward side.  I bought it for under $200 during a sale and would do so again.  Wouldn't pay the close to $400 list price for it though.

Take Apeman's advice, regarding tent size.  Your will grow to prioritize comfort over almost everything else.  Since weight is not a consideration, there is no reason to get a cramped backpackers tent you can barely sit up in, let alone stand.  Go large as you dare.  When car camping with my wife I haul a large Dacron cabin tent (circa late 1980s).  Big enough to stand in, and ample windows provide good ventilation, better than any of the backpacker tents.  But a full size cabin tent is probably too bulky for motor cycle touring.  As an alternative I suggest getting a 4 person dome tent.  You can stand almost upright in many of the 4P domes, and the additional floor space provides ample storage and relief from the claustrophobic confines of dinky tents.

As for temperature concerns, the only tents that provide a significant relief from the cold are hot tents - tents specially designed to accommodate a stove.  Do realize a thin layer of fabric has almost zero R-factor insulation properties.  Otherwise the primary thermal consideration of a tent is the ability to stop the wind.  Stay away from the bug screen tents if you want to reduce heat loss.

I don't recommend a model or brand, for as Apeman states there are lots of tents that can fulfill your need, but likely the stores in your area will carry just a few of them.  As for durability, tents have a limited lifetime. The sun degrades fabrics, the water proofing degrades with age, and tent floors wear out.  We are talking about fabrics so "truly durable" is a relative thing.  Avid campers (30+ days/year) often need to replace their tent every two to four years.

But you can take measures to extend a tent's life:

So Theo, are you guys riding two up or are each on your own bike.  Obviously, if you are riding two up you will be limited in the amount of stuff you can bring unless your towing a trailer or have a side car.  When I did bike touring before shattering my hip, I road a BMW R1150GS.  It has a front and a back seat so I would remove the back seat and be able to take what ever I wanted when ever I wanted as it had a trunk and saddle bags.

As far as tent's.  I would always carry three.

1.  A bivy that could be used with it's single hoop at the head.........or used without the hoop if necessary.  There is nothing like hitting a mountain range late in the day and deciding that you want to put a few more miles on the road.  But then you get to a high pass in the middle of said mountain range and it starts snowing/sleeting and you can't go forward and you can't go back.  That for me was the right time for a bivy as it's raining/snowing and you need to just cover your bike throw open the bivy, put your bag and pad in and catch some Z's before waking up in the morning to see what the day will bring. 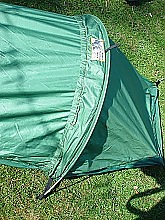 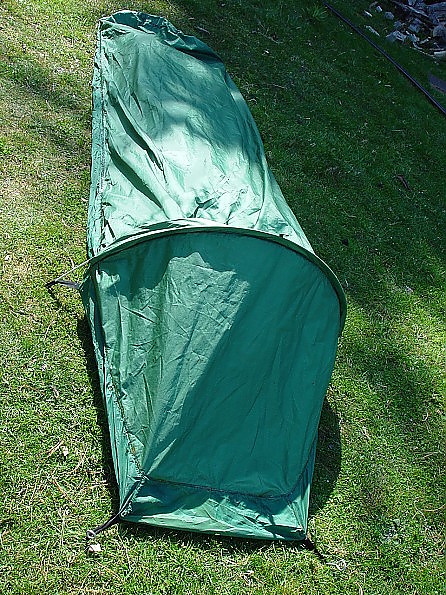 2. A sturdy two-four pole tent.  This tent was used for quick set up if I was only staying in place for a day or two. This tent got most of the use out of all the tents as I was mostly on the move.  I myself picked a single wall, three pole 4 season tent called the Marmot Taku. 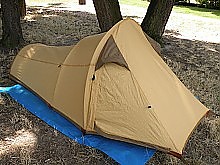 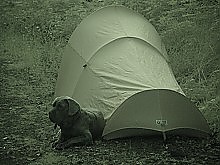 3. The most bomb proof 4 tent that I know is Mountain Hardwear's Double Wall Satellite™.  It's an 18 pound 62sq ft., 3 door ten pole base camp tent that does not have  a vestibule. But can easily handle any kind of weather that I've been in.  Sometimes you may have to  lay up for a while for various reasons and  you'll want the room to spread out your wet gear and have enough room to open up all your gear in an enclosed area.  http://www.moontrail.com/mountain-satellite.php 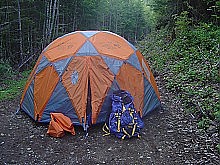 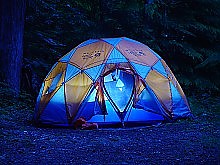 This is what one wakes up to on a sunny morning 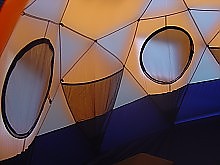 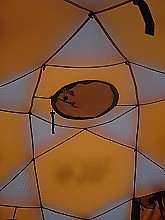 My second big favorite motorcycle tent is the TNF Dome 5: 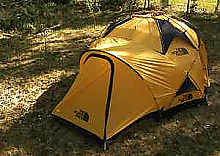 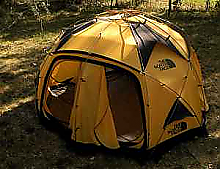 Regarding tents with vestibules.  Personally I'm not a fan of using vestibules other than on dry, dry ground or in the snow.  I've found that every single time............. bar none, that I've used a open floor vestibule on green grass or on ground that has any moisture what so ever...............that in the morning that ceiling of the vestibule was cover in condensation.  One touch of the tent and the condensation rains down on every thing that is stored in the vestibule.  Nothing ruins a wonderful morning like all of your gear getting wet.  If you do pick any tents that has a vestibule, it does not take much to either make a floor for it or have one made for you.

Tarps with poles and tie-offs are a wonderful addition to a bike camping kit. 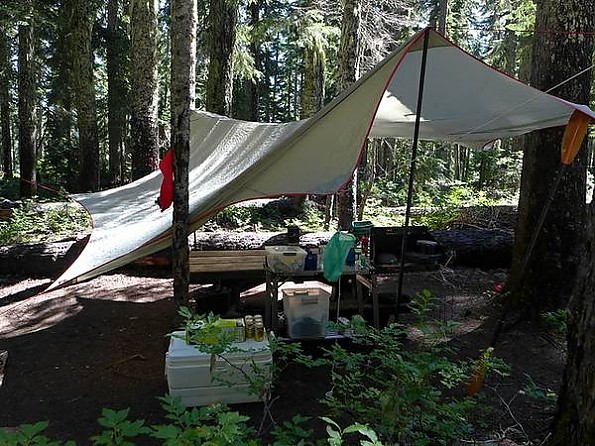 A big, properly placed tarp can make all the difference if your traveling in a place like the PNW where it rains for much of the year.  You can cover your bike(s), all your gear and your tents as well.

A lot of people are really into and liking that large variety of Tee-Pee style tents such as the Golites Shangri-La 3 and 5, Mnt Hardwear Kivi, If you lucky enough to find one at a reasonable price the Dana Design Nuk-Tuk, etc.  Make sure that what ever you get has a solid waterproof floor. 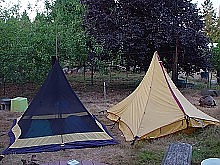 All of these tents are older tents that are not sold anymore with possibly the exception of the MSR tarp.  I found that locally on Seattle's Craigslist for $180.