I just bought a used Sierra Designs Omega CD 2 (circa 2000) w/o a fly. I got a good deal, and was planning on using the fly from my (2009) Meteor Light 2. I took out the fly and washed it in warm water and a little dishsoap in the tub, and hung it on the clothes-line, outside for just a bit.

It was in the full sun when I noticed that the clear, rubber/plastic windows to my fly were coming off (the adhesive had dissolved). This did not come as a shock to me, since I had read of it happening to other owners of the Meteor Light.

So, I cut up my tent bag and put the 11" nylon patches over where the windows were and super-glued them on, but who knows how long that will last. I am back to square #1, then: Since I am unable to find a replacement fly for the Omega CD, does anyone know of an available, high-quality fly that is designed for a tent of similar dimensions/construction to the Omega? I'm not too fussy: I just want full coverage.

The only reference dimensions I can find are a 40" tent height and 37 sq ft. of floor space.

(I would not be able to buy a Sierra Designs Omega CD 2 replacement fly, because it has the same window type as the ones that fell out of my Meteor Light 2 fly).

Not all tents self-destruct in the same manner as their counter parts.  Did you contact Sierra Designs to see if the have a replacement fly that would either be under warranty, or maybe they have a new one on the shelf, one that you could buy?  I just went sent in a fly to TNF for a VE-25 because the window clouded over and then cracked.  They replaced the window, sewed in of course like the last one.  I'm surprised they used adhesive to attach the widow to the fly.  There are a number of places that can fix your fly for you if Sierra Designs does not cover their products.  I'm thinking that it would be far better to just use a proper fly for the tent rather than trying to jury rig a fly from some other tent.  But if you have to, and or feel you want to either have a quality patch sewed over the window or a new window sewn into the fly you have, it is not overly expensive.  But first call SD and explain you problem to them and see if they can help.

I contacted Sierra Designs, and they gave me a discount offer coupon code, suggesting I buy a new tent. I just bought some Seam Grip, and the windows to the Meteor Light tent fly look in okay shape, so I am going to try gluing them back in. Then I'll water-proof the fly in the washing machine and then seam-seal.

Would you recommend having the windows stitched in, even after I glue them back with Seam Grip?

I think this fly will cover everything on the Omega CD, but Kelty has responded to me, saying that they might have a fly to a Grand Mesa (which is a similar design to the S.D. Omega CD) that they can sell me. they are checking their warehouse.

The cracking and clouding of your North Face fly concerns me. Do you recommend that instead of replacing the windows in my fly, that I should just go with some 68D poly fabric? (the super glue did not work at all). Thanks.

I tried to post some photos, but it doesn't appear that they took.

I was not even a bit concerned about the TNF VE-25 clouding as that is the weak point on that fly as far as UV rays affecting it, though UV rays will negatively affect most any tent materials.  There are some more expensive tents that use materials that are effectively much more UV resistant than others.  One of the reasons that I buy certain tents, is that without question, they have life time warranties and they honor those warranties.  Anything that goes wrong with a north face tent they will fix if it is fixable, or offer a replacement coupon for a new tent of similar quality.  Along with the VE-25 fly................I sent in a 30+ year old Sleeve Oval Intention that need it's door zipper replaced.  TNF replaced not only the door Zipper but also the door netting zipper at their cost and mailed all of the stuff back to me in the same box with new foam spacers, again at their cost.

I would have suggested that you would have had the window covered with either new window material, or material that was the same as the material as the fly.  Most tents have stuff bags which are of lesser quality material than the fly of the tent but there is know way to know that unless I had the fly in hand.

First, I would do nothing until you hear back from Kelty until you see if they have the fly.  Second, make sure 100% that they fly will fit your tent or that they will at least let you return it for a full refund if you find it does not.  Make sure they will offer you a cash refund instead of a credit.  Know that it will also cost to send it back.  It would really really good deal of a tent and a fly that you cannot use!

You will not be able to find a fly by just knowing the square ft. and height of a tent.  One of the purposes of a fly is that it is the exact same shape of the tent body for maximum strength as it hugs the entire tents pole structure all the way around the body of the tent, with many having a vestibule in front as well as some in back.  What you will find is that if you have loose spots in the fly on the tent that those loose/saggy spots will act like a sail on a sail boat in the wind, and or in the rain/snow will collect water/snow and make it such that you constantly be getting out of the tent to clear it off or worse crus collapse the tent.

So, here is another way to attack this problem.  Sometimes when we think we got a good deal we find out that we really did not, after all.

If I were doing this.  I would watch Ebay and Craigslist until a Sierra Designs Omega CD 2 came up for sale.  As it is starting to get late into the summer old tents go way down in price as the year goes on with the best time to buy a tent in the middle to end of winter.  What your doing is like telling me that because you got this good deal on a Chevy.....................that does not run, your going to try and put a Ford engine your good deal of a car.  If you buy another Sierra Designs Omega CD 2.................then you will have a properly fitting fly along with a parts tent.  So, if your experiment of using your old Meteor Light 2 fly does not work................Have you set up the newer CD 2 tent and tried the fly on it yet?  Then I myself would look for another CD 2 tent.  Another advantage of buying another CD 2 is that you would have the windows in the fly that were their in the first place.

Regarding the windows.  I most certainly would find a qualified person to sew the window patches in, making sure of course that is the material you really want on a fly.  If you want to keep the material in that you've glued in, then have the patched area gone over and sewed in.  If it's not the right material then cut that material out and use the proper material and have it sewn in.  Once sewed in I would then re-water proof the fly and then re-seam seal any part of the fly that needs sealing paying particular attention to the window area's, both on the inside and the outside.

Just out of curiosity what is the purpose of this tent?  As in, single day in hikes/camping, winter camping, car camping?  Month long trips into the wilderness? 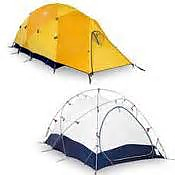 Hi apeman, thanks for the tip on The North Face. That is indeed a good warranty, if honored. I have had extremely good luck with Eureka's customer service, as well. I'm considering the Eureka Taron 2, even though its a 3-season.

I tried to glue the Meteor Light fly windows back with Seam Grip, but it did not appear that the bond was consistent or effective: I just had no way to apply even pressure to the area to be mended without risk of adhering the weighing object. It just turned into a mess, so I cut my losses and threw it out.

I am there-fore hoping for a fly without windows, but I think I'll do what you say and wait for another Omega CD to show up online and buy it. Maybe the window will be stitched-in, this time (rolls eyes).

I appreciate what you are saying about specificity in regards to the tent/fly combo.

Even so, I thought I could get by if I had an improper one staked out well enough. I think I'll let this fly-less tent sit until I can find a proper covering for it, per your recommendation.

I leave a 2-person tent at my camp all summer, and also want something in case of emergency, even in winter (I'm in Maine).