how is a backpack supposed to fit over the shoulder?

Hi, I recently bought a backpack that feels comfortable otherwise, but there is a slight gap between the shoulder and the straps that I'm not sure if it's supposed to be there., almost like this: 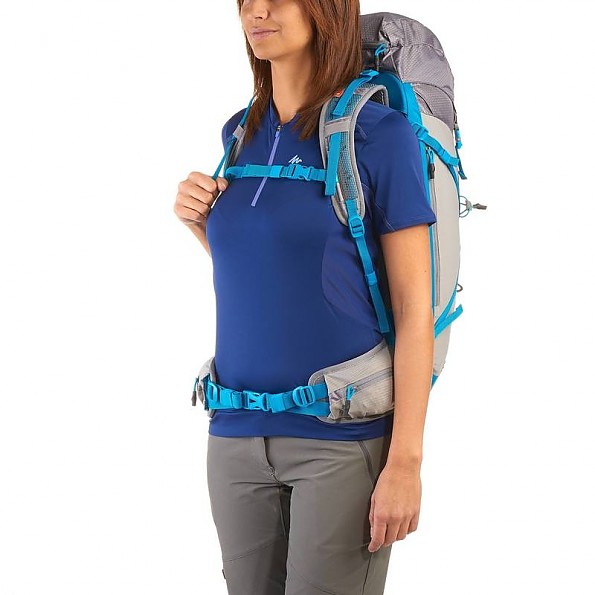 Is this how it's supposed to be or did I buy a backpack that doesn't fit me? I've no previous experiences with backpacks and wold appreciate a little help! I'm sorry if this is a bit unclear!

Not enough information to answer. It could be that the pack doesn't fit you well, or that it's the wrong torso size, or it's made poorly, or you're trying it on empty rather than loaded with your gear, or that you haven't adjusted all the straps properly, or you are wearing the hip belt too high...etc.

Thank you, JRinGeorgia! I was indeed trying it on empty more or less (just a jacket and a blanket stuffed in). I just packed it with almost everything I want to take and it fits well on the shoulder now.

Different packs fit differently also, there is no real standard. Some packs are designed to intentionally lift the straps off the top and back of the shoulder while some are in fact designed to wrap and have more contact.

For example the Kifaru hunting and tactical packs are designed to lift (this is a proper fit according to their fit guide):

The Mystery Ranch packs have a shoulder yoke system intended to wrap the shoulder:

Here is an old photo of me wearing the MR Trance and this is also a proper fit:

If a pack has load lifters that actually work and are capable of lifting the load, then you will have a gap on the shoulders. If the pack doesn't have functional load lifters it will wrap your shoulders.

The majority of packs in the market simply move the load forward and backwards with their load lifters and slightly change where the weight is on your body, or only slightly lift it. It's not neccesarily a flaw/bad thing, but it does result in the shoulder straps being more of a "wrap" fit.

It comes down to personal preference. For me, I find packs with real load lifters about 1000% more comfortable after a couple hours on the trail. I have had both kinds and tried many different brands and models of packs but finally settled for a Kifaru pack for that reason.

Whether they "work" or not it really comes down to comfort. I find that especially with a pack loaded down on the heavy side that my shoulders can start to hurt after a couple hours. Having functional load lifters let me easily shift the weight around for maximum comfort. I can have it all on my hips, split it between my shoulders and hips, go more shoulders if my back is getting sore. Its all just personal preference on pack fit and your comfort level. With a pack loaded lightly, say less than 30lbs it makes little difference either way.

It is supposed to be there. Shoulder straps on a good fitting back really don't come in to contact with your shoulders much.

If your load lifters are pulled tightly, along with your hip belt being pulled tight, you shouldn't have any weight 'pulling' down on your shoulders. The weight should fall on your hips.

I prefer that most of the pack's weight be on my hips.  So initial adjustment of the hip belt is where I begin.

If there is zero weight on the shoulders (which occasionally feels wonderful), then the shoulder harness plays little role in controlling the motion of the top of the pack, as I walk or climb.  I typically adjust the upper anchor points of the shoulder straps, as well as setting their tensioners, so that about 1/4 of the pack's weight is borne by my shoulders.  I want the pack to closely follow my slightest body movements, and have little leeway to rock or jostle.

As others have stated, all this fuss is a matter of personal preference.  Loosening or tightening the shoulder straps, or adjusting the load lifters is something that I seem to fiddle with as I go, mostly in response to fatigue.

Good internal frame packs are designed to carry most of the weight on the hips. The shoulder straps primarily provide balance; load-bearing and distribution is a secondary function. The load-shift straps adjust the balance/weight distribution ratiobetween the hip belt and shoulder straps, whether it's to give the hips a rest or compensate for balance on extreme [or even moderate] uphill or downhill terrain. Once you get the hang of using them, they can be a great tool to extend a pack's comfort [or lack thereof].

Your pack looks like an Osprey, perhaps an Osprey Tempest? (Womens' version of the Osprey Talon.) If so, the problem may be the adjustment of the harness (shoulder straps) for your back length. The harness is attached to the pack via a big bit of Velcro in the hydration pocket next to your back. The harness can be moved up and down using this, in your case down towards the bottom of the pocket.

To adjust it, loosen the load lifter straps and slide your hand between the two sheets of Velcro to separate them, then move the harness down an inch or two making sure it is centred. The Velcro is very grippy so it can be a challenge.

To adjust the pask, loosen all the straps and put the pack on with some load in it. Starting with the hip belt, tighten it so the load sits comfortably on your hip bones,. Then tighten the shoulder straps, followed by the sternum strap and finally pull the load lifters so you take the slack out of them but not too much.

The maker should have better instructions than these. For Osprey, search "Size and Fit" for a video on adjusting packs. There will also be an Owners Manual for your model. If you bought it from a shop, they should also be able to guide you on adjusting it.

Osprey Talon/Tempest are incredibly comfortable packs so well worth the effort of getting adjustment right.

Because I have two "moderately large" herniated discs in L4 & 5 I had to buy my Osprey EXOS 58 one size larger so the shoulder straps could not put much weight downward on my shoulders. They went pretty much straight back to my pack.This way I would not feel lower back pain at the end of a long day.

Had I been uninjured the shoulder straps would "wrap" over my shoulders (as you see in Patman's photo) taking maybe 20% to 25% of the weight, depending on how I used the hip belt.

Hey YN! It looks like your pack fits you but you haven't adjusted the suspension in the correct order. I think what you've done is tighten the load lifters before you had your shoulder straps tightened enough. You should also have your pack loaded with a reasonable amount of evenly distributed weight (the weight you'll most likely be carrying) before you adjust it. Heavier items closer to your back and near the center.

First, loosen all of the straps completely. Then tighten the waist belt, getting the belt up on your hips and ideally the center of the belt is about over your belly button.

Then tighten the shoulder straps so that they wrap around the top of your shoulders, staying in contact with them.

Next pull the load lifter straps so that the pack pulls up snug against your body and hopefully that doesn't create a large gap above your shoulders. A small space is OK. This might take a bit of aggressive tugging.

As a final touch and what I like to do is slightly loosen the shoulder straps so that you don't quite feel so pinned down.

This adjustment is a good starting place. After you hike with the pack for awhile, you can fine tune it to your liking.

All in all, the pack looks like it is the right size for you. After you have your pack adjusted the load lifters should run back from the top of your shoulders at a 45 degree or less angle. Smaller volume packs and less weight are OK to have a more shallow rise or nearly level.