I like to get feedback before I Buy! and not to waste any money and I what to use my REI 20% off coupon and my REI dividends on 4-2018 and I like to lighting my Load on my Touring Bicycle/Backpacking. and I have looked at the Theremarest base camp 72x20x2 is 2lbs 2oz packed 5x21.

I have been using the Thermarest Trail Pro Sleeping pad 72x20x2 with the Big Agnes Encampment 15° F degrees 2012/Gunn Creek 30° F degrees Sleeping bag 2013 and I have buy a new Big Agnes Encampment 15° F degrees Sleeping bag 2018 by 12-2018 it says that I have to use a rectangle sleeping pad. and I am starting to like the Big Agnes Q-Core SLX Sleeping Pad in 72x20x3.5 for My Bicycle Touring Trips in the USA. and I don't like sleeping on the hard cold ground. and I am trying to lighting my load for Bicycle Touring. and I have looked at the Theremarest base camp 72x20x2 is 2lbs 2oz packed 5x21. 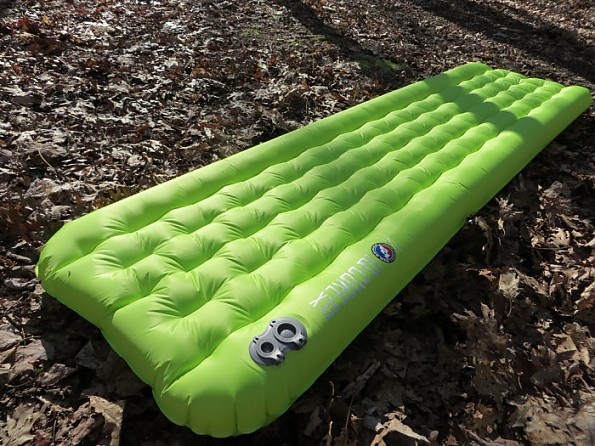 I use Exped currently, but I had one of the original gray Q Cores - rated to 15F and four inches of cushy goodness. On the heavy side. It now leaks, after loaning it to someone, and so it's sitting on the shelf waiting for me to be patient enough to find and patch the hole. I'll use it for car camping after it's fixed.

All of these inflatables will eventually develop leaks. Not a single one of them claiming to be durable will resist leaks forever. I have an Exped Synmat I used every month, several nights per month, for 4-5 years -- it has patches all over it, from developing leaks and being sent off to the mfr for patching, and it's that comfortable that I keep patching it. Finally got a new Exped to replace it after a patch sprung a leak. Happily the Exped Hyperlite is 13 oz, not the 28 oz of the Synmat medium 25" I was using before.

I had one of the original NeoAirs, which lasted nearly nine years before leaking. Never did anything risky, like use it for a floaty toy in the lakes. You choose the one that you find comfortable and use it.

Another factor for some is noise, but for me that's not even considered. People complained about noise with NeoAirs, but the noisiest pad I've ever heard was a Big Agnes insulated air core - everyone in camp was laughing every time that lady rolled over. Any of them will be noisy given the right circumstance. They are all made of the same basic materials.

Big Agnes sleeping bags are too cold for me. The pad being in the bottom sleeve holds it open too widely. I'd rather be tucked in and reduce the air space inside that my body is supposed to be warming.