Any suggestions for a park model tent that won’t break the bank as it will only be used a few times a year? Basically, something that is family friendly and the girls don’t have to crawl into? Knockoff brands are OK also.

Here is one that I really like, but would prefer something with a room on both ends with the screen house in the middle type. 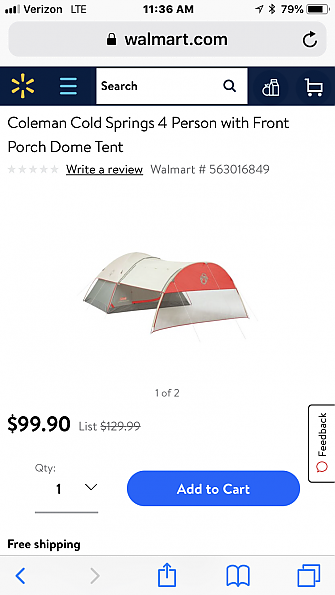 I’m also looking to get a camper pretty soon. Both of these will help when I have to go on the shopping trips. At least I can stay in the parks and not get stuck in a hotel room all the time. 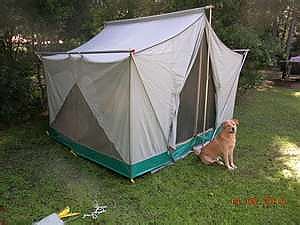 These kind of tents come in single or multiple room floor plans.

Coleman is still a pretty good bet for pure car camping. If you want something you could carry a bit look at Kelty. For a little more money they have lighter options which are still sturdy shelters in a storm.

For longer trips a wall tent with a wood stove and a cot.

Ed you‘ve had that one for a while. Definitely like the head room but would like an attached screen house if possible with it. For sitting around in the evenings. Doubles as a shade and a shelter for all the nats down here.

Lone you are right. Kelty has one ( shiro 6)that I liked pretty good but it’s around $420 and since its only gonna be used a couple of times a year would rather go with the Coleman brand unless I find something better. I’ll use the savings on more hiking gear.

pine yup probably should get a 2 burner stove the 3 burner I have is about worn out and  as to a bed recon I’m gonna have to get one of those blow up air mattress .

I’ve been using hiking gear but always have to yell at the kids and it’s all a little to cramped for group outings. So might as well invest a little although the camper is going to cost. But that’s ok I want it also, plus it will come in handy on hiking trips when I’m done and want to stay longer.

Cabela's has some decent larger tents for car camping and hunting.

If you have kids, get them their own tent or teach them to set up your backpacking tent. No reason everyone has to sleep in the same tent.

No kids just 20 or maybe 30 nephews and nieces now plus older aunts and uncles who aren’t going to get out any othe way. And this stuff will be good for me also. Mainly on my annual Lake Canasaga trips and such , a little more comfort when I’m not hiking although I don’t think it gets any better than my hammock.

Already planning a camping trip for my niece her husband and 3 kids ages 7,5 and 2 just  figured car camping better for them right now. Plus uncle charlie has a lot of trouble with his legs so he can only do short hikes. Parks are definitely better for him. Best way to get them all out other than shopping trips to Gatlinburg . Start them out easy.

John, you may be better to search the discount websites like campsaver.com, backcountry.com, moosejaw, STP, etc. I was in the market for a car camping tent last year and found the Eureka Midori 6 on a crazy sale. It's much bigger than I need but that isn't a real concern for car camping, and it provides a lot of flexibility with all that space. I was willing to get something on par with a Coleman, but the Midori has aluminum poles rather than fiberglass and its lighter, in addition to it being cheaper on the sale I found. I'm not saying go out and get a Midori, just that you can benefit from keeping an open mind about what to get, especially when it comes to something like a car camping tent where the specs aren't as important as with backpacking equip.

jr was doing just that when I came across this 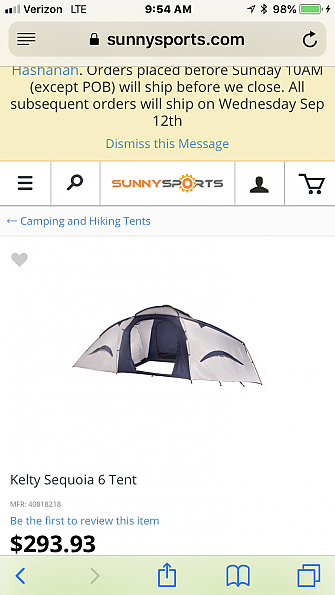 it was called a Kelty Shiro on another site and listed for $420 there.

anyway this is the style I’m leaning towards just would like  a  screen house in the middle .  ill give yours a once over

If you are OK with used gear...try geartrade.com. I sold an Rei Kingdom tent that slept 6 on there years ago for a fair price.

John, I'm not specifically recommending the Midori to you, it doesn't have the design features you want. Just pointing out that by trolling the online discount stores I found a bargain that fit my needs and in fact is better quality than I would have settled for, so an extra-great bargain. If the Midori had not been on sale I would have bought something else, and I would be making the same post today about trolling for bargains.

understood I do that any way and checking yours out may  help Incase I over look something.

Hey guys by the way if any of y’all ever pass thru Columbia S.C. Check out the Backpacker store ( not affiliated with the magazine) the always have good deals on hiking boots on the clearance tabl. stopped by there last weekend while out looking at campers and got a brand new pair of Salomon comet 3D Gtx for $119. And many other great deals on boots there.

I don't know were you live but it's my experience that you will find your best deal by far on Craigslist.  Many Many good  deals on Denver, Portland and Seattle Craigslist.  There is often good stuff in other cities but I find that the volume of items on those three cities gives me so very much to choose from.

Here's a good in Portland:

There's lots and lots of tents that fit your requirements on in all three cities.

I have had very good luck with Coleman over the years. When we had small kids we used a two-room 10'x12' tent that gave us privacy and security. The floor was heavy-duty and never got holes. Nothing ever broke on the tent and we used the heck out of it. I only gave it away because it was too big to set up by myself. I have a newer, smaller Coleman and it's built just as well. I doubt I'll need another car camping tent, ever. You can look at the Coleman cabin tents here: https://goo.gl/83JQMB . You will only ever need one. It's great you're getting out! Happy Camping. Cheers, Bob.

So far we are happy with it for 2 people who like their comfort and use extra large cots to sleep on. No way this tent could sleep 6 people tho; 2 adults and 4 small children maybe.

The Grandhut is definitely a fair weather tent tho, so keep the weather in mind when choosing and if in doubt go the next size up. We use a separate dome shelter for daytime living, the tent is simply for sleeping in

Here check this out as well.

car camping means weight isn't a consideration; you want something that won't fall apart, that keeps you dry, and that's comfortable to sleep in and move around in .

difference, other than that the tipi is huge (they have smaller models) - better fabric, more stable in wind, durability.

Andrew does the 24 man tepee come with a Wild West show?

thanks for the info guys!

I love that the 24 man tipi accommodates two stove jacks and not just one. That stove they sell looks a lot bigger than the Seek Outside stoves too. I may need to find 20 stout men and women to help me carry it, but would make a Winter palace :) 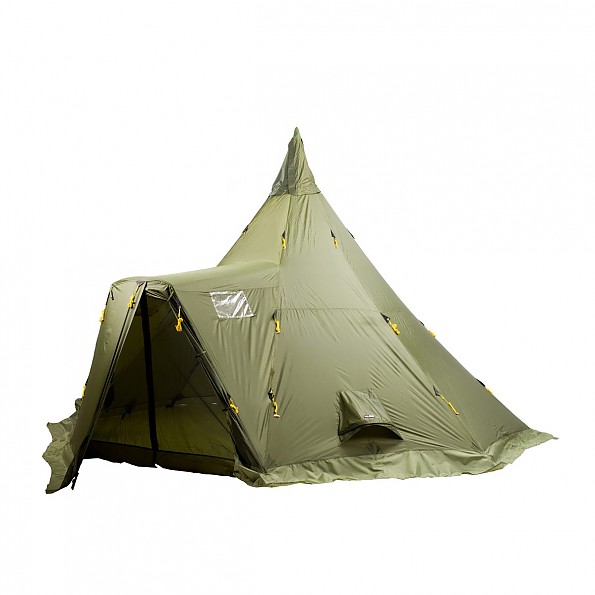 That one's for 8-10 people so maybe bigger than it looks. Note the side and top vents, the latter buttoned down. Many have a fitting for a stove. Not what you're looking in form or price, but maybe of interest in this thread. Scandis know how to do winter.

And lest we forget: 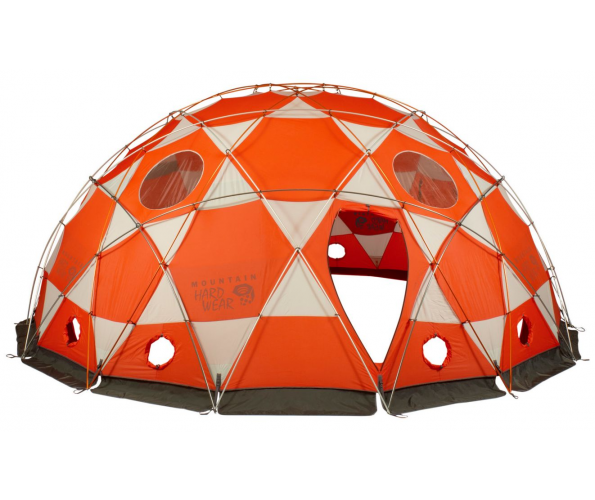 We have this kind of tunnel tent for car camping with my whole family. There's no such thing as too much space in the tent, IMO, and this tent has gobs of it. It's a bit of a bear to put up, but it's also basically standing height inside and with two rooms allows you to designate separate gear/hang out areas from sleeping areas. The better to stay organized and sane when camping with little kids. :)

I have one of those Varanger Camp lavvus and it is actually smaller than it looks due to the wind shedding catenary cut. In high wind [ that is wind approaching / exceeding 100 kph] it is wonderfully stable and strong but I wish I had saved the extra for the bigger 12 person model. I snow camp with a pulk train so hauling gear isn't a big problem

I would not recommend a single wall tent for truck camping unless it is canvas.

I never liked sleeping with a large bunch of a people in a single tent.  It is handy to have a large communal tent for bad weather and as a gathering spot.  Then people can retire to their own tents they already have for sleeping.  Untill you try it, no one can imagine what it is like to be in a tent with a wood stove in it.

That's what we used to do...had three smaller tents facing each other with a tarp strung over the communal area in the middle and one direction there was no tent so you could enter or exit our little village. Really enjoyed the nights talking from one tent to another