What's the most durable pack you've owned? What set it apart from the others? Was there a specific event that flipped the lightswitch for you, or did you slowly come to realize the lights were on?

Without a second's hesitation, a large ALICE pack I bought in maybe 1987 and didn’t get rid of until maybe 3 or 4 years ago. That thing got tossed out of trucks, was strapped on top of a tracked rocket launcher and busted through low tree limbs, blasted by rocket exhaust during live fires, dragged through mud, sand, and rocks, and was used as an improvised rest for firing rifles & machine guns. I’ve had over 100lb in it quite a few times, and while it really squeaked with those loads nothing ever broke. The frame was the weakest link, the rivets would loosen up and always elongated their holes so it was rare to be able to repair them more than once. I probably went through 3 or 4 frames in the time I had it.

That being said, I wouldn’t wish that heavy, uncomfortable, one-size-fits-nobody monstrosity on my worst enemy.

The HMG Summit pack. No question, not even close. Any pack that has a woven dyneema face fabric already has the abrasion resistance better than a 1600 ballistics cordura, then you add the tear strength of the cuben finer backing and its indestructible. The only thing I'd like to see in person is a Cilo w/nw. I'm assuming they get the same fabric from the distributor but I've never seen one in person so I can't be sure. Its the only thing that I could imagine being comparable (unless maybe weight isn't a consideration because some of the frost river packs are bomber).

No complaints about any of the packs I’ve owned so far. 9 in all I think still have 5 of them. 3 Gregpry , 1 northface and 1 grandTeton knock off brand, and it’s the only one I’ve had to do any repair on so far.( one of the cinch straps had to be resow)

Id have to say the Gregory at around 8 yers for the oldest. But I’m pretty careful with them and dont throw them around but I do use them and don’t baby them. My Northface is 9 or 10yrs old and other than a little stretch in the mesh for the water pouch doing just as well.

all good here so far

I am really surprised to be saying this since I thought going lighter with my pack would have to mean giving up some durability. After several years of solid use, the Robic fabric in my Ula Ohm has outperformed my old Gregory Z55 and other go to packs. The real moment I knew the 210 Robic fabric was tough was at the end of one of my off trail scrambles. An hour or so of literally crawling through rhododendron thickets followed by a patch of briers resulted in mutliple direct hits to the pack from decent sized branches including stabs directly into both sides, and many scrapes. When I finally got out of the bad decision route, I took off the pack with fear of damage. I couldn't see any evidence of the beatings it took besides some dirt and scuff marks that came out upon cleaning. That's the moment I knew I had a sturdy and dependable pack. I didn't fair so well with some bleeding and a bruise or two. To date, I still don't have any damage to the Ohm, while my old Gregory began to show signs of wear and tear under the same usage.

All that said, I haven't put my Ohm's Robic fabric through a torture test like Jake did to his HMG...of course he had some free samples of fabric but still a commendable demo of the toughness of that type of woven Dyneema fabric.

I found the biggest threat to packs is the sun's ultraviolet rays, which seem to have the same brittling affect on most fabrics.  It doesn't help that over half my trips are venues above 10K' where the sun is even more fierce.  I have replaced the bag on my main hauler external frame pack three times over a 40+ year span, due to sun aging.  The last bag has lasted much longer than the first two, now that I routinely cover it with a plastic trash bag when not on trail.  Mind you this pack does not see much thicket contact or rock abrasion.

When it comes to mountaineering applications, I find no pack stands up well to the abuse of being dragged forcibly over rocks, albeit we have not used tactical pack designs due to weight considerations.  My friends and I have used all sorts of packs with different fabric specs; they all degrade after a few seasons when hauling heavy loads and getting subjected to abusive impacts with sharp talus, or scuffing along course grain minerals such as the monzogranite formations of Joshua Tree.

The one bag that has stood up better than my other bags is a cheap 15-20L Outdoor Products day hike bag, which also see service as a three season summit bag.  The upper portion of this 30 year old bag is ravaged and held together by numerous repairs, but the bottom has a leather scuff boot that has enabled this bag to survive when others have long since worn holes through their bottoms.

For me this is my first real backpack: the Kelty Trekker 3900. I never hauled the weights that Phil Smith describes with his ALICE but I did my share of ridiculous loads with that thing. Hard to imagine what could break it. It's ungainliness is like built-in protection for bush-whacking off-trail attempts. You just can't make the attempt while wearing it.

I still have it but don't use it at all anymore. It's leaning against the wall at home with other gear stored inside of it now.

I don't have many pictures of it since it predates writing trip reports for me: 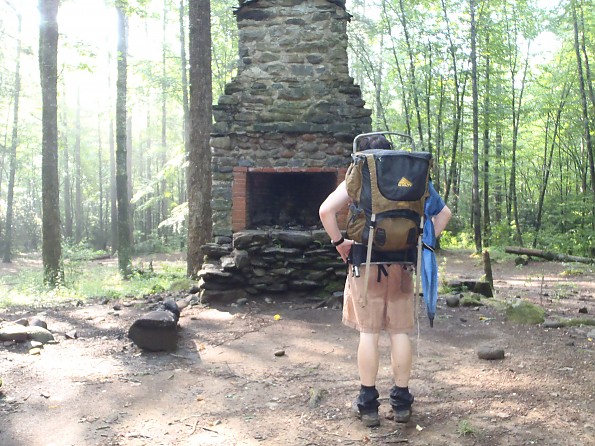 lol, I forgot about this one with me hiking in a wife-beater with map in teeth for a selfie, but it shows the old chewed up frame: 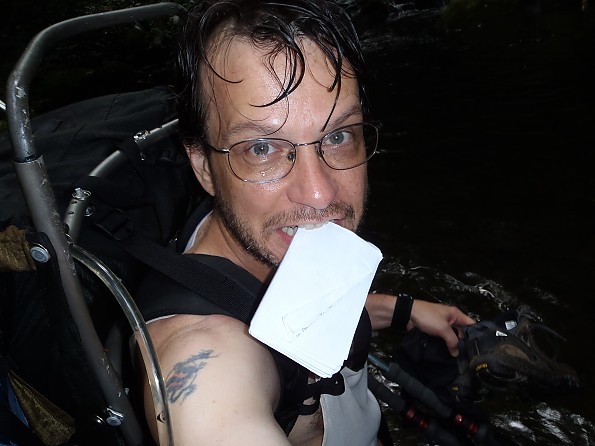 ah found another, and apparently was sporting a big umbrella too: 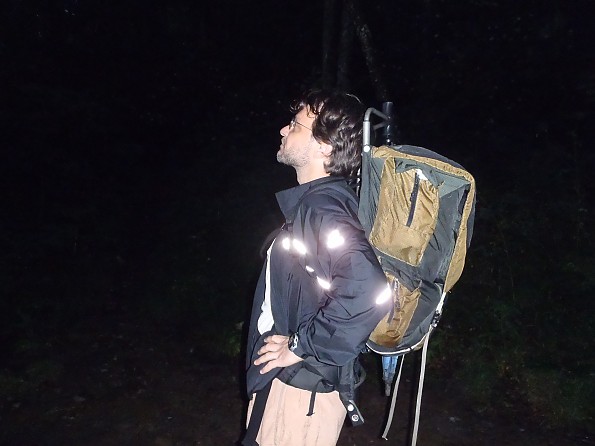 the backpack that I used the most and that absorbed the most abuse was North Face Snow Leopard II - a large internal frame backpack.  only reason I stopped using it was that the coating on the inside surface of the pack material eventually (after nearly 20 years) delaminated and made a mess of the interior.

The replacement to that backpack hasn't been used as often, so it's hard to compare, but it's a Mystery Ranch G6000 and is about 10 years old.  Very well-made, built to endure. Heavy at nearly 8 pounds.  I replaced the shoulder harness not due to wear and tear, but because it became hard to get the odor of many trips out of the material.

Its a toss up between an old McKinnley early 1980’s that I used while working for the forest service for 4 yrs - 100% cordura . It fell out of a helicopter through the trees and it barely left a mark. I just recently tossed it since the cordura had become very stiff.

The review I wrote saids it all

All of them. My Dad's Trapper Nelson from 1945 is still serviceable.

As for me, it was an early 90s Coleman 'Peak 1' external-frame. The one with the fiber-reinforced poly frame that showed someone bending the frame right in half on the hangtag. So of course I had to try doing that, sort-of like how when the ads for Ugly-sticks show dudes bending them tip to tail and you have to try that.

The Peak 1 was all Cordura, so it didn't mind when I used it as a seat, or threw it in the back of a truck. I made a few repairs to it over the years, but I parted with it feeling that I hadn't put it through its paces.

My 1962 Kelty frame would still be in use today for really heavy or awkward loads if it hadn't been stolen some years ago, but it worked fine or bout fifteen years.

I am going out on a project in a couple of weeks and I will be using a Lowe internal frame dating from about 1975 -100% cordura - those are darn tough packs.

It’s a fishing rod made by Shakespeare

has the best warranty 7years

Aw man...i was ready to buy a new ugly hiking stick! I guess the comment about being able to bend them should have clued me in...

One of the first. Graphite fishing rods.

I remember my brother showing the bending tip to tail when it went snap .

They weren’t cheap back then.

Eberlestock Just one..  It goes from 2300-4600 ci and this is what I use Elk hunting and I would hate to guess how much I have had in it but it is way up there I’m 6’2 and 250lbs and when I have went to pick it up I had someone else help lift it on to me.  It is by no means a light weight pack at 7 1/2 lbs.  There have been times I have lifted it up and could not believe a strap did not tear loose as there is not much I can not lift or move as a ExMarine. I use it for all my backpack hunts and It’s going to Alaska next fall on a DIY Caribou trip.

Not cheap or light but tough.