Gear for Jungles: my recent experience and suggestions

Just six months ago, I was not even a novice: I was a studio-based computer scientist who had yet to consider the outdoors!

However, I have recently returned to London from an expedition into the uncharted rain forests of Palawan. I crossed many rivers, climbed steep mountains, evaded venomous spiders and snakes, and befriended a nomadic tribal people who shared with me their ancestral secrets.

This was not a tourist trail. I pursued it as part of my postrgaduate fieldwork in anthropology, and I am the only non-tribesman to see some of the places. I lived with them for weeks at a time, over a period of three months.

Trailspace.com helped to make my expedition a success

Before I began, several members of Trailspace.com gave me some very good tips. I would like to return the favour by sharing with you some of my mistakes! :)

Most suggestions were that I buy a regular backpack and use internal drybags. One member suggested the Arc'Teryx Bora and my choice was the 65. This backpack was unbelievably good. Despite being a light-weight studio-based nerd, this pack empowered me to outpace everyone - even the tribes.

Having now seen hundreds of people struggling with many different packs, I am relieved and happy to say that I bought an Arc'Teryx.

The tribal peoples are typically short. They maintain cut passages through thick vines that are not high enough for a westerner to pass easily. I had correctly identified the need for jungle knives and had bought a sword-like 15” machete (known locally as bolos or itak). However, this was infrequently used and I would suggest a wide blade of approximately 10".

In contrast, a hat is very important for protection from overhanging cut vines that can be both heavy and sharp (on account of the manner in which they are cut). I used a locally sold hat made from tough coconut fabric and this reduced the danger from collissions with vines. However, it was unsuitably wide in the brim to combine with a high backpack.

Having seen nothing better, my tentative suggestion is that the Victorian pith helmet is a very wise design when exploring jungles populated by migrating tribes. Shame its out of fashion!

My Samsung GX10 (Pentax K10D) performed with distinction until I lost the battery charger. However, my Canon XM2 frequently failed in the heat with a steaming lens and seizures.

MiniDV tapes are under pressure in hot humid conditions and I took good care of mine. However, many Sony tapes failed and all Panasonic tapes survived. I will never buy Sony again.

It was agreed on Trailspace.com that I should buy American Jungle Boots. However, I did not :(

Flip-flops and sandals are fashionable for tourists, and affordable to local populations. However, these are dangerous in a jungle populated by small but highly venomous snakes, scorpions and spiders. For example, I wore for convenience - a pair of sports flip-flops near to my camp that were bitten by a viper! Having struck the rim of my flip-flops, its mouth was too small to reach my foot and I was very lucky. Furthermore, I am led to believe that most bites are to the heel or ankle of a person who has accidentally stepped on a small snake.

On most occasions, I wore a pair of Clarks’ Gore-Tex hiking shoes with Superfeet insoles. These gave good protection and were light enough to dry out between jungle visits that involve wading through rivers. The deepest river to wade across was approximately 5 feet deep - consequently, breathable or waterproof fabrics are a non-issue.

However, trails were not confined to jungles and the soles of my shoes slipped on wet mountain sides. I would tentatively suggest light-weight climbing boots for this environment. I also suggest storing shoes inside a tent to prevent them from becoming nests for insects.

I wore the same shoes in London before and after the trip, with no discomfort or obvious wear.

Excellent socks are necessary for protection from rubbing fabrics. The most suitable socks are marina wool, too expensive for import and available only in good mountaineering shops. I tried locally sold socks, such as charcoal treated cotton, and these were thrown away after a long treck on account of them going hard and smelly.

Tiny grazes and itching were a problem, particularly at the end of a day in which feet had been hot and wet for prolonged periods. Small grazes are not a problem for someone returning to hotels and medical centres. However, if living in the jungle, amoebas in the water will prevent quick healing and a tiny graze can quickly become infected. I was prescribed anti-bacterial cream and told to avoid all water (even hotel shower water).

I tentatively suggest washing feet in alcohol as a preventative action.

On Trailspace.com, it was suggested that I buy linen clothes. However, I found these only in very light colours and the fabric was impossible to clean. Cotton t-shirt and jeans were not a problem to wear, but they are also difficult to wash in a jungle.

I would tentatively suggest Gore-Tex clothes on account of them being light to carry and relatively easy to clean in river water. I also found a tough jacket to be invaluable for protecting arms from thorny vines and occationally intense sunlight.

I found purifiers to be of little value. Instead, I carried just enough bottled mineral water for my walking, knowing that the tribal people are friendly and would show me their water springs.

The conditions can be tough, and I consequently shared my water supply with tribe members who had been recruited as guides or porters - this was very rare but sometimes necessary. Consequently, carrying several small bottles is more practical than a single large bladder.

That is the Victorian Pith helmet.

According to my laughing lecturers, such photographs were staged to present the British anthropologist in a way that the British public expected. Furthermore, that such helmets would be impractical on account of their size and weight.

However, having done my fieldwork in jungles, I suggest what this guy is wearing is an old-technology version of what we genuinely need.

I want to read more! Excellent stuff and congrats.

Thank you - it was an amazing experience :)

I do not know what else to write on the topic of gear selection. However, in keeping with the forum subject, I have selected for you a photograph of a tribesman with his own backpack! :) 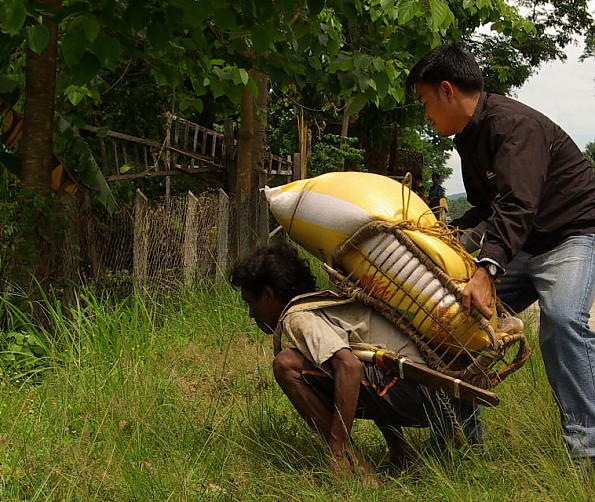 He is wearing clothes because he has come down from the mountains to help me (and my friend, pictured) carry a supply of rice.

I figured I'd toss in my 2 colones.

Here's some of my gear.

All this crap, and more, gets stuffed in a 1995 Kelty internal frame pack.

I own a farm and guide in Costa Rica. I've tried it all. I mean ALL. This is what works for me.

Very nice! I posted something similar in another thread but I'll take this opportunity to start a discussion - if you are willing to entertain it? :)

In the tropical rainforests, the sun sets at 6pm year-round and the dangerous animals are nocturnal. Indigenous people are safe because many people will share one house and 6pm is too early for sleep. Just after sunset is when they begin their loud rituals, which inherently scare away any animals. It also keeps the people entertained for good psychological health.

In all photographs that I have seen of hammocks used in the field, the location is sparse woodland rather than dense rain forest. I am sceptical and the hammock seems a very bad idea for rainforests because its not that easy to find space, it separates a group into individuals, and imposes silence from sunset. This is boring! It is also less safe.

Group tents are problematic because large flat clearings are difficult to make in a rainforest. However - one thing I liked about the group tent is that we could play instruments, card games, and such like, well into the night. This gave us the same protection that indigenous people enjoy.

Westernised locals who frequent the rainforests, claimed that the only thing that works for them is to sleep with an indigenous household. However, given a choice, they selected our tent.

I bought my knives locally, though I would prefer a high technology version - are we allowed to transport large metal weapons on airplanes? The Itak and Bolos machetes that are sold in the Philippines are typically longer, thinner and more curved than a Corneta.

Yeah that's what I had, and I had forgotten what they are called. They really did work :)

My flashlight was flawed because it had a metal construction. In a rainforest, and in your heat-producing sticky hands, there is no chance for the flashlight to cool down. Resistance increases as the batteries warm up, reducing power throughput and dimming the light.

Incidentally, the tribes used bamboo torches. In the ancestral manner, they split the bamboo at one end many times. They may have stuffed grasses inside inside and set fire to it but I'm not sure because I fell asleep :(

In the modern manner, they split a bamboo lengthways and fill it with batteries. The ends are attached to a collection of small torch lights. This improves indoor lighting because they would traditionally relly on fires inside their houses.