I did look around this website but the last post was back in 2003, which all of the cameras are now obsolete. (https://www.trailspace.com/forums/backcountry/topics/25340.html the thread i found).

I am looking for under 100 bucks, preferably a lot lower though! :) I did do a little research but most I found had bad reviews or not very rugged for the weather.

Check out your local Craigslist ads under photo/video or go to www.bhphoto.com and look in their used camera department (its on the upper righthand corner of their home webpage) Also check out Ebay.

I had a Nikon N60 camera for sale for $50 but got no buyers so I sent it to my neice who is a budding photographer.

You can get 35mm camera shots converted to CDs when you have the film developed.

I have an older Kodak digital EasyShare camera, I'm not sure what the model # is. It takes nice pictures and you have just a few settings that you can mess with for different effects over all it is very easy to use and takes nice pictures I think anyway Take a look an my pictures posted here most of them were taken with that camera. As far as the batteries go I use 2400 & 2500 mah Kodak & energizer Brand and they last a surprisingly long time. on my Kodak 2400mah batts I took over 200 pictures in one set of fully charged batts. I don't think thats to bad depending on how long your going to be on your trip a set or 2 of extra batts would go farther than a whole lot of film. As far as the camera goes its older and I picked it up cheap so if it get ruined somehow i'm not out a lot. And being digital it doesn't matter how many pictures you take you only take the ones you like to the photo-mat (walmart) to get professional quality prints But thats my opinion.

I ran into a similar issue, i was concerned about bringing my main camera and associated lenses worth a couple thousand dollars on my hikes. Not only the bulk bothered me but I really didn't want to take the risk of damaging the camera unless there was something specific i wanted to get some nice shots of. Instead I picked up a "hardened" camera that is waterproof (20ft), fall resistant (5ft), cold resistant (14f), and can do wide angle and 720p video. Of course it doesn't excel in all areas but it allows me to take some ok pictures and do some short video without much concern about damaging the camera and it's a pretty small camera so it doesn't ad any bulk. In my case I picked up the Olympus Stylus Tough for about $280 but I know I saw some previous generation ones from that and other manufactures for around $150+ on ebay and such. The only real negative is the battery is internal but I have a small solar charger which works in a pinch. Might be an option for you.

Thank you all for your advice!

From what Josh has said I found a small battery charger. http://www.siliconsolar.com/flexible-solar-battery-charger-sollite2aa-p-138.html and a waterproof case for my camera.

now i just cant be an idiot and drop it from a cliff! :)

now i just cant be an idiot and drop it from a cliff! :)

I'm sure you wont but just encase use the wrist strap and don't fall your self.

As mentioned above, Olympus (and Panasonic) make "tough" cameras that can take a drop and are waterproof (to 10 feet or so).

On your worry about batteries, Canon has several models of P&S that are pretty durable that take AA batteries. But I have pretty rarely found battery life to be a problem. We had several tiny Minoltas that had a way too small battery, but the Nikon and Canon P&S that we have don't have a real problem for multiweek trips. For the DSLRs, I do take a Brunton foldup solar panel (folds to about 9x11 in its bag) that will recharge my Nikon DSLR batteries in less than 2 hours on a reasonably sunny day. We shared this panel among 5 of us for our DSLRs in Antarctica (I also had the Canon P&S with spare AA batteries on that trip).

I have a waterproof hard case for my mini DV camcorder. It will survive a drop in a creek. My Canon XTi got dunked when I slipped on a mossy rock last spring in Oak Creek and it took four days in my oven of a tent to dry out. It works fine again but when the images show up on the rear screen they are upside down.

I actually picked up a Casio Exilim EX-G1 and so far have had pretty good results with it. I use it quite a bit and the picture is pretty good. So far it's withstood a caving trip, 2 kayaking trips, and quite a few camping trips.

Olympus even does a decent underwater photo. 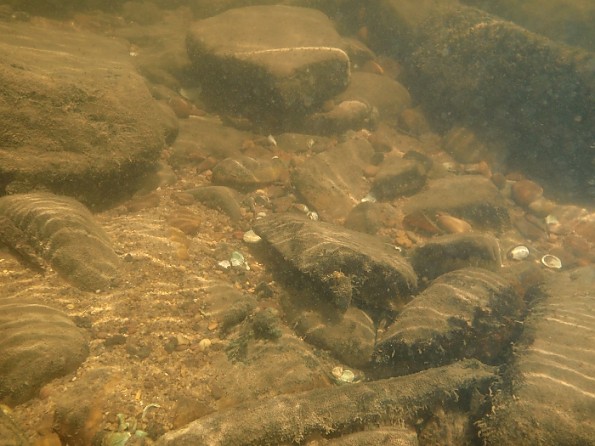 Get a couple of disposables. They have better lenses than a cheap film camera and you don't have to worry about them.

I totally agree with Kitty123. Pick up some disposable waterproof cameras. I have an Olympus Stylus but am not always the most graceful of creatures and have found that a good quality disposable works quite well. Most disposables can be recycled too so this is an added bonus!