Has anyone tried the new shoe with the toes? I am curious, I have heard lots of rave about them, but never actually talked to anyone who has worn them. Seems like it should be called the Five Toe Classic?

And how did they design them, lytex rubber over someones foot? 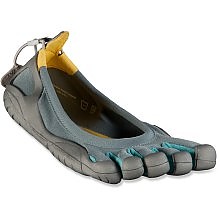 It somewhat depends on your feet I think, my little to hugs pretty close to the inner toe I think mostly from the years of soccer with my boots pushing my toes together a bit, so when i put my feet in here its uncomfortable with how they spread my toes but I have other buddies that wear them everyday and love them to death. I have worn them to see if they felt better after a while and it is really just like having barefeet but you are protected from little rocks and scrapes. good calf workout on runs im told as well. (even after some time my feet felt a tad uncomfortable, not unwearable but wouldnt be my first choice for my feet in particular)

I tried on a older model pair with the nylon upper, my high instep would'nt fit. Plus the largest they make is a EUR 47. I might try and see if I can find a pair like I have pictured above. Might work without the instep problem. Wonder why they size then in EUR instead of USA?

.. Wonder why they size then in EUR instead of USA?

Because they are made in Europe, and because they were designed by the younger Bramani (Vitelli Bramani the elder was the designer of the the original Vibram sole - Vitelli Bramani - as a replacement for the old nailed soles that were on climbing boots in common use until the 1940s and into the 1950s.If you look on the web, there are a number of sites that give the equivalence among American, British, European, German, and Italian sizes (the German and Italian are not used anymore, since the introduction of the European standard).

If you look at the original pattern of the Vibram soles, you will see that the edge lugs are a rubber version of the tricouni edge nails and the center lugs mimic the hobnails used in the central part of the soles. When I started climbing, a lot of the older mountaineers were still referring to them as "Bramani soles".

The younger Bramani, who heads the company these days, is an avid yachtsman. He realized that the sticky rubber that is used in climbing shoes these days would work well on the slippery tops of sailboats, especially if siped. And since many sailors like going barefoot, he designed the 5-finger as a cover for the foot with a bit better grip for running around on the deck of a racing sailboat.

When they brought them out, some of us who climb a lot figured they might provide good friction for climbing. I picked up a pair at the Outdoor Retailer Show several years ago and have used them on friction climbs. They work well for that, though they do not provide any comfort on jam cracks, and as someone mentioned above, on sharp rough rocks. But there are runners who like running barefoot and find that the 5-fingers provide enough protection for trail running.

They work very well for kayaking and canoeing and for stream crossings, even on moss-covered rocks, in my experience. I will probably get a pair of the ones that are more designed for rock climbing eventually.

FYI, I just read this week an industry news article about how many, many fake-Vibram websites are popping up all over the internet, especially for the barefoot shoes. Vibram has to keep getting them shut down, but more pop up (often overseas).

So, if you decide to buy a pair, try and buy them from an outdoor store or from a reputable online retailer and avoid the knock-offs.

I own a pair of the KSO's and hike in them, mountain bike in them, and wear them as much as I can, even casually. I will say that mine are fairly new, bought them last week. Expect a 2-3 week adjustment period. I'm not sure that everyone has the same problem, but vibram does state this as well. Overall I like them, and they are rather comfortable. You often forget that they are on.

I have the KSO Treks on order. I have been waiting for months to get the size and color I want. Everyone is out of stock. After reading about them people are saying to order from a place with a good return policy as you may have to return them to get a proper fit.

They carry all the models of the Five Toe at a local store here in Flagstaff. I will probably wait till Fall to get some for my Paria and Parunuweap hikes in southwest Utah in October.

I have a genetic anomaly called "web toe" -- my middle and index toes have a bit of skin connecting them at the base. If you have this, you might try a pair of the Injinji toe socks before you invest in the Vibram Five Fingers. The toe socks caused extreme discomfort and I had to stop using them, which told me there'll be no Five Fingers in my future.

So your'e one of those missing links between fish and man!

I want a pair of Treks sooooo bad. I have heal pain that is intense, which is the problem with conventional foot-gear. You walk on your heals with them while going barefoot or using the vibrams you land on the ball of your feet.

Anyone use them for backpacking?

I have a friend in Wyoming trying out a pair in the Teton Wilderness, when she tells me how they have been I will let you know.

i'm intrigued by them and have seen a few people hiking with them lately. can't shake the feeling that they make people look a little like hobbits.

i'm intrigued by them and have seen a few people hiking with them lately. can't shake the feeling that they make people look a little like hobbits.

I own a pair and to date have used them on two backpacking weekends, I use them mountain biking, and general use. Like I said above, it takes some time to get used them and I find that my feet ache, which Vibram even warns you of. All in all, I like them, they are easy to maintain, and are super light.

I actually read in a magazine not too long ago, that they were actually developed as a minimalist foot protection for the "barefoot runner-craze". Unfortunately I can't remeber the magazine, I read it while waiting to have 2 cavities filled at the dentist, so after that........

I got my KSO treks. Nice quality for the dollar. Very comfortable. It's no problem to walk around on the hot pavement or in the desert sand when its over 110 F. I am hesitant to get them near pool water as I fear the chlorine may discolor the shoes. They are very light on the feet as you would expect.

My kids say I have gorilla feet. I will have no problem going hiking in them when it cools off. I have not put my old shoes on after getting the KSO treks.

With the comments about them making your feet ache, I'm curious what the allure is. Is it the light weight? or the feeling of being nearly barefoot? or because they're trendy? :)

I have been wanting them for a while. When I was a young man I was working at the Oakland airport. My foot was run over by a 747 ladder we were pushing up to a plane. It seemed to get better but after exercising for a while I can feel my toes are not 100%. The five finger shoes let my toes work and stretch a bit more and I expect this will allow them to get stronger.

Check this story out.
http://nymag.com/health/features/46213/

I put on regular shoes after a couple of weeks of wearing the five fingers. I noticed a real difference in the way shoes work on your feet. I like the five fingers a lot better.

D&G in the Smokys said:

I actually read in a magazine not too long ago, that they were actually developed as a minimalist foot protection for the "barefoot runner-craze". Unfortunately I can't remeber the magazine, I read it while waiting to have 2 cavities filled at the dentist, so after that........

No, not for barefoot running. As I posted up higher, Bramani (son of the Bramani who developed Vibram soles - Vitelli Bramani, hence the ViBram name) is an avid yachtsman (sailing type), and developed them for being able to stick better to the wet decks of his racing sailboats. If you look closely at the bottoms of the soles, you will see that they are siped for better traction on wet surfaces. The next step was use in kayaks, then on sailboards and surfboards, then later for walking and running "barefoot". Somewhere in there, rock climbers discovered they offer great friction for friction slabs (though they are painful in jam cracks).