My wife and I just got home from a trip through Bryce Canyon, Zion, and Death Valley National Parks.  The scenery was stunning, and the weather was all over the map!  :) 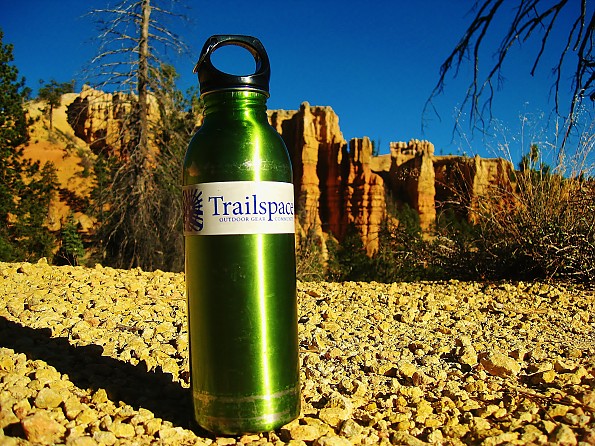 Is that Bryce or Red Canyon on the west side along the highway in from US89? I hiked Red Canyon last fall in 2013 in a canyon called Cave Creek.

The shot was taken in Bryce Canyon, just East of North Campground.  It was only about 125 yards from our tent.  It  was pretty cold, too, with the first night's temps dropping down to the low 20's.  Big Agnes kept my wife and I toasty, though, just like she always does!  :)

So the campground is on the rim? I bet it was cold as the rim is about 8000 feet. Guess you were there in the fall or spring for those temps?

I spent April to February living down in Orderville Utah last year and winter while working at the Thunderbird Lodge at the junction of us89 and st9 12 miles east of Zion NP. I was at 4800 feet and it got cold there as well at night.

The campground is near the rim on the North side of the park at about 7,200 ft.  That's just a guess, as I can't properly recall.  Yes, it was cold!  The temp dipped down into the high-teens on the first night, then up into the mid-20's the second.  We were using our shiny new Big Agnes Dream Island 15-degree doublewide bag for the first time in such conditions, and it did not disappoint.

We were in Bryce last week, on October 27th and 28th, and in Zion on the 29th.  The weather in Zion was much warmer, but the wind at night was pretty fierce.

I'm jealous that you got to live and work in such a beautiful place!  :)  We are already planning a return trip to Zion to Hike The Narrows and Angel's Landing.

I just managed to find that the campground is actually at 8K feet, not 7,200 as I thought.  It's a nice place to camp, and our last night there was the last night for the loop that we stayed in due to the freezing cold temps. There is running water, and the ranger told me that they were concerned about the piped freezing and bursting.  He also told me that it was common for that campground to drop down to minus 25-F in January!  Yikes!!

I have been living in and working at many beautiful places over the last 37 years. Zion, Grand Canyon, Glacier,Denali, Yosemite, Jackson Hole, Gila Wilderness, Lake Placid,Tucson, Flagstaff,Anchorage, just to name a few. I have made my life adventure traveling,

Tomorrow I am going on a 5 day hike into the Catalina Mountains near here in Tucson AZ, my winter home till April when I return to Wyoming for another summer in the NW mountains working to support another winter in the southwest.

Hopefully I will be able to continue my lifestyle for many years to come, I will be 59 in January.

My hat's off to you for being able to live your life that way.  It's not always easy, but the rewards are off the charts.

Not always easy? When like all of us I was told in high school that I could be and do anything in my life that I wanted, but I just had to work hard to get it. I had already decided when I was 12 that if money ruled the world and those who had the most of it did the best, that I would make money the least of my needs.

I started working as a youngster picking up the old apples off the ground around the apple orchards near y boyhood home in upstate NY. We, my neighborhood friends and I, got $3.00 each per 20 bushel crate we filled, which didn't take long after the apple shakers removed the majority of them.

Anyway I learned early that I could make a good amount of money in a very short amount of time and have all the things I wanted or felt I needed. Most of my money went to the Ben Franklin's Five & Dime, for toys,baseball cards,chewing gum,pea shooters,etc.

By the time I was 13 I was mowing lawns, trimming hedges and tree's, walking dogs, and working in peoples gardens weeding and such.

I continued this into high school, college and even in my first years working in Alaska,Wyoming and here in Arizona. I still do landscaping part time when I need extra money. But now I mainly work all summer in Jackson WY where wages are much higher than the normal minimum wage in other places and in a month I can save 3 times as much as anywhere else.

I started my travel adventure career when I was 21 in 1977. I had been out of the US Navy for one year in June and decided to hitchhike back to NY to visit old friends I had not seen since I was 16 when my parents sold the family farm and moved to Arkansas.

So around mid June 1977 I left home, my dad took me out on his way to work that first morning to the edge of town and I started on my way to NY. My first ride was with a man who was my dads friend and had agreed with him to give me a ride to the next town northeast. After that I got many ridEs and soon in 3 days I was in my hometown of Sodus NY. I looked around various places I remembered and went to our old house in the country and explained to the new owners that I had grown up in this house, my father had built back in the 1940's and noticed that most of our old garden was overgrown but much of the larger plants like my mothers Current bushes were still there still producing berries even tho the grasses had grown into them. The new owners were surprised to see them as they had never ventured into the garden area.

Anyway I found only one of my many old friends as like me most of them had moved away to college and university, the military or had married and moved someplace else to raise their family's and work their jobs.

So I then decided to hitch down to Washington DC where my brother then lived and worked in Arlington VA. I spent a week at his apartment though he was away on a business trip. I went and saw much of Washington everyday. He came back and we visited briefly when I left to hitchhike to Denver Colorado to visit my mothers sister and my uncle.

Then I hitched to Seattle WA where I got another job for 3 weeks as a laborer working on a construction site and living with the guy who gave me my last ride to Seattle and got me the job. He had a small farm in Maple Valley and we rode to work together with another friend of his.

After that I went down to Oregon and California going to Mt Rainier, Lake of the Woods, Crater Lake and then Goose Lake on the northern California border and worked for a retired school principal who lived in the woods for weeks on end cutting down giant old snag ponderosa pines, chopped them up into firewood and filled a 5th wheel trailer and hauled them back to his house and sold it in the winter.

Then I went to Yosemite NP and spent three weeks backpacking. From there I hitched to Los Angeles then back to Mojave where I stood on the western edge of the desert for 3 days and finally caught a ride back east. After about a week and a dozen rides I was back at my parents home in Hope AR. I had been on the road for 3 months covering 8000 miles with my thumb.

After working for a month at a lumber yard I decided to hitch back to Seattle and go live in Anchorage AK. I went there to homestead as Alaska still had it. But after 2 1/4 years of working winters in Anchorage and hiking summers in Denali Park but had still not gotten any land I left in late December 1979 and flew back to Seattle and took a bus back to Arkansas to spend the Christmas and New Year holiday with my parents. Then in the month of January 1980 I took Greyhound out to Yosemite and stayed from mid January to late May winter camping.

I had saved $4000 in Alaska for a nest egg for the land I had hoped to get, so now I lived on this for a year and a half hitchhiking and traveling around the US, mostly in the west and traveled through Jackson Hole Wy a couple times till the second one when I stopped and worked there for the summer of 1981.

In the 18 months I traveled I discovered I could live on just food money and foot loose and fancy free to do anything I wanted. But I was tired of hitchhiking and that summer met a couple from Germany who were bicycle touring around the USA and I thought I could try that and rode to Arkansas that fall.

That got me started on what has become my main mode of transportation around the country, giving up hitchhiking. And the money I could make even back then in Jackson (JH) gave me enough to live on 9 months a year to travel, bike and backpack all over. The following summer in 1982 I worked 3 months and then biked to NY and AR then after working the winter biked to Tucson and back to JH. That was 7000 miles and really hooked me line and sinker to bicycle touring and freedom of the open road!

Since then I have bike toured about 4000 miles a year, backpacked all over the west mostly in NM,CA,AZ,UT and WY.

Now a days I work 3 months every summer in JH and have every year since 1982, except a summer in Denali AK in 2006 which afterwards I biked 1000 miles around the state of AK. I also have worked a couple summers in and around Zion NP and also a spring in Yosemite in 2002.

Then in fall I either have come to Tucson to hike and be free all winter or gone to the Grand canyon every other winter from 1983-2003 or lived in Flagstaff backpacking all winter and down in Sedona.

Right now I am in my favorite winter home of Tucson where winter here is like summer in JH and spend 4-5 days a week backpacking in the mountains here.

But to me the effort has all been worth it these last 37 1/2 years, doing my thing. To me life is great! I can be in the best places in the country and I am home no matter where I am.

The next 4 nights I am going backpacking and will be back on Monday. Its cooling off now in Tucson getting into the high 60s.

Cool pic, Bigger Al! Thanks for sharing it.

It's nice that you and your wife are able to explore and enjoy such beautiful places together. Bryce is super cool. I bet it would be amazing to see in winter.

More Topics
This forum: Older: Trailspace in the Catalina Mountains near Tucson Newer: TS in Keystone River Cave
All forums: Older: Yet another trip up Bear Canyon, but this one from its mouth to headwaters Newer: Spreading Outdoor Ethics and Lasting Impact: Dean Ronzoni of Leave No Trace