Happy Birthday to the NPS!!! Celebrating the day on the trail with Otto the pup on his third backpacking trip! 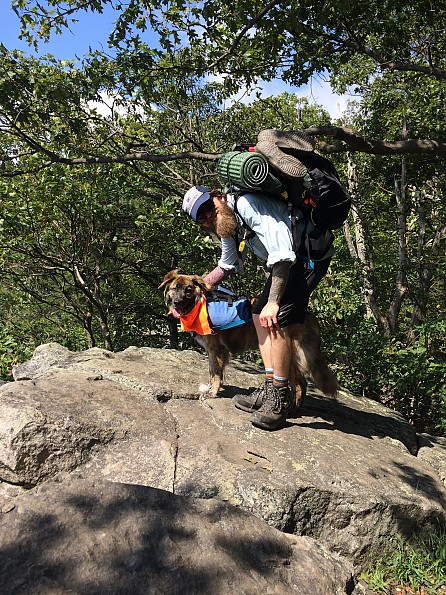 Yellowstone was declared a Park in 1872 and run by the US Army.

PPine is right that there were already parks, 35 of them at the time, but the National Park Service itself was established on August 25, 1916, to protect and manage them.

Sean that's a nice shot...Like your hiking buddy! Which park?

I'll have to credit a new client for taking the snapshot! This was taken on the Appalachian Trail at Annapolis Rock, approximately halfway between Harpers Ferry, and the PA line in Maryland. We had an overnight at a nice little area called the Pogo Memorial campground. The campground was named after a poor young feller that drowned in the Potomac River in 1974. Pogo was 26.

The Potomac claimed a couple of guys this spring; out in high water, without life preservers. It is always so sad to hear about folks challenging the elements...

"The Potomac claimed a couple of guys this spring; out in high water, without life preservers."