I am piecing together a route for a trip this summer, part of which would include going up cataract creek to Amphiteater Lake and then over "Amphitheater Pass/Cataract Pass" which would take me into Upper Basin and then the JMT.  I would then continue on over Mather Pass, etc.  I am curious if anyone have gone over this route and has any stories, experiences or photos to share.

And just where is this place you are talking about. Not sure what the JMT is.

From Dumb Bell Lekes, we dropped  down into the eastern end of Amphiteater Lakes then from the northern small lake just at 11,300' over the eastern pass into the Basin.  The 12,000+' pass is generally uneventful.  Best to check Secor for what they say.  Rather than direct at the pass we went northeastish and then traversed to the east over the pass when we ran out of options going uphill with packs.

Getting up the creek, I think, will be your biggest adventure.  But it looks like that would make a grand loop.  We have pictures but all on Ektachrome slides someplace.

We didn't have any snow problems late summer.

Instead of leaving the trail at Deer Meadow, you could make even a more exciting adventure by going up Cartridge Creek from just past Grouse Meadow (where Palisade Creek comes in). It is an abandoned trail, however.

There is some information on the trail and even some maps of it - in the NP archives.  This was before the Internet, so suspect it is on line by now.

Have not done your XC route myself, but...  I would drop pack where the east and west fork of Cataract Creek meet, and scout the way up the west fork for a route.  You may gain more elevation on this route - about 250' more - but the contours look more gentle.  Trace your way to the bowl  at the head of the west fork, then head due east toward to obvious pass above Amphitheatre Lake.  You should be able to scout the best route down to the lake from this vista.  It appears continuing due east from the vista is the route.  This somewhat less than intuitive final approach should have a shorter amount of less harsh terrain to deal with than taking the east fork.  The two challenges will be reaching the confluence of the east/west forks of Cataract Creek, and getting over Palisade Pass.  At least Peacock testifies the pass is obtainable, but no telling how good the trail is along Cataract Creek; sometimes these side trails are little more than some ducks to mark the way.  On that note, I wouldn't assume the Cataract Creek trail junction with the Palisade Creek trail is marked.  Keep track of your whereabouts so you don't end up branching off too early or missing the turn altogether.

Some good points by Whome. When XC, always take the easy way of scouting ahead without packs.  Also maps are made by the devil himself.  A relatively gentle looking approach  at times have a 15 foot vertical piece that is a route killer.  It is all part of the fun ... much like casting bones.  Those 30 foot contours can hide a passel of devils in the details.  You can sometimes plan on talus in lower stretches with some great scenery on both sides.  Talus is definitely placed there for our sins.  Another name for the ankle bone is the talus bone.  That just can't be a coincidence!

Here is a good link that mentions some of the goings-on in and around the area you are interested in.

It alludes to other details about the area (take a look at upper parts of the link).  If you are going to be spending some time up there, it is always good to start a library of info links. One caution, some of the links don't stay up for many years and die of misuse or neglect.  Best to keep an electronic copy on your machine someplace.  And add to it as your interest and knowledge allows.

When taking on XC passes, a short hank of rope comes in handy at times hauling up or lowering packs over one of those class 3 route goblins you come across.

*edit note* Just found this little tidbit in one of the references above:

"Cataract Creek Pass (11,500+). This pass connects Amphitheater and Dumbbell lakes. The trail along Cataract Creek is said to be the worst section."  Whomeworry has insight nobody understands.

Thanks for the info Speacock and Whomeworry and the links are helpful resources in my library... But I wanted to clarify the route.  Going up Cataract Creek to Amphitheater Lake will present some challenges, but I have read enough trip reports of that route to feel adequately prepared, but what I was really looking for is info on the pass to the east heading into Upper Basin.  Secor (3d edition) refers to this as "Amphitheater Pass" or "Cataract Pass" (not to be confused with "Cataract Creek Pass" which heads into Dumbell Lakes.  Secor refers to the route as a Class 2 and when heading West to East "look for a large dike system shaped like a crab or lobster on the cliff face on the northern side of the talus chute.  One of the claws points to the south".

In describing the route from East to West, from the descent from the pass has you zigzagging down ledges, which whengoing from West to East would be on the ascent.  I have only found one trip report from a clmber you traveled east to west from the JMT to summit Observation Peak and his map of the route is posted below.  That is the route I was looking to follow from Aphitheater Lake to the JMT. 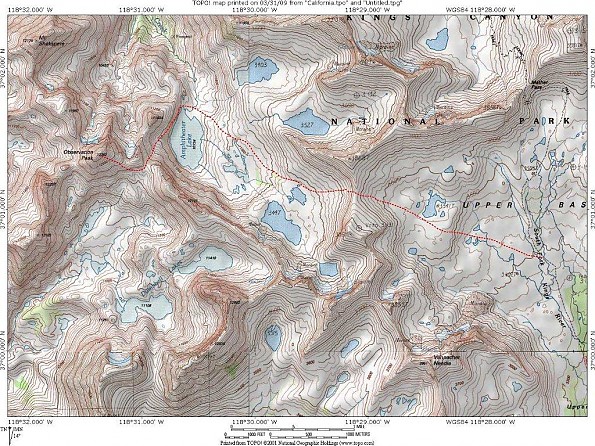 Yep, that is the pass we took from your lakes to the Upper Basin.  As I said we stayed more north (than the line shown on your map) then traversed south-ish to the pass it self. We had entered your lakes from the pass at the SE of the Amphitheater basin from Dumbbell (just east of Lake 11410).  Then walked across to the small lake just below your pass, then up hill going more north than your line shows and across to the pass.

En route, we had checked out the pass to the Upper Basin that is directly east of the Dumbbell lakes (and above a small lake) and decided the down hill side was more than our tired bods could take that day.

We had earlier thought about the pass out of Dumbbell Lakes that your map shows going to Observation, but wanted to maintain the altitude we already had. It had been a long day already and we were tired.

Thanks for the info speacock...

So my next question, which probably should have been part of my first question relates to the Glacier Creek "drainage" and the prospects of navigating down that canyon to Dear Meadow and Palisades Creek.  That section is not mention in Secor or other books I have and all trip reports reports either continue on over Cirque Pass to Palisades Lakes or come down the drainage from Barrett Lakes.  I did read a report of someone who hiked "up" Glacier Creek but that was it.

Any thoughts? and then of course crossing Palisades Creek in early August, any experience with that?

Thanks again for all your info!!

Go for it.  Then report it in Summitpost.com

From Dusy Basin, I've done Knapsack, Potluck and return via Thuderbolt passes.  I've been in the drainage of Granite Creek, but have no productive  rememberance of it.  We had looked at the lower pass to the east as an escape then back up to Dusy from La Conte Canyon. We just didn't have the time or the food.

If you get as far as Palisade Creek, I don't think you will have any problem getting across.   In June maybe, but not by August if there is not a heavy snow year.

The problem with a creek like Glacier is that you may be turned back because of water falls or steep parts.  Going up you can at least see them coming. Going down you are pretty much committed to a couple of days out of your way if you have to retreat. Then there is all that green stuff at the bottom.

I think the main reason there is no accounts of tripping along Glacier Creek is the motives of most folks bushwhacking in the general vicinity center on hiking a circuit route.  Glacier Lake basin stymies the would-be trekker’s options in that regard.  The headwalls along that section of the Palisades are vertical on the east side of the crest above the basin, blocking the notion of a trans crest route.  If one is traveling in a general north/south direction, parallel to the Palisades crest line, Potluck Pass and the un-named pass south of Glacier Lake are the obvious route choices. And if one was looking to travel west (away) from the Sierra crest from this basin, they most likely would use the aforementioned un-named pass and drop down to the Palisade Lakes for this purpose.

All conjecture aside, Glacier Creek may be obtainable. The steeps leading out of the basin are about the same gradient on the map as those followed by the creek draining BarrettLakes.  If there is any difference between these two drainages, perhaps the contours adjacent to Glacier Creek holds the clue.  I noticed the slopes along Glacier Creek where it plunges down to Palisade Creek are more scalloped, with the steeper portions encroaching more closely upon Glacier Creek than the BarrettLakes drainage creek.  This may be a telltale of significant, large, bare rock face features, too large to navigate.  Similar terrain might also feature an inclined slope of large, loose, boulders, versus a slope of more negotiable, smaller sized, talus and scree.  The map also shows more green area along the Glacier Creek drainage; perhaps this whole area is an inclined soggy seepage, making for wet and sloppy footing on this incline.  One thing that appears to be certain is the “flats” where Glacier Creek meets Palisades Creek are a swampy meadow, as indicated by the multithreaded channel of Glacier Creek as it makes its final approach to Palisades Creek.

I must say this area is easier to travel during corn snow season of late spring, on skis, than in summer.  You probably already know if you are considering traversing the Palisades Crestline near Glacier Lakes you will need some technical gear, if for no other reason than to safely negotiate the glaciers on the east side of the crest.  Do check out Summitpost.  I recall if containing quite a few accounts of trips around this area.  Take some of these posts with a grain of salt, however, as the glaciers have been receding, changing the route conditions.  Furthermore personally I attempted at least one route described, only to find a so-called class 4.x route had a 5.x section, and we did not bring a rope.

I was up there last summer, in August, approaching from the east. We were camping in Upper Basin.  I didn't descend down into the Amphitheater Lake basin but I did sit at the pass for a while eating lunch.

The east side of the pass is easy, a lot of loose boulders but nothing difficult. From where I sat, I couldn't identify the path down the west side into the basin. Looks like there are some ledges to negotiate or to circumnavigate.

I would like to return and spend some time in that basin. It looked lovely.