So this June me and 2 other friends are planning on camping up in Yosemite for the first time!! We're super stoked but worried we may not get a camp spot :O Since we're young people with little money, Camp 4 would be the best option for us but we're wondering if there are any tips in getting a spot for sure???

we're planning on getting there on a monday/tuesday  hoping it won't be as crowded as a weekend. any advice would be wonderful

If it is crowed go thru the campground and look for a site with one tent (or a large site with space for your tents) and ask the owner if you can share the site with him/her. I have done this many times in national parks. I offer to pay half the camping fee. I travel all the time from September to May and never follow a strong itinerary so I never know where and when I am going to be anywhere. Following my method when in a NP has worked for me 36 years now!

I also do this for backcountry permits and go to the BCO as a standby (like on a airline flight) I go to the BCO early before they open and wait in line, they ask me for my permit and when I don't have one they give me a standby number (there is usually others doing the same thing which is why I get there early) Then if someone who made a reservation for a permit doesn't show they start calling the standby numbers and if mine comes up that day I get a permit, if not I am closer to the front of the standby line the next day (if I want to wait).

This sometimes works at campgrounds. I have not been to Yosemite since 2001 so I am not sure. But Camp 4/Sunnyside is the largest camground in the Yosemite Valley. Otherwise if you are driving you may have to stay outside the park south of El Portel?

Otherwise contact the park and ask their rangers about this?

GOOD LUCK! Yosemite is a very nice Nat Park, one of my favorites.

Yosemite in the summer in the Valley is one big traffic jam.  It becomes an urban park.  Camping is like being at a concert or a rodeo.  You can day hike and find the splendor of the Park.  Just realize that the campgrounds are zoo-like.  Some people like to camp outside the Park.

The only way to get a site in Camp 4 (which is first come first serve) is to get there pre-dawn and wait at the check-in booth. As Gary says, you might find a campsite with space available to share (read the regs on the board at the office).

Actually Camp 4 is not the largest campground in the park. But most campgrounds are filled with RVs and the sites cannot be shared. Do not try sleeping in your car - the rangers patrol at night and will issue you a citation. But if you are going into the back country, you can get a permit at the Backcountry Office (near Camp Curry), which will let you stay at the back country walk-in campsite the night before you head out, plus the night you return.

Consider staying in Tuolumne Meadows. Everyone wants to stay in the Valley. But Tuolumne is well worth a long stay. There are a number of campgrounds along the Tioga Road, plus campgrounds on the Glacier Point Road and south part of the park (Wawona area).

I tried Gary Palmer's method in Camp 4 two years ago using the same logic. I had plans to camp on top of Yosemite Falls, but due to my husband temporarily ( for 4.5 hours) losing our vehicle in the park, we were not able to make it up there in time, so we decided to make friends in Camp 4 and try to stay there. As soon as we got our camp set up and ready for dinner, a really sweet ranger found out about us and had to throw us out. She said that we could stay at the Backpacker's Camp since we did have wilderness permits. It is not the easiest place to find in the dark, but I am sure if you are familiar with the park that you can find it. It is located behind the Ahwahnee. A very nice employee of the Ahwahnee (who happened to look just like Lurch) took us through a field with a flashlight and pointed us in the right direction. Anyway, moral of the story: don't bank on staying anywhere in the park without a permit, but if you have a wilderness permit, you can at least stay at the Backpacker's Campground if you want to stay in the valley. I am actually going back to Yosemite June 15-21st!

The only way to get a site in Camp 4 (which is first come first serve) is to get there pre-dawn and wait at the check-in booth. As Gary says, you might find a campsite with space available to share (read the regs on the board at the office).

Yes, what The OGBO said. Camping permits at Camp 4 are PER-PERSON, not per site! In late July last summer I showed up at a little after 530am and there was a short line ahead of me. Or so I thought. The line (in front of me) got longer and longer (wider?) as I waited. It turned out a very large family had camped out in their cars in the adjacent parking lot. Their plan was to stake out a position in line, then add people from their group to get camping permits. When the ranger arrived, she quickly determined what was going on. She was NOT AMUSED.  When nobody fessed up, she even called the sheriff.  The sheriff came by but dispensed only a lecture, no arrests (much to the chagrine, I suspect, of the ranger, and those of us who really needed a site to stage for trips we were about to embark upon).    Anyway, I'll leave it at that to protect the guilty who may have been there (it wasn't the aforementioned OGBO) and squealed to the sheriff on the "campsite thieves" :). Fortunately there just so happened to be ~100 free campsites that night (out of several hundred I believe) so we all got spots in spite of the campsite permit thuggery.

I'll admit that I did use the GP method of "show up and ask someone to take you in" approach once. Just once. It was on that same trip, when I had arrived after dark at Tuolomne Meadows Backpackers Camp on day 2 of the ~27 mile trip from Yosemite Valley ... weak from the trip, 5K' elevation gain, and from bodily malfunctions along the way. I was desperate for a place to stay.  Fortunately a couple backpackers on a local trip graciously let me share their site.  Personally I would advise against this approach under "normal" conditions, as it may be "less considerate than one might like", but YEMV (Your Ethics May Vary).

Anyway, here's a shot of the waiting line at Camp 4 @ ~545am on a Monday in late July, pardon the poor image quality of an iPhone 4 in the dark.

Bottom line:  if you want to camp at Camp 4, arrive early, they do not take reservations. 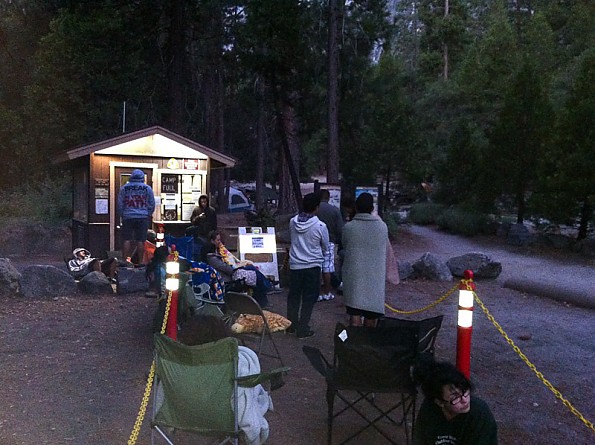 I was actually in Yosmite a few weeks ago, about two weeks before Memorial day and all the normal campgrounds, including Camp 4, were sold out.  I was there for just over a week and they were sold out every day, and this was well before Memorial Day, so I imagine July is even worse..

I did come across that backpackers campground behind the Awhanee.  An easier way to get to it is through the North Pines Campground - it is just across a small bridge over a creek, at the back.

Having said that, there is a campground by the Wawona that is reservation only and it looked like it was only half full.  Driving to Wawona and Galcier Point from the valley, there were many unmarked pulloffs with bear boxes, so these may be less popular and perhaps easier backcountry access points for backcountry camping.  And outside the park is National Forest which has more liberal camping.

Yup, Yosemite is actually a very large park, but the lions share of the usage is in the relatively small area surrounding Yosemite Valley.

I did come across that backpackers campground behind the Awhanee.  An easier way to get to it is through the North Pines Campground - it is just across a small bridge over a creek, at the back.

Or, you could do what I do and go in the Winter. Free backcountry permits, no waiting, no crowds (unless you are in the Valley on a holiday like Presidents' Day weekend). :)

My picture is me on Glacier Point Road, which does not get plowed past the ski field parking lot in Winter.

I am new in California and planning to camp at Yosemite park on upcoming September 1st long weekend. No camp ground available & need advice as to how can I have shared campsite already reserved by some member or tips to secure the unreserved site that weekend.

I have 2 people tent and plan to do it solo unless find the partner to accompany.

@Mian Mahmud: If you're car camping, try the first come first serve sites like Yosemite Creek and Porcupine Flat.  They're some good spots there.  Plus, from Yosemite Creek, you can hike the backside to Yosemite Falls in a day.  Be careful of bears though and lock up your food.  Last time I was there last year and we saw a bear sniffing through Yosemite Creek.  Also, there's no water available at either site, so bring in your water or filter the creek.  There's a water source at White Wolf, along with one of the most amazing breakfast buffets to be had at any National Park.