One more week and I leave Tucson to ride to New Mexico and to northern Arizona and into SW Utah! I designed new panniers for my bike and am about ready to go. 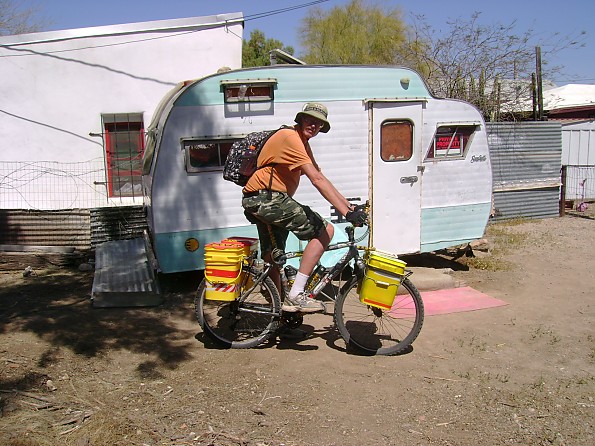 I just redesigned the rear ones from Kitty Litter pail's and repainted the front one's yellow. This year all my gear will stay dry when it rains. The only thing that will will be outside is my sleeping pad.

That trailer behind me has been my home the last 3 months. Just electricity, I get water from the library and shower at the YMCA.

you gotta be expert at livin on the cheep! god luck on your trip. will hope to see some reports.

I found a car ride to Flagstaff which will save me 300 miles of riding. Its a hot spring this year down in southern Arizona and the route I had planned would be dry. I am going to start north from Flagstaff probably Sunday or Monday next. 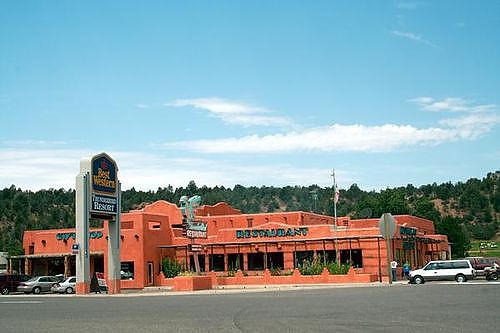 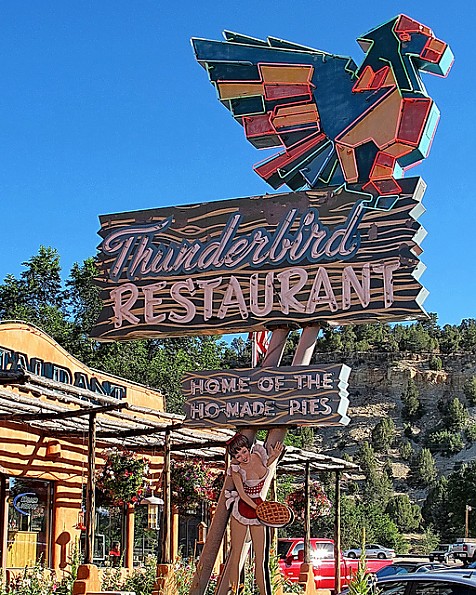 The motel I hope to be working in SW Utah 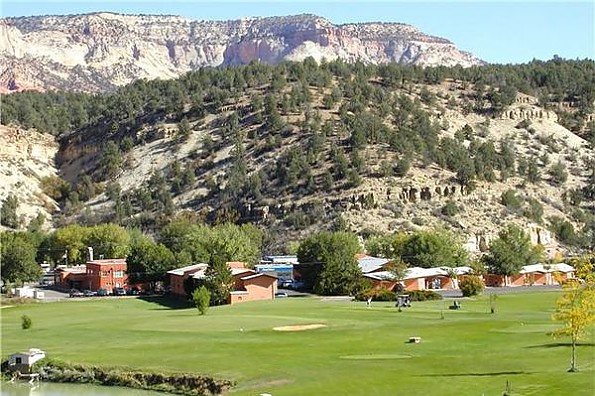 View from the motels backcountry. The White Cliffs on the horizon, part of the Grand Staircase Nat Monument 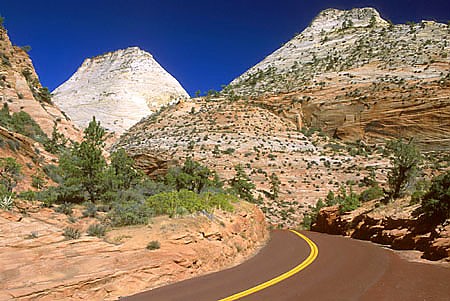 From near the east entrance to Zion Nat Park which is just 12 mile from the motel. Its 100 miles south to the North Rim of the Grand Canyon, 60 miles north to Bryce N.P.

That's an amazing landscape, Gary, it's so unlike the misty, ferny coastal forests and mossy, lichened barrens I walk that it could be a different planet. A bright, dry, sunny planet, with great big views. Wow.

The White Cliffs are 1000 feet higher than the landscape around the Motel. The Last picture near the east entrance is white and pink sandstone soaring about 1200-2000 feet above the road. The red pavement is typical in Zion east from when they used red sandstone mixed into the asphalt 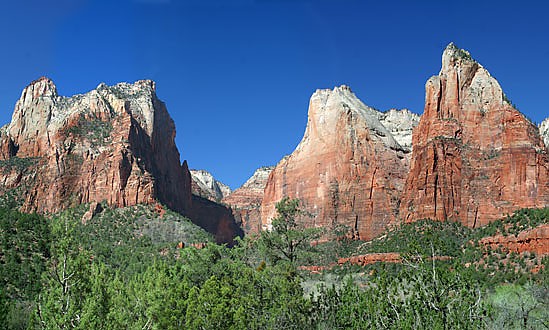 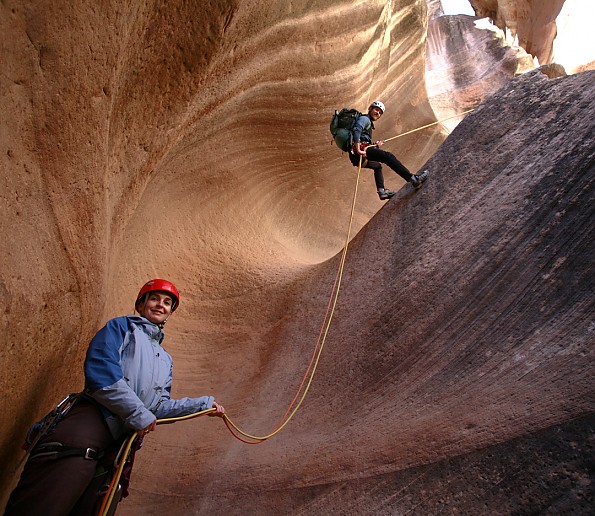 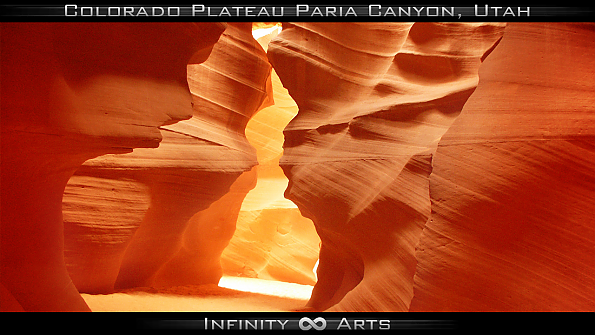 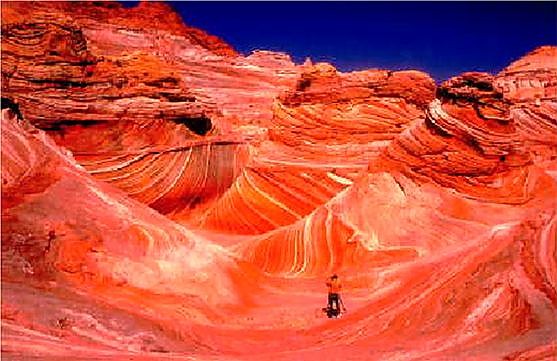 Coyote Buttes, the Wave on the AZ/UT border SE of Mount Carmel. Note person at bottom of picture. 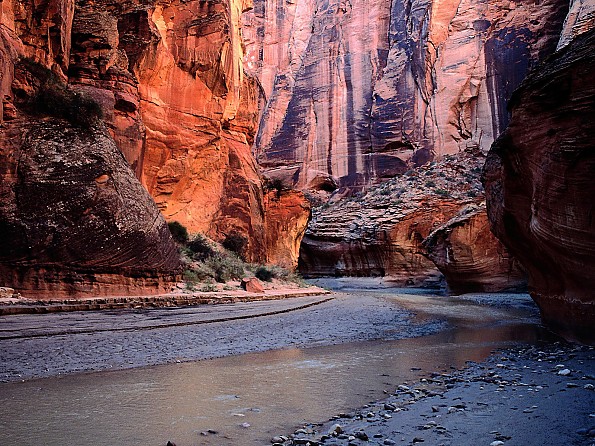 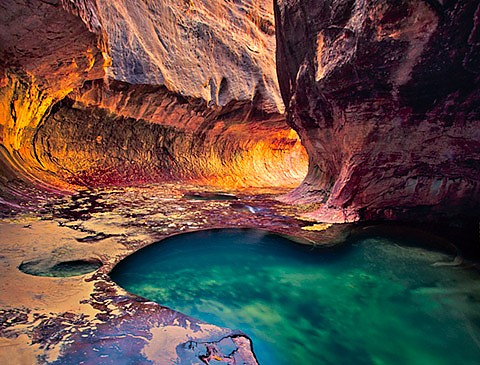 The Subway, a natural sandstone canyon in SW Zion NP 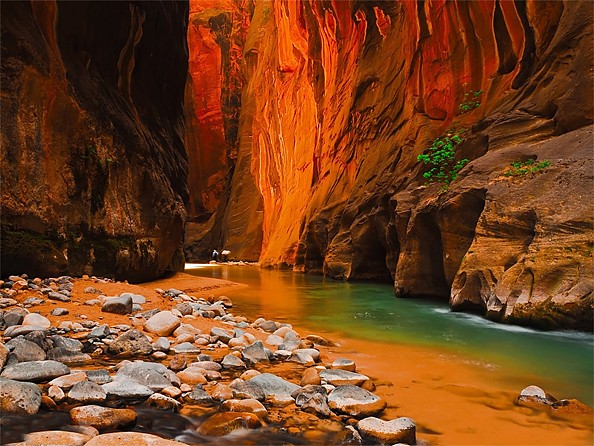 The main Zion narrows north of the canyon lodge, these canyon narrows go for scores of miles getting narrower as the canyon goes up stream.

Lower Zion from Canyon Overlook in the SE side of Zion NP.

See? Wow. It's hard to believe Mother Nature made that, it looks like the CGI background for a sci-fi movie. She has a fine eye for form and colour, doesn't she? Endlessly creative, too.

Maybe I'll see it for myself one of these days. In the meantime, thanks for the teaser!

Hidden somewhere beneath the layers of recent sediments in New Foundland are layers of this sandstone if that part of Earth had  desert like sand dunes at one time in the geologic past!

We got some good rocks around here, for sure. This is where Africa and Europe mashed up with the Americas before continentally drifting off again. Gros Morne isn't a UNESCO world heritage site for its looks alone! There's ancient black pillow lava cliffs in Green Gardens, and 30 foot white sand dunes an hour north at Shallow Bay. In between, fiords with alpine-environment tops. (And in eastern Newfoundland there's Mistaken Point: 560 million year old fossils, crazy-looking creatures, check those out sometime when you're bored!)

I digress. Came here to show you the Tablelands of Gros Morne, which must be the part of Newfoundland that most resembles your turf: 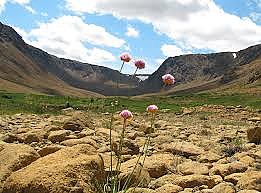 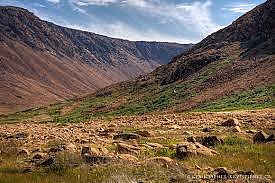 Always imagined cowboys here when I was small. The rock is orange because it's mantle rock, not crust, full of heavy metals. Makes for some weird plant life, and a warm red light.

Yes it can take eons for soils to form after wind blown dusts and sands collect, then simple plants grow and die and evenually soil appears from the rotted old vegetation. Her in the Sonoran Desert mainly only cacti grows wild but many non-native plants have been introduced re-creating the allergy pollen that many moved here to get away from back east and north.

Up where I am going in Utah, its practically the same way. Even non native grass'es in the yards causes hayfever. The sandstone slickrock has very little soil, and what there is gets blown around so plants have a hard time finding root base. Tree's like Juniper, Cedar and Pinon Pine live longer so they can find root water over time. 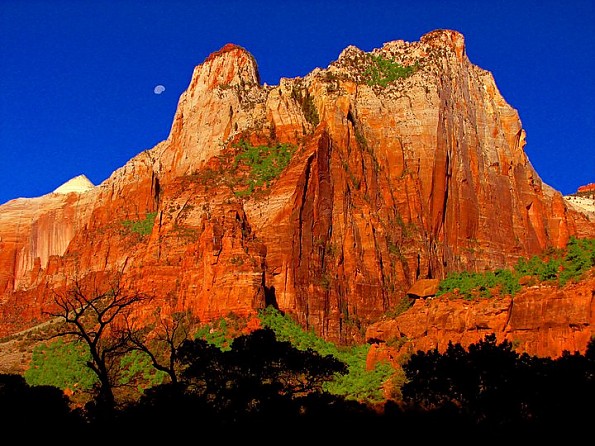 Islandess: Here is some other shot's I took in Zion the last time I worked there in 2007. Moonrise over a sandstone Monolith 3000 feet high. The orange to red color is Iron Oxide from the layers above leaching out and staining the stone below. And sandstone is also made up of the same thing in Rolaids and Tums Calcuim Carbonite, thats what holds it together.

Tomorrow I should finally be on my way to Flagstaff. I had three ride failures, but tomorrows sound good. Soon after a couple days visit to friend and places around there I will be biking to Utah. 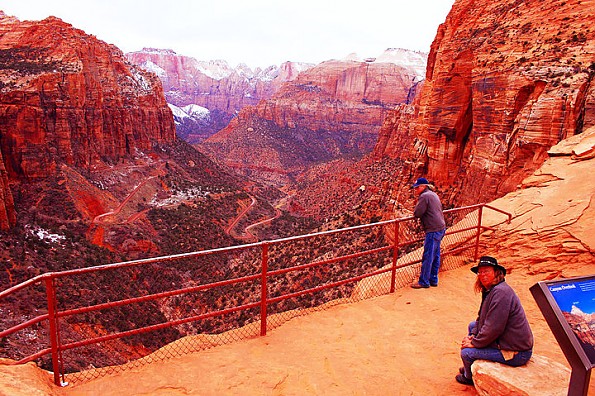 This view of lower Zion canyon is from a overlook on the east side of the Zion Tunnel. Its looking down Pine Creek from a place called the Great Arch Overlook. This was in late February, note the snow on the sandstone. 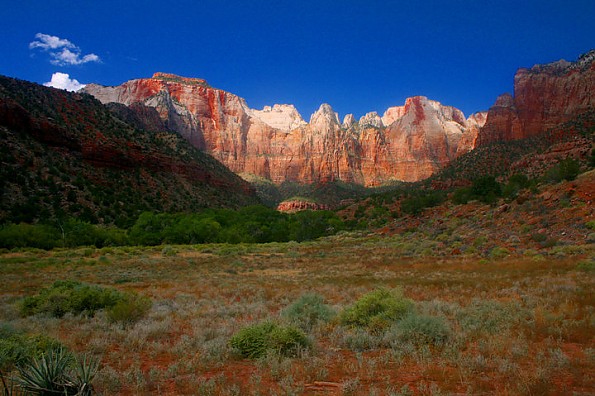 This called the Towers and Temples of the Virgin. The name Virgin is the name of the river that flows through Zion Canyon, named for a early Mormon Pioneer, his last name. 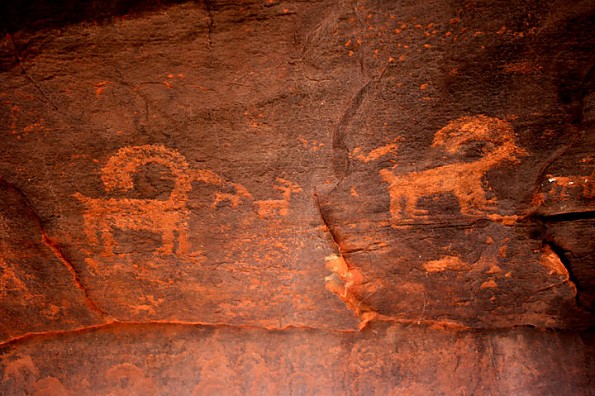 This is a petriglyph of Big Horn Sheep made approx 4000 years ago by early Indian's in the Zion area. 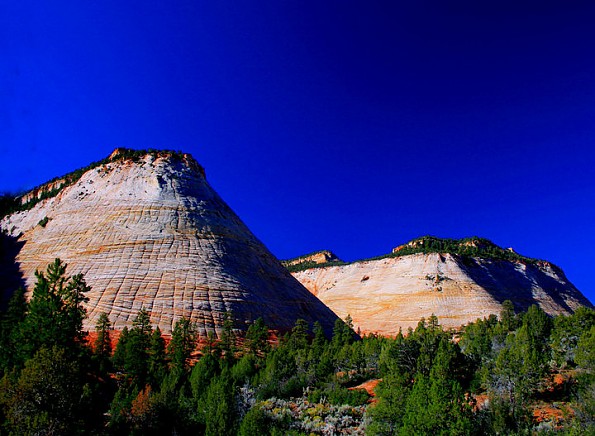 The left dome is called Checkerboard Mesa near the east entrance into Zion NP. 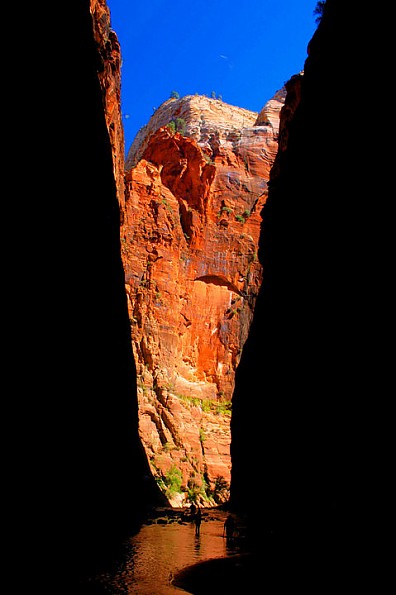 A hiker descends the Zion Narrows along the North Fork of the Virgin River. 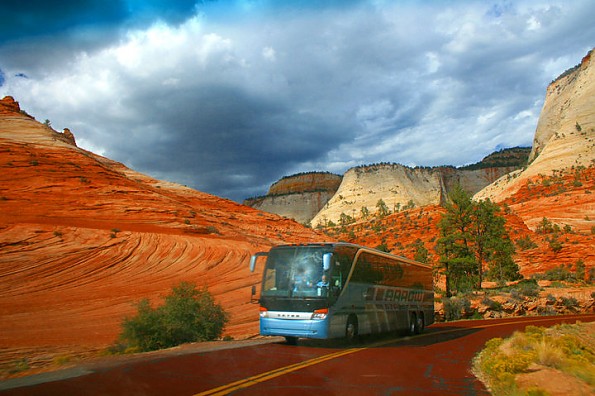 A tour bus drives the red highway (made from red sandstone and tar) in east Zion nat park. 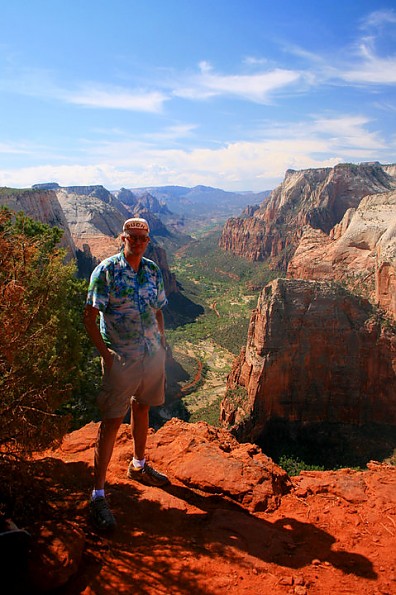 Me on Observation Point with lower Zion canyon behind me. Angels Landing another sandstone formation one can get to the top of is see  to the right of center with the shadowed right side. 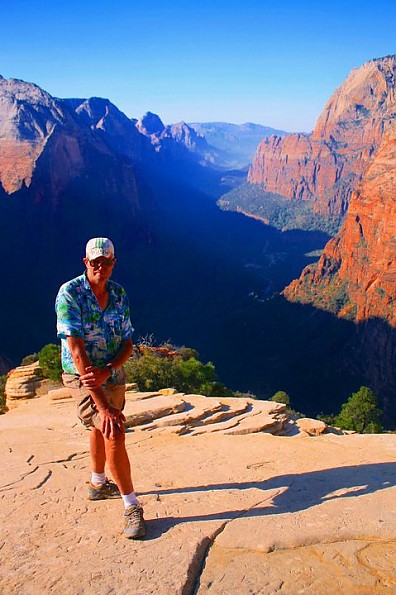 From the top of the before mentioned Angels Landing with lower Zion behind me. Early morning about 9 am. West is on the right. 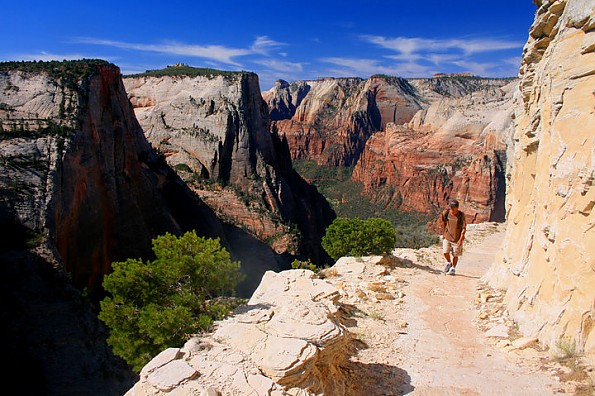 Hiking up the Observation Point trail. Zion canyon behind my friend. 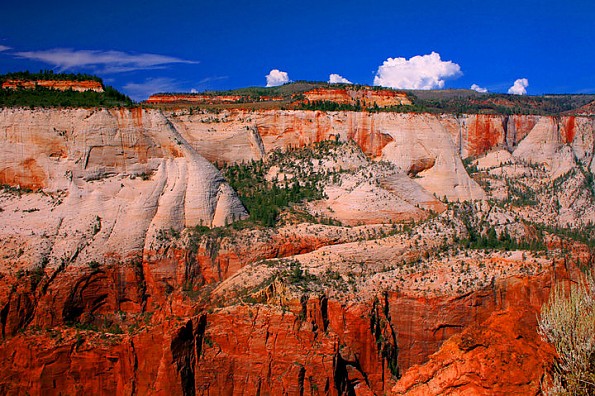 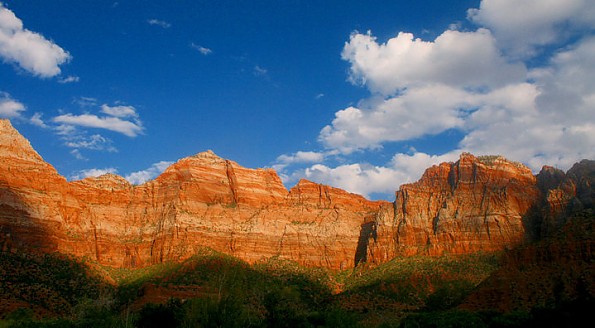 It really must be something, watching the light come and go out there. I bet dawn is quite the show.

I like those petroglyphs too. There's an ancient soapstone quarry not far from me, used for thousands of years, up until about 4000 years ago. You can see some bowls and lamps that got carved out but for whatever reason the final step of popping them off the cliff never happened so they're still there. 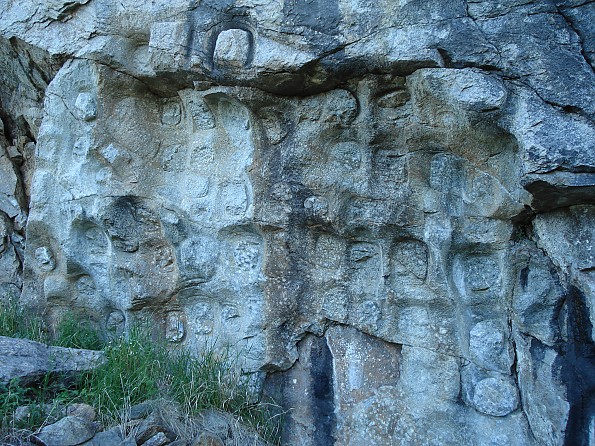 Good luck with your ride, have fun and stay safe!

cool pictures both of you. happy pedalling gary!

I caught a ride from Tucson to Flagstaff to cut out the hot spring desert country. I am in Flagstaff now where it snowed yesterday with snow on the San Francisco Mountains and day temp of 55, which was Tucsons low temp at night! I am staying here a couple days to supply and maybe work a little before heading north on US 89 thru northern Arizona to SW Utah. 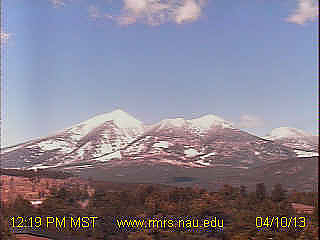 This is what the peaks looks like at the moment with new snow.

good move skipping the hot desert country. looks like it's beautiful where you are. have fun!

I am in Mt Carmel Utah now. I actually hitch-biked here in 3 days. I start back to work here this week cooking. I worked here at the Thunderbird Lodge at Mt Carmel Jct 7 years ago.

Topic: Soon will be on the road again on my way biking to Utah