Slickrock Creek to Fodderstack and Back!

After a few exploratory hikes in the Slickrock/Citico Creek's wildernesses, My wife and I are planning to take on some real millage. We plan on starting at the SlickRock parking lot Friday afternoon and hopefully getting to around the lower falls before night fall. Saturday, wake up then proceed up The SlickRock Creek Trail (42) all the way to wildcat falls for a swim. After swimming make the hard climb up the Big Fat Gap trail (139) (1500 ft in 2 miles....ouch) to the Fodderstack/BMT (95/2) then down to a place Tipi Walter calls "Crowder Horse Camp". This is a nice place I checked out this weekend. Its a great place to camp with large grassy areas and a nice box spring just north of the camp. Sunday we will continue North to Far Gap. Then hang east and down hill on the "Stiff Knee Trail" (106/2) back to SlickRock Creek then get on the "Ike Branch Trial" (45/2) and take it back to the car. This might be biting off more than we can chew but I really want to cover a lot of ground. I will have a full report when I get back. Here is a pic of my route. Enjoy!! 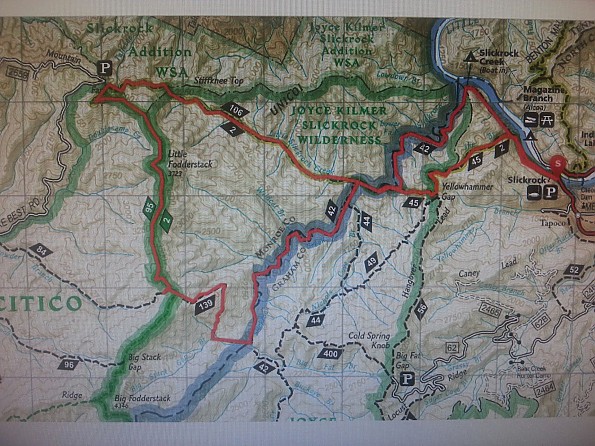 There's a little pull-off campsite on the trail right above Lower Falls if you feel like spending the night.  I've seen campers here with big tarps and guylines running everywhere and I had to duck walk under their tarps to continue hiking.

Your Big Fat Gap trail is really Big Stack Gap 139---I know---it's confusing.  You'll break a sweat going up this trail cuz it's south facing or west facing or whatever and gets hot and it climbs.  Sweet relief comes at the Crowder Horse Camp with the spring.

When you head to Farr Gap I bet that spring right on the trail by the Little Fodderstacks is flowing.  And there's a great creek spring (locals call it Black Snake Creek) not far from Farr Gap on the Stiffknee trail.

Ahhh I got those two mixed up "Big Fat" is on the other side of the valley...oh well. Thanks for for catching that. This past weekend I went Farr Gap to Crowder Horse Camp....the campsite and the spring were AWESOME. I have some pictures I just got back and later on I got a trip report coming. I had a friend from Atlanta that came up for that hike.....he wasn't ready for the climb out of Farr Gap south....the leg before you start up toward the little Fodderstack got him real good. I saw that spring close to Farr Gap right off the trail, thats a good one to take notice of for the future. Hey Tipi I wanted to ask you whats that trial on the other side of the Farr Gap parking lot that heads into the Slick Rock addition area? Also the road to Farr Gap is a long haul. I went in from the Vonore side...Big mistake lol we went in a Car and it was TUFF on it. We went out past Indian Boundary Lake and that wasn't much better.

Yeah, part of that Doublecamp road loop was closed after a recent tornado came thru the area but it's probably open now.  The lower (downstream Citico Creek) loop got closed, but the upper Doublecamp road straight to Farr Gap passes many nice trailheads---Crowder Branch, Rocky Flats and Mill Branch.

The trail going out of Farr Gap is part of a new system of trails called the Tallassee trails and intersects Stiffknee Top and Milligan Creek and someone told me the trail ends up on a "beach" by Calderwood or Tallassee Lake.  Neato.

Check out this link and the map on the link--

Of course if it's anything like the other trails in the area after all this rain, well, good luck.  If the link doesn't highlight, right click it to open.

i also meant to ask tipi about that trail after i did the stiffknee>slickrock>big stack gap>fodderstack loop a few weeks ago....

cold, cold water that will shrink yer tinker bells......but worth it...

and FWIW, there's some nice campsites below the falls and a huge camping area above the falls, across the creek....

and yeah.....the climb up big stack gap branch was not fun.....especially after my legs were made into jello after the dip in the falls.....

the road going up to farr gap from double camp was open a few weeks ago...

its in a little better shape than citico creek road......not as many potholes...

Double Camp really was pretty just rough on the suspension. On my way back I made sure and found all the trail heads you mentioned, plus the Citico Creek trail heads. I plan on doing either the North or South Fork in mid August.

Wow that map is unbelievable. That's a lot of unexplored territory. Thanks for the Link

You all REALLY make me want to camp at the WildCat falls....and I still may.....I just thought it would be easier to wake up and have 80% downhill back to the car. Either way it's going to be a Great Hike!!I might have to wait till next year to get to those new trails.

You all REALLY make me want to camp at the WildCat falls....and I still may.....

i plan on being back on the north fork of citico creek sometime in august to check out what is across the man made log bridge......

thats the one i stayed at...

i saw the one (below the falls) that was closer to the trail, and when looking hard, could see another clearing and decided to see what that offered....

it offered everything i needed---a place to put my tent, a firering, water, and some firewood...

the thing it did offer me that i really didnt need was the wasp sting i got when collecting firewood....

Double Camp really was pretty just rough on the suspension.

i've been doing those roads a bunch this summer in my hyundai sonata.....

Several years ago I did a winter trip and hiked from Warden's Field (low water bridge by the North Fork/South Fork trailheads) down the Citico Creek road and turned up Doublecamp road and hiked the whole way to Farr Gap and down the Stiffknee.  This is what Doublecamp Road looked like a little past the Crowder Branch jct.

wow who needs a trail when you can walk up that....walking that road would be really cool in the winter..... Nice pic

I'm still going back and forth over wildcat falls or Crowder camp for Saturday night....im guessing it's going to be the falls ")

Topic: Slickrock Creek to Fodderstack and Back!