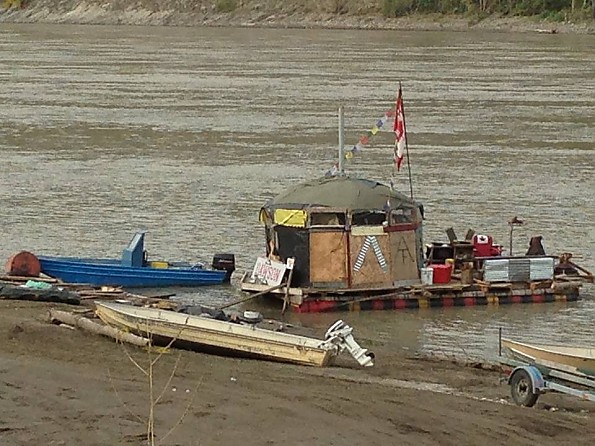 A couple friends of mine have been living near the headwaters of the Yukon River for two months building the raft above. They are planning to set off down the river on September 9th and go down as far as they can till winters sets in. 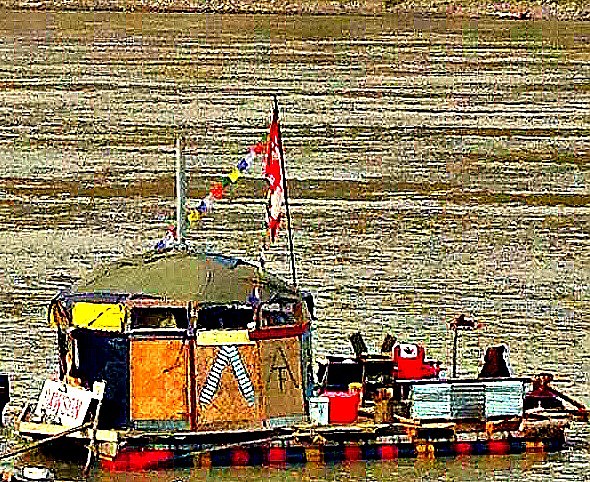 The shelter looks very much like a hogan. Are they from Arizona?

On second look I see prayer flags. It is a yer. Anyone been to Mongolia?

The cabin is made from scrap wood and a old satellite dish for a roof. It was (the whole raft) built for next to nothing, from scrap everything from the Dawson junk yard.

It is a ger not a yer. Very cool and old design. Old ways are the best ways.

A satellite dish for a roof! Why have I never heard of this? Obviously I am hanging out with the wrong people.

I am wondering, how fast is the Yukon River and when does it usually freeze? How far could they go? What about portages?

North from BC through the Yukon, west through Alaska towards the Bering Sea. On a yurtboat! I wish them happy rafting.

"There is nothing ... nothing - half so much worth doing as simply messing about in boats." Here's the rest of that part of The Wind in the Willows:

"Simply messing...about in boats -- or with boats... In or out of 'em it doesn't matter. Nothing seems to matter, that's the charm of it. Whether you get away, or whether you don't; whether you arrive at your destination or whether you reach somewhere else, or whether you never get anywhere at all, you're always busy, and you never do anything in particular; and when you've done it there's always something else to do, and you can do it if you like, but you'd much better not."

They applied for a 3 month Visa to go thru the Canadian section. The plan is to float for at least 3 weeks or till it gets too cold or ice starts building up on the river. I read a story called Yukon Summer in 1978 when I lived in Alaska the first time for two years. Its by Eugene Canton, he paddled a Klepper folding Kayak and went from Dawson to the Bering Sea but started before May and was on the river 3 months.

I've been up and down the Yukon River countless times when I lived outside Dawson, both summer and winter.  The Yukon keeps a blistering pace for the most part and they should be able to reach Fort Yukon in 3 weeks time, maybe even the Dalton bridge if they don't get mixed up in The Flats.  Things start getting a little icy by the end of October, so that shouldn't pose a problem. Neither should obstacles, as the only one is Five Finger Rapids up river from Dawson, and they already passed that. September, October are usually the rainiest months so the water levels should be up. Hope they have a good time, the fall colours should be great.

Old ways are the best ways.

Yup, a satellite dish is really old-school, ppine.  Didn't they use them to roof their cabins back in the days of the gold rush?

I'm impressed they made the whole thing from scrap. What a cool idea.

I keep telling my wife we're going to live in a Yurt when the kids are grown. She doesn't seem to believe me.

They are floating/paddling to Eagle AK over the next few days.

August and the end of July have the highest average rainfall. This year, I ran the Big Salmon at mid level and the Yukon was rising when I pulled off on the 4th of September. As North says, until mid October they shouldn't have a problem as the Yukon moves quickly, at least in the upper stretches. There has been a lot of wind this last month, so that might pose a problem. Just to note, Gary, the Dawson is quite a distance downriver from the Yukon's headwaters. They've missed some of the best paddling in the Southern Lakes. I wish them success and keep us posted on their progress.

I am not on it my friends in the Yukon territory are. I am here in the states

My friends made it to Eagle AK today from Dawson Yukon Territory on their raft down the Yukon River.