My family and another finished the JMT on August 2. I may put in a brief trip report on that later, but I thought my JMT profile planner might be of interest to other potential JMTers.

As we were gearing our planning last winter, my wife commented that she would like to have a distance-elevation profile of the whole trail to get some idea of how long and how much up and down there would be on each day. There are various versions of this kind of thing out there on the web, but I didn't find any of them particularly elegant, and I'm something of an Excel cowboy, and one thing led to another, so... 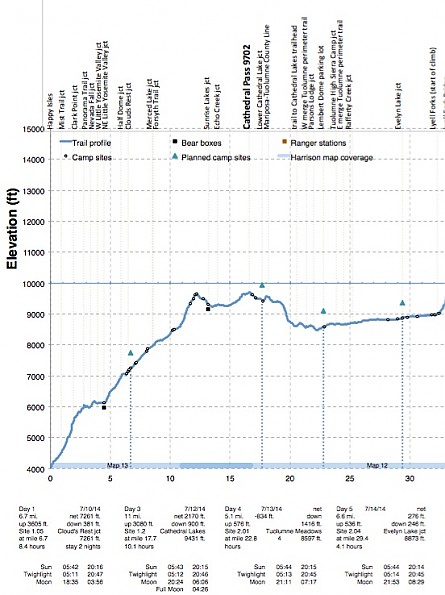 This is a slice of the first 30 miles or so from the latest version of the planner. It will be hard to read because TS shrank my image.

The blue profile line should be self explanatory. It is based on a 20,000 point GPS track that I found online and had to tweak extensively to get it to line up with known distances and elevations.

Across the top are the names of trail junctions and a few other important waypoints, with vertical lines so you can read off where they are on the trail.

Elsewhere in the workbook you work out a camp plan by choosing from a list of possible campsites based on the list in the 5th (bran new) edition of Elizabeth Wenk's (excellent) JMT guidebook; she has generously made this and other data publicly available, and has given the nod for this use of it as long as I give credit. Your camp plan is shown on the profile as the blue triangles, vertical dashed lines, and in the data at the bottom, which includes the daily mileage, net elevation change, total up and total down, your name for the campsite, its elevation and trail mile, and a simple estimate of the hiking time based on a (simple-minded, but better than nothing?) formula that I found that takes into account distance and elevation. At the very bottom are sun and moon rise and set times, with major phases of the moon noted as appropriate (the astro data is only for 2014, so that would need to be updated).

Any time you make a change in your camp plan the profile is automatically updated, so you can try different campsites and distances to fine-tune your days.

The profile also shows the locations of all the camp sites on the list (as tiny circles on the profile line, bear boxes and ranger stations, and at the bottom which of the commonly used Harrison maps you'll be on on any given day or stretch of the trail.

You can change print settings to print it out on 4 to 6 sheets of US letter or A4. I trimmed and taped them together into a big scroll, with the full campsite list on the back in case we wanted to make changes on the fly (we made a few), and took that with me on the trail. 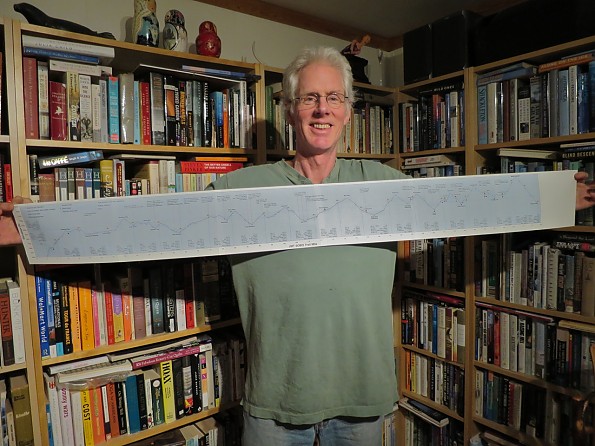 My custom version included info about possible side trips and natural history notes taken from Wenk's book (but was printed out before I put the trail junctions across the top). 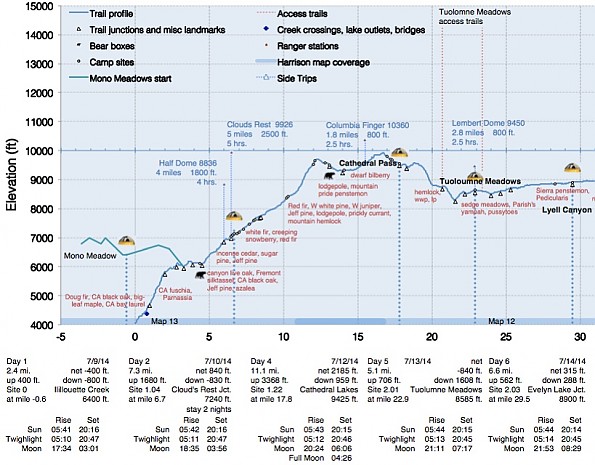 As you might guess, in the months leading up to the trip I put way too much time into this, but let's just say it was a welcome distraction

If you want to get a copy, I have made one version or another on both the Facebook (search John Muir on Facebook and ask to join) and Yahoo JMT groups, or I guess you could PM me with your email address. I have tried to make it somewhat user friendly -- you will need a fairly recent version of Excel to open it.

From some people putting this together would be prison-style torture, but it looks like you enjoyed putting it all together. Thanks for sharing and making it accessible.

Thanks for sharing. You did some great planning and really learned your route. It can be very rewarding to spend the winter planning trips.

As a personal favor, please be a little more careful with the use of the word "cowboy." It is a respected profession in Nevada, and I have lots of friends in the cow business. Thanks. If I don't mention it, people continue to misuse the word. It is misunderstood in our country.

.. please be a little more careful with the use of the word "cowboy."...

FWIW: the techie world uses the term cowboy in the context Red is using it to connote a mastery of software on par with a horseman's mastery of the equestrian arts.  Shucks, if someone called me a cowboy in similar fashion, why I'd be plum flattered.

Thanks for the heads up. Most people in the US can't tell a bull from a steer, especially the ones that work with computers.