My next winter plans for Utah

Good morning world! I worked my first half day yesterday at Dollar Tree. Four hours from 1 to 5 pm. Looks like this year its a 15 hour a week job. So in May I will go back to work part time at the Bunnery as well.http://bunnery.com/ Working two part time jobs to get as close to 40 hours as I can.
Thinking this morning in my dreams of going to live in south central Utah this next winter, down around the Grand Staircase,Escalante Canyon,Bryce Canyon and Zion National Parks area. Hard to decide what I want to do the following winter when I am not working the summer yet, but nowt that I am working and know what my income,rent,grocery costs and savings should be its easier to figure out my future.
If I work from now mid April to say mid October I should be able to save about $3000 after I get a new warm sleeping bag for winter camping and a some new outdoor clothing. Usually I buy second hand gear and clothing and in Jackson Hole there are plenty of second hand places to shop at.
I do plan to replace this laptop with a new one and get a new Canon camera and a couple lenses. Maybe a light pair of binoculars as well.
$3000 would be enough to easily live on for food and minor bike repair from late October to next April when I will return to work another summer in Jackson Hole. Or look for work in Bryce,Zion or the Grand Canyon next summer.
Pretty much I plan to work the summers as long as I can so I can put off retirement till I am in my late 60's if possible. Working just 6 months a year I do not feel as worn out or down and am able to be free the rest of the year Fall,Winter and Spring.
Anyway happy morning to you all!

You have managed to make it work so far.  Southern Utah would be an interesting place to spend the winter.  Retiring sounds like it might be difficult for you.  Still you are an inspiration to me.

I have wanted for years to do the entire Paria River from Tropic to Lees Ferry a distance of 75 miles with only a 2000 foot elevation loss. I have done the middle lower section in portions. It does not have a usual running flow of water except fromthe Conluence with Buckskin Gulch to Lees Ferry. So I figure maybe in mid winter when there is snow on the ground I could do it and use the snow for melt water.

I would also like to do the Escalante River which as well is about 75 miles from the town called by the same name to Lake Powell, and it has many side tributaries to explore. I have only done the Calf Creek Falls area of the upper Escalante. I have a good friend here in Jackson that has done many side trips on the Escalante for years.

I have gotten a bit fat last winter taking it easy in Tucson while I was there. I need to get back into better shape. I will be 60 next January and don't want my age to stop me from staying active in the out of doors.

You'd like Kanab quite a bit gary. Great access to BLM lands, the GSENM, Vermillion Cliffs, Kodachrome Basin, and plenty of less popular forest service lands too. More job opportunities in Kanab than Escalante, too! 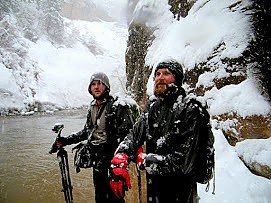 More Topics
This forum: Older: Baja Mexico? Newer: Seeking adventure partner(s) for next fall...
All forums: Older: 4 person tent options Newer: Why do I get headaches with a heavy pack?

Topic: My next winter plans for Utah