Does anyone have experience withe camping Matterhorn in Switzerland near to the top Matterhorn? How good is this campsite?

The official campsite in Zermatt is just a bit to the north of the train station. Years ago there was a campground in Winkelmatten, just up the hill from the center of Zermatt. It has been replaced by a fairly fancy hotel, though.

There is NO camping on the Matterhorn itself except for climbers who get caught out and have to bivuoac, usually in a storm. The image below is one I took a few years back the night before my partner and I headed up to the Hornlihutte, the starting point for the route up the Hornligratte. This is a Swiss Alpine Club hut. Members of affiliated Alpine Clubs get a discount on the hut fee. Next door to the hut is a fairly fancy hotel. 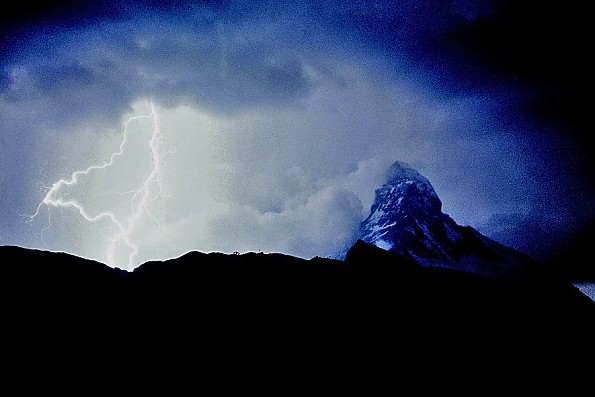 There are several routes on the Matterhorn, all technical. If you are a skilled and experienced mountaineer, the Hornli ridge is not too bad a climb, although it is technical. 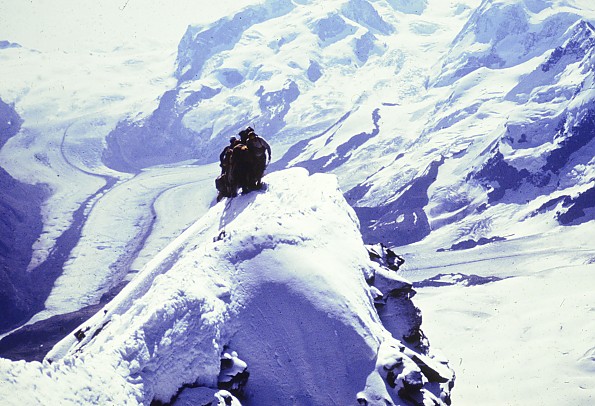 I took this image of other climbers coming up on the shoulder on the summit of the Matterhorn. Everyone is equipped with crampons and warm clothes. There were over 100 climbers on the summit while we were there, most coming up from the Swiss or Italian ridges, but a few from other more technical routes. 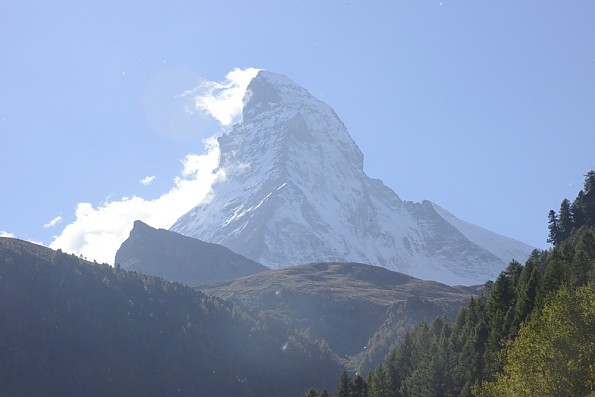 Here is the Matterhorn last September. The Hornligratt is the ridge in the center of the image. The Zmutt on the right is a more challenging route.

Some climbers do camp near Schwarsee, although it is not an official or even approved campsite. It is still a fair distance from the start of the climb. To get to Schwarsee (that means "Black Lake"), you can hike from town (couple of hours) or take the teleferique. There is a hotel at the top of the lift, though you cannot camp close to it.

If you are not very experienced, you can hire a guide at the Zermatt guides office. However, I believe the price for the Matterhorn itself is in the thousands of dollars, plus you might be required to go on a few easier climbs in the area to convince the guides that you are sufficiently in shape and experienced.

You should also know that with the changes in the climate, the mountain has become much more loose with more rockfall in recent years (the warming temperatures have melted a lot of the ice which has been holding the rocks together)

Wonderful response! I am glad that you wrote!

I am photographer. I want to make new exhibition about life along the Matterhorn.

Which side of the peak has better views?

I am looking for good tent camping in the area. I'm not rich. I have a tent.

I passed TMB. I have pictures on my site.

The Matterhorn is The Classic Peak, and is fantastic from all sides. The photos I attached are from the north, which is the traditional view. I also got an image from the air once when I was flying to Italy, and it is so iconic that it stands out even from directly overhead. In the Zermatt area, there is a profile view from the Mettelhorn, a small peak reached by hiking up the Trift Gorge to the Trift Hotel, then north. The last part of the approach is not as easy as it was before the climate change melted a lot of the small glacier you have to cross in the last km or so, but the view is great. The opposite profile view from the Monte Rosa direction is as good, though you have a bit more hiking to get there.

Keep in mind that most of the land is privately owned and the locals tend to not like people camping on their land. There are very few places you can legally camp, generally associated with one of the cities.

Is it easy path of Stshvarzsee to Hörnli Hut? Do I need climbing skills? Or it is trail?

No fees if you stay on the trails. The trails are well-marked with destinations and times (Most European countries give a hiking time based on an "average hiker" rather than a distance).

The trail between Schwarzsee and the Hornlihutte is fairly easy (depending on how good shape you are in). It is a hiking trail with no climbing skills required.

Thanks you very much for your time!

Bill S Do you you know from the Italian side of the Matterhorn where are the best viewpoints for photos?

Would you recommend any other region of the Alps with beautiful views closeby to Materhorn? Also old romantic villages ...
Because we are available 20 to 30 days for trip...

The entire region of the Alps from the eastern end in the Dolomites through the former Yugoslavia, Italy, Austria, Switzerland, and France into the Pyrenees is so full of fantastic views that you can't go wrong anywhere on both the north and south aspects. This is true even though the glaciers have substantially retreated throughout the Alpine Region even in the short 50+ years I have been visiting and climbing there.

You mention "old romantic villages". While it is true that many of the former villages have grown into cities and become modernized, there are lots of hidden valleys where people live in the same way they did in the 17th Century. I was a bit surprised in the Dolomites by the villages where the language spoken was Ladino, which is still close to the Roman version of Latin (although I was forewarned by a climbing partner who is Italian). On the western end, in the years I have been in Chamonix, it has grown into a tourist metropolis (although you do not have to go far out of the city to find quaint settlements). Even the language has shifted from the "Montagnard" French I first learned to Parisian French. But a couple hours walk puts you back a century or more, if you go in the right direction.

But you are from Bulgaria, which also still has enclaves that are not much changed over the decades. And your avatar photo shows trail signs that are in an area that has some old villages. So you clearly know how to seek those places on your own.

On the western end, in the years I have been in Chamonix, it has grown into a tourist metropolis (although you do not have to go far out of the city to find quaint settlements). Even the language has shifted from the "Montagnard" French I first learned to Parisian French. But a couple hours walk puts you back a century or more, if you go in the right direction.

Where is this place to Chamonix with an old village?  If I understand correctly?

I want to go from Zermatt walk to Camping Aroll (through Hôtel du Col d'Hérens) I am looking for appropriate path. Would you help me...?

Thanks to your advice I prepared the plan for the first 7 days of my trip. Thank You!