Durango CO to Hope AR on my bicycle

Going extremely light, no stove and cooking gear, just my spork,Leatherman,water bottles, tent, summer 40 degree bag,change of clothes,sandals, rain gear and a couple hats. About 10 lbs, buy food fresh or canned. Generally get free water from most stores with a soda fountain.

Course will have my newest Nikon CoolPix camera, binoculars,laptop and cell phone. I bought a charger for the phone that gives me 3-4 charges perplug-in. I bought it to do the Colorado Trail (which I did not do) but tested the charger and it works wekll. My phone and camera both will also charge of my laptop, via USB ports.

Anyway, so this is the approx. route plan: 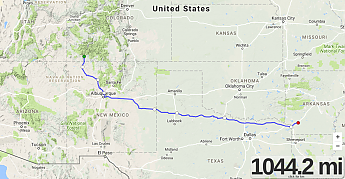 This the route plan

I cycled a route to Hope before from Jackson WY on my first bike tour in September 1982. I also cycled across Texas from Texarkana on the east side to Hobbs, NM on the west side, 900 miles in 1984 on the 7000 mile ride around the USA.

Pretty much from Durango to Albuquerque is going to be vast open desert like country, then the mountains of Albuquerque, then the next vastness of Texas.

Hope AR is just 30 miles NE of the Texas line after the Red River.

I have not been back home since 1996 when my mother died. I have two nieces there and their families.

After Hope I may either head onto Florida or turn back west and go back along the Gulf coast of south Texas up to maybe Big Bend then on back towards Arizona for the winter.

I will have about $1750 saved for this fall,winter and spring. I am still just semi-retired but may look for work next summer.

I have chosen a new longer route

All the way to the southern tip of Texas, via the Rio Grande,Big Bend and the Gulf Coast. Map here starts in Albuquerque, but I am starting in Durango Labor Day Weekend.

Most likely about 2 months of riding, but almost no hills, no mountains after Albuquerque.

After southwest Arkansas at Hope, I plan to cycle back down into Louisiana and head east to Florida. Key West is the goal.

Oh wow, that revised route looks incredible. How many miles does that add to what was already a long journey? Worth it.

JRinGeorgia asked: How many miles does that add to what was already a long journey? 1384 miles added. The mileage is shown at the bottom right of each map.

Changed mind though, too hot in Texas in Sept/Oct after doing some route weather averages. Going to Flagstaff and Tucson again for the fall then winter. 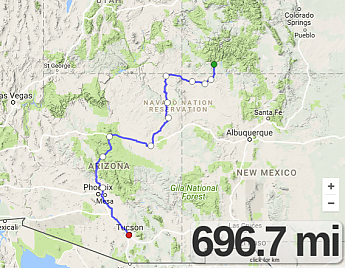 Onthegomaps.com allows you to trace your routes and find the distance

Decided at the last minute after the hurricane not to do south Texas, then changed my mind completely and am riding back to Flagstaff now. I left Durango two days ago and am in Farmington N.M.

Topic: Durango CO to Hope AR on my bicycle