I studied up on the permit process on the BLM website. It was clear that the calendar for the month of May would open up at 12:30 PM on February 1st, but it wasn't at all clear to me which of the two options above was right. So a few days ahead of time I called the BLM office and asked point blank if it was a race or lottery. I was told it was a lottery. Then, since you give credit card info and agree to pay in advance, I asked if it was treated as an application fee or a permit fee, i.e. if I don't get the permit do I still have to pay some or all of the fees? The guy on the phone couldn't answer that, bounced me to someone else who didn't pick for 5-10 minutes, so I gave up.

If it was a lottery as I was told, I planned to apply for four different start dates to increase my chances of getting a permit. I would assume that they would take all the applications for a given start date, randomize them somehow, then take the top one off the pile, award as many permits as requested, and repeat until all 20 slots for the day were filled. That's my understanding of how the do it in Yosemite. In which case I would  only have to get my applications in early in February and I would get the result some time later depending on how long it takes them to sort the applications and award permits.

But, just in case, I decided to play it as if it was a race. I actually practiced filling out the form (without sending it in) for an open date in March so I would know what info I would need. Then on February first at shortly before 12:30 I went to the application web page and started renewing every 30 seconds or so until the calendar popped up. I clicked on our first choice date, filled in the info as fast as I could (thank God for autofill), sent it in, and went back to the calendar to go for the second date. But as I was filling that out, and email arrived saying that I had already been awarded a permit for the first application!

By 12:15, maybe earlier, pretty much all the slots in May were taken.

From all this I deduce that permits are automatically awarded by computer on a first come, first serve basis, making it a race to see who can fill out an application fastest for any given date. Fair enough, but it could be a lot clearer on the web site. If you really want a Paria permit in any of the high demand months (May, September, or October by my reckoning) then you should do what I did: line up at the starting line right on time.

I know people like to grumble about having to get permits for access to public land / wilderness, but the good news is that, once you get one for one of these super popular backcountry places, you won't be dealing as much with the hordes of people and resulting overuse impacts that you would get if it were unregulated. OTOH there are 600 people a month going through the Paria in high use months, and if I guesstimate that on average people do it over three nights (we're taking four, some do it in two) then that would be about 60 people camping somewhere in the canyon every day. That does seem like a lot of use -- I guess we'll find what it's like out first-hand when we do it in May.

Day use permits are unlimited and you can get them at the trailhead, so you can do shorter hikes without all the competition. My wife, daughters and I did the 20 mile hike down Wire Pass and Buckskin and back up the Paria as a long day hike in June 2011.

Anyway, learn the rules, play by them, and you'll probably have yourself a good time.

Do they have any walk up permits to day hike the Buckskin? I hiked it last way back in the mid 90s when no four month ahead of time permit was needed, my friend and I just went to the Paria Ranger Station and asked for permits and then started down from Wire Pass, we left his truck along the White Road and our bicycles at the Whitehouse campground on the Paria. We walked down to about a mile from the confluence with the Paria, camped on top of a huge dirt mound, then the next day hit the confluence and hiked back to the Whitehouse camp, got our "locked" bikes and rode back to his truck.

The time before that I hiked the Buckskin in 1996 no permit was needed and it was my friend and I again. We did it in October when it was chilly in the canyon and we had about ten water crossings. Me being tall 6'6 the water was just to my waist, but my friend is shorter and in many cases, it came to his chin. We got to where after seeing me go first, he didn't want to wade. And we went down the back up Buckskin that time, we were quite cold by the time we waded 20 times.

The first time I did it was in 1990 while visiting a friend who was working the north rim (where I am working this summer BTW). We did Buckskin in late May and there were just three pools of water, although it wasn't just water but milkshake thick muddy water. The three pools were close together near the head of Wire Pass, and it stuck to our legs, all we could do was scrape it off with our hands, by the time we made it to the confluence our skin had dried out and then we came back out the same way. There was a spring at the confluence that we washed our legs and feet off in. By the time we made it back to the north rim our feet, especially around our toes were dried out and cracked.

So in case you get the same thick muddy water we did, you may want to carry extra water to wash your legs and feet off with.

Another nice hike is to do Kaibab Gulch and that is when you get to the main Buckskin Trailhead, go up the canyon towards US 89. It no slot canyon but is interesting no the less and a lot less hiked, so especially in May, you'ld have it to yourselves.

Buckskin Gulch starts at lower right in the white area of this terrain map near the curor GPS box, Kaibab Gulch is the dark grey canyon going NW. Its about 8 miles from the Whitehouse road up to US89.

Have fun and maybe come visit me on the north rim, it opens May 15th. Let me know if you are coming and I will meet you at the Bright Angel Lodge!

According to the web site, walk-up day use permits are now available via self-serve envelopes at the main trailheads, $6.00 per person and $6.00 per dog.

Thanks for the invite, Gary. We'll be doing the hike May 6-10, the heading up to Moab -- we signed up for a 6-day commercial raft trip through Cataract Canyon. Not sure if the North Rim is in the cards for us this time, but if it is we'll be sure to look you up.

Well, the north rim doesn't open to tourists till the 15th of May. We employees have to be there on the 7th to move into housing and start setting up the lodge for opening the 8th - the 15th.

So maybe after you do Cataract Canyon, by then it will be open. Sounds like a good trip on the Colorado River.

You should read River, Source to Sea by Colin Fletcher. He rowed a raft down the entire Green River from Wyoming into the Colorado and down to just south of Yuma, till the river dries up from being used from irrigation. 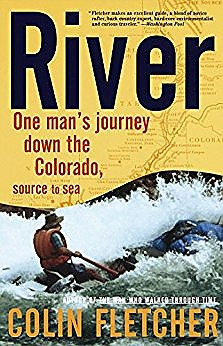