My buddy and I are planning a backpacking trip. Looking at Colorado and Zion. Does anyone have any suggestions as far as local, stops, etc that might help us coordinate a trip. We have 7 days, driving from Buffalo ny, so a day of driving. We generally hammock camp and can go below zero with gear. We've bagged peaks in the adk, so elevation is ok as well.

Any Suggestions would be appreciated.

You cannot possibly get to Zion or Colorado in one day from Buffalo. It is one thousand miles just from Chicago to Denver.  You cannoy get there in two days. You need a location closer to home or more time.  Colorado gets snow in November and even the desert can be cold by then.

Given your drive radius limitation, concentrate of venues east of the Mississippi.  You do not indicate if this is a early or late November trip  That makes a huge difference in what you can visit and still enjoy.  You don't want to end up in days of freezing rain or up a trailhead that gets gated due to snow while you're on trial. 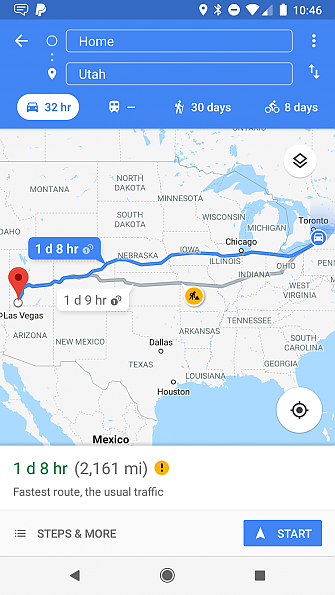 @ppine. It's totally doable in one day. I've driven 13 hours straight to Georgia and between two people we should be able to make a straight shot right to our chosen destination whether it be CO or UT. Stopping only for the occasional leg stretch, bathroom and gas. I posted a map image of the drive time to the farthest point of Zion and it's only around 30 hours. Only! Haha. We discussed making a road trip so that's why we've set our destination father than usual.

@whomeworry , Ed thanks for the reply. Sorry I forgot to include the date.

The plan is to head out right after Thanksgiving on Black Friday11/23. We've been all over the Eastern region and we're hoping for some unique destinations on our bucket list. Zion, Rocky mountain, glacier park are a few, due to our work and family lives this is the only time we could coordinate together.

I do plan on calling the local forestry facilities when we settle on a location to procure safety tips and recommendations. We have experience with sub zero temps, managing snow, ice and have primitive survival skills. But you make a good point regarding trail closures. That something to inquire about.

Is there anything in that region that's worth seeing in November?

I should note that we are actually hopeful if snowy conditions. WellW have snowshoes and geared up for below zero temps if the conditions arise.

Backcountry permits have to be applied for 4 months in advance. But you could do many a hike outside the national parks, Maybe hike up or down the Paria River from Tropic to Lees Ferry, or Winter is actually a better time to do this route and its an easy hike, 2000 feet elevation loss/gain in 70 miles either way. Snow and or ice would mean water and no chance of flash flood in late November and early December.

In Zion without a permit you can do Angels Landing, Weeping Rock,and all the day hike trails. My favorite is to Oberservation Point, its 1000 feet higher than Angels Landing. 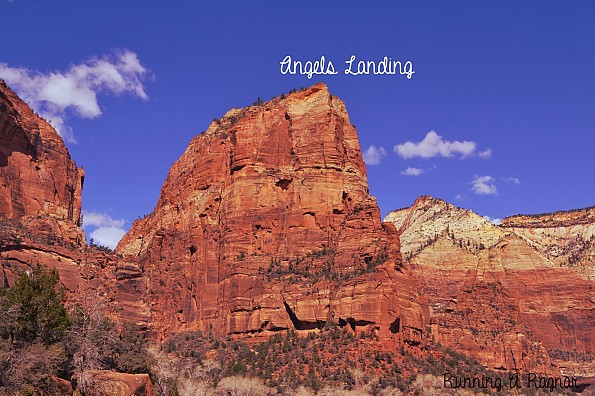 Angels Landing in Zion. The top where the name is is 2600 feet above the surrounding canyon below. 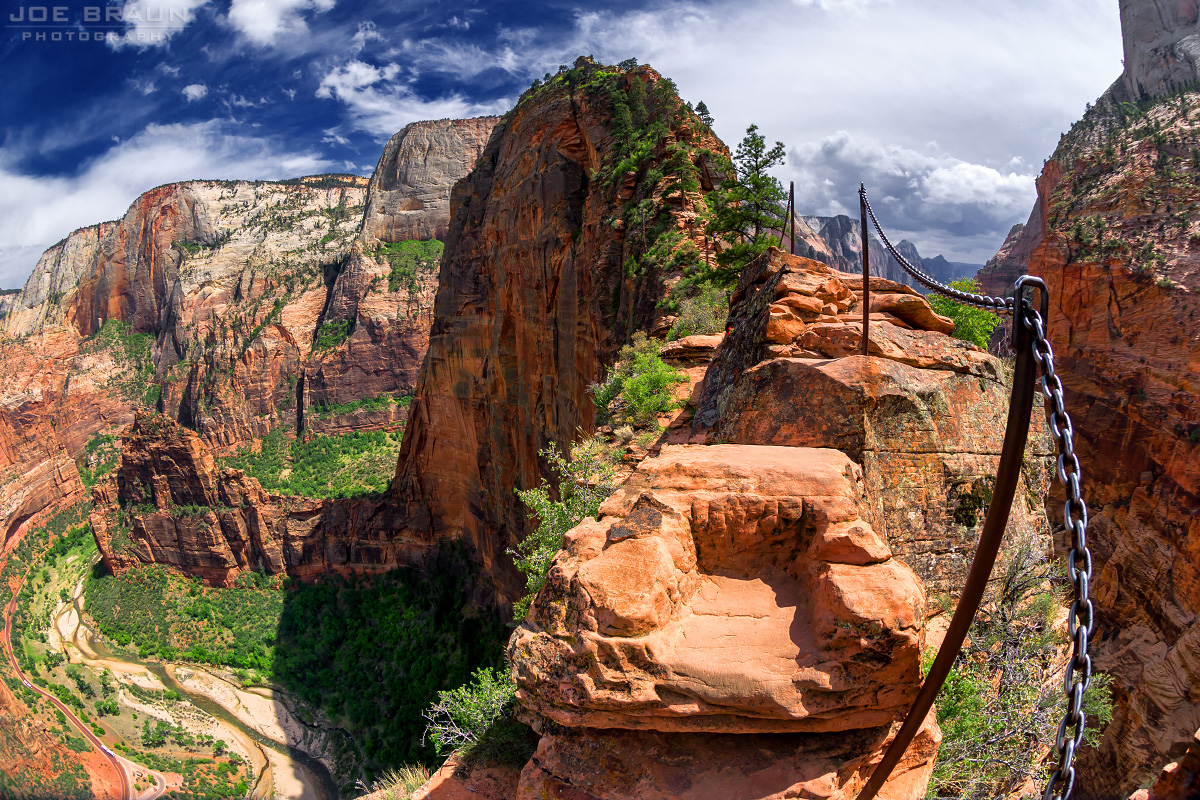 The knife edge on the way to the top of Angels Landing , a 1000 foot drop on one side and a 1500 foor drop on the other straight down. The Virgin River can be seen on the left side at the bottom of Zion Canyon. Another drop off on the NE side of the trail.

View from the top north side of Angels Landing

View from the top of Oberservation Point, Angels Landing is below.

You could do a nice 12 mile hike down the East Fork of the Virgin River from near Mt Carmel Jct to the boundary of Zion, this canyon is called the Parunuweap, also known as the Main Zion Canyon's little brother. Its less crowded than the main Zion Canyon, so full of solitude. 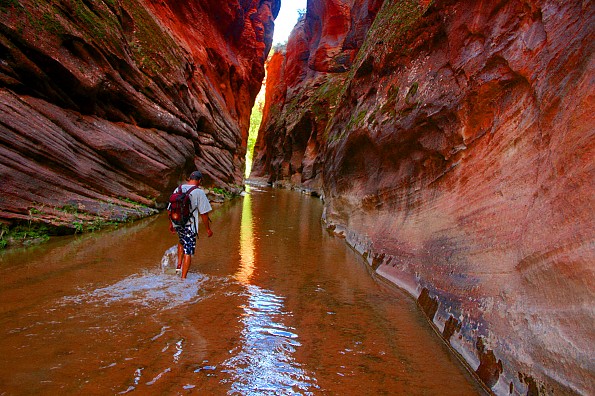 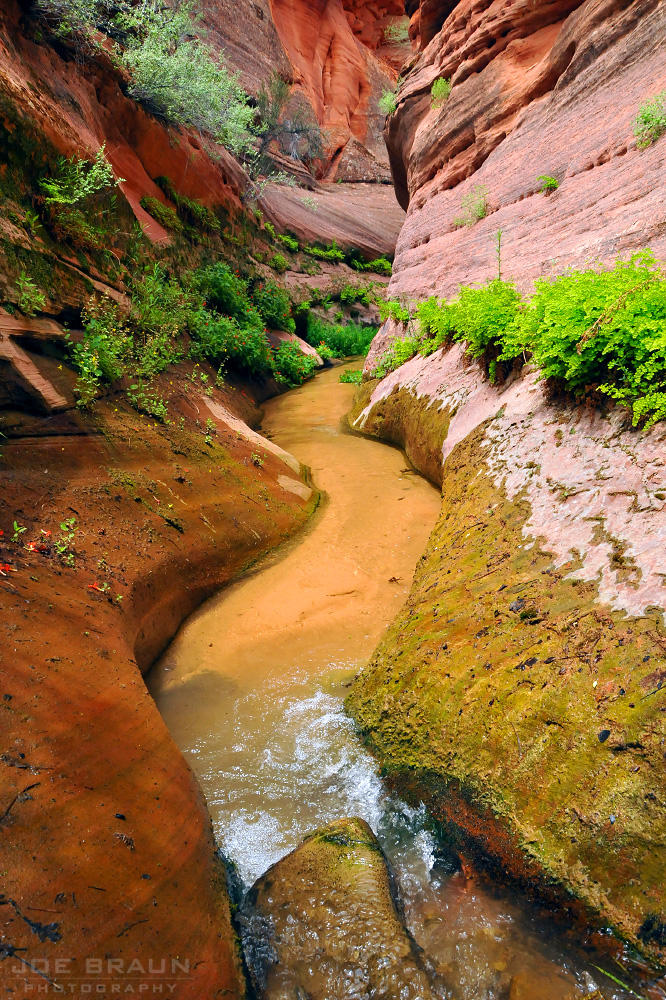 Has many narrower side canyons 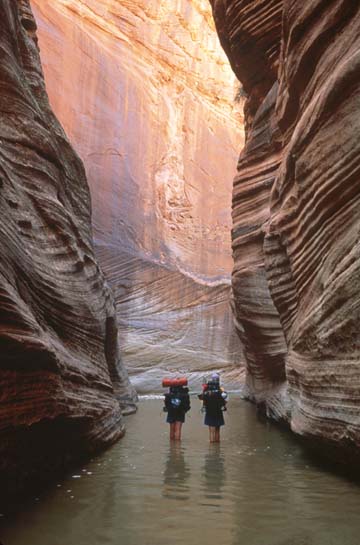 Beware the water will be cold, maybe even frozen in area's where little sunlight hits the canyon floor in winter.

Or you could drive down here to Tucson AZ and visit me, I have been an outdoorsman backpacker for over 40 years. I can lead you on a hike to see clear water steams and water falls in Sabino, Bear and Lemmon Creeks. 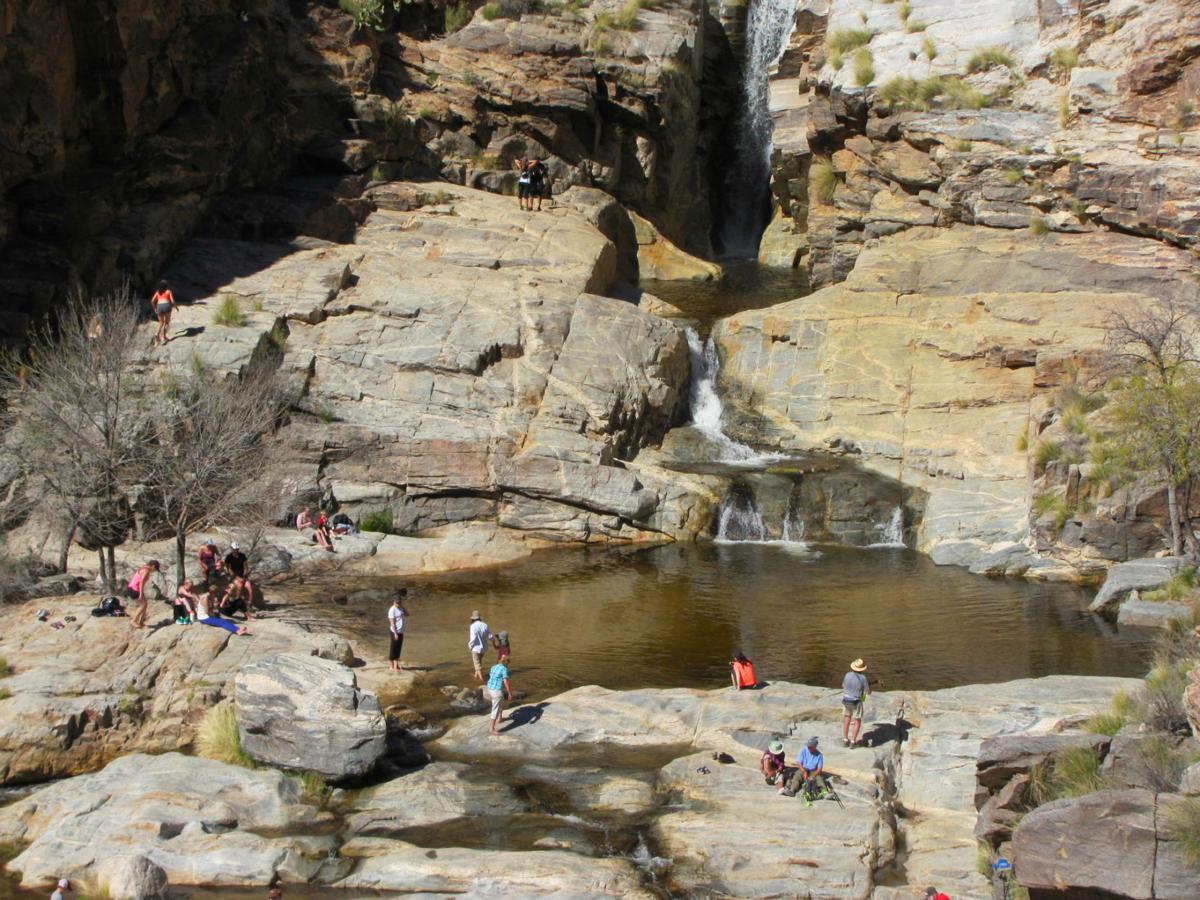 Base of Seven Falls in the Catalinia foothills NE of Tucson. I was recently swimming in the big bottom pool above. Sabino Canyon, warm even in late November to us northerners. 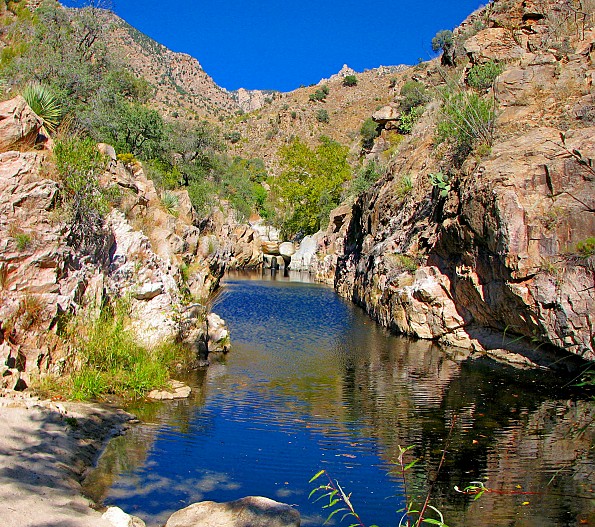 Tucson would be further than Las Vegas by coming south instead of going all west.

Another option is near Flagstaff AZ, go to West Oak Creek Canyon near Sedona.

You could also do a section of the Arizona Trail. Hike from Flagstaff to the South Rim of the Grand Canyon, or south over the Mogollon Rim down to the Superstition Mountains.

So I read your bio before this reply, to get some idea of who is posting this thread.  What stood out is while you may be an "outdoor Junkie" you note you have only recently gotten into backpacking.  You also mention you consider yourself a survivalist.  So are you looking to survive this trip or enjoy it?  Additionally the concept of survivalist in the western mountains often translates into entirely different skills than what one acquires in the Adirondacks and most of the lower elevation eastern mountains.

Two items about your plan concern me.

30 hour drive
Sure you can do that without rest, but once you get to your destiny you will be in no shape to start hiking unless you are a mutant zombie that runs on plutonium.  My friends used to HATE my forced drives of 20+ hours from Los Angeles to New Mexico, Colorado and Washington, regardless I was the one doing all the driving.  They simply needed a zero day to recover.  And we were in our 20s (not 40s) in tip top physical condition when we did these trips in the 1970s - 80s.  Thus even if you can drive with no stop overs, you will most likely need one day to get your wits back, both before you set out hiking, and another day to recover when you get back.  You can debate otherwise, but no one I know can do what you are intending, enjoy it, then be effective at work once home again.

Heading off into snow country during shoulder season.
No wise person well experienced with snow travel intentionally heads off into this type of situation.  You may be able to survive getting nailed in the first snow of the season, but it is never fun, and is one of the more dangerous times to be in the BC.  The one thing gun-ho types neglect to appreciate is the unreliable footing the first snows offer.  It covers the ground features and offers no support.  Snowshoes will get fouled on terrain just inches under the snow surface.  Or your feet will often plunge through all the way to the ground, and God knows what solid features you'll be stepping upon.  Could be flat, or a rock that'll turn your ankle, or a hole that catches your foot and breaks your ankle.  This is nothing to mess with.  I got caught in a late season snow of 9" that fell on primarily exposed ground; it took 16 hours to travel 10 miles.  Furthermore trails out west often are not as well marked, and completely disappear under snow.  It is easy to stray off even familiar routes.  At the very least this can be a huge inconvenience.  Trails often are cut through thick stands of aspen trees.  If snow covers your trail while you are in the BC you may not find the spot where the trail cuts through the aspen, and you will be stuck spending hours searching for it on your way back out, or tediously, slowly blazing your own path, getting your gear hooked by every branch you pass.  There are additional, similar considerations.  Unless you possess VERY good navigation skills (sorry but GPS tech and geocaching does not count) you may get you butt very lost.  Lastly first season storms in the west are generally pretty nasty affairs with Big Winds and white outs, and can last several days.  You will be able to do very little travel while under such weather.  And don't ya know, our first storms usually occur sometime during the last two weeks of November...

One other item worth sharing: many eastern folks prefer hammock camping.  While we have venues out here where this is possible, the terrain generally better accommodates tent camping, and in many instances is difficult to find decent camp sites suitable for hammocks.

You can ignore this advice, but it comes from someone who (partial list here) has done mostly self guided trips: decades of ski touring in the High Sierra; summited many of the PNW cone peaks; and have done a half dozen high altitude climbs in the high ranges of Alaska and Peru.  I avoid the mountains that time of year, and instead camp in the desert during shoulder season.  Perhaps the lower elevations of southwest Utah or South Rim Grand Canyon will suit your fancy.  But stay away from the mountains.  In any advent, venues are often reserved months in advance on trails that maintain quotas, but they also have set aside a portion of permits for walk-ups.  So if you desire a popular venue you may spend a few of your precious vacation days hanging out at the visitor's center before you can get on trail.

Ouachita National Forrest in Arkansas might be of interest to you.

we drove thru the night and hit the trail around 2pm? If I remember.  20deg and soaked for 3 days. Dang I loved it that place was great. But if I do it again I’m gonna take Ed’s advice. Get a hotel and rest up 1st

But if interested Eagle Rock Loop in Arkansas might be worth you looking at. You can check out my trip report from December 2016. Plenty trail  options available and hammock or tent works 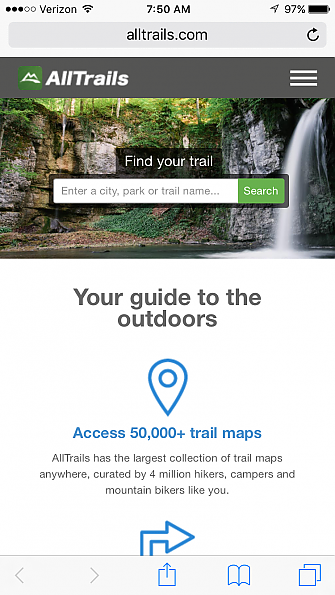 Tucson will be noting the 60th anniversary of a tragic event that occurred mid-November, 1958 - the deaths of three young men who tried to climb Mt. Wrightson and walked into the teeth of an unpredicted storm that left six inches of snow on the ground in Tucson.

I was hiking in Sabino Canyon that same weekend and I have vivid memories of snow plastered saguaro and swirling winds. The idyllic landscapes shown by Gary Palmer were blanketed with snow and more closely resembled glacial terrain.

Learning of the situation developing on Wrightson, I and my companions volunteered and participated in a chaotic, disorganized rescue operation that terminated three weeks later with the discovery of their bodies.  This experience affected my life profoundly, leading to work in the NPS and decades of volunteer SAR activity.

Shoulder season activities are tricky; you need to be flexible and willing to drastically alter your plans.

T answer your question, there is a lifetime of places and items "worth seeing' out west.  i would encourage you to spend a lot of time out here.  Trust me, a lifetime isn't enough.

If you can drive to Colorado or so Utah in one day from the East Coast, you don't need our help.