places in utah with lots of things to do

me and some buddies are planning a five day camp trip and are looking for good places to go and things to do. any suggestions?

Hiking in any of the following

The Parunuweap, East fork of the Virgin River

Buckskin Gulch and the Paria

Definitely go to Zion, it is one of the most awesome places I have ever trekked.  Late spring and early fall are best seasons to be there.  While you can backpack in Zion, the opportunities are limited, unless you are willing to canyoneer, and do a lot of research to assure you will have water at your destination.  Most people car camp at Zion, doing long day hikes to get into the more remote areas.  The car camp/day hike approach will give you plenty to do on your first visit.  It behooves you to get a camp site reservation in advance.  If you do grow bored, however, Bryce is a couple of hours away, and worth an overnight stay to take in the colors and ambience.

And from Zion , the North Rim of the Grand Canyon is an hour south, Bryce as  Ed says is about an hour north. The western edge of the Grand Staircase is just east of Zion.  The Paria and Buckskin Gulch area is about an hour SE along 89 towards Lake Powell. Buckskin Gulch is one of the longest slot canyons in the world. Its 13 miles from a place called Wire Pass to the Confluence with the Paria. A slot canyon means that its hundreds of feet deep but averages only a few feet wide.

What part of the country are you starting fro, are you driving out, flying and renting a car, or ? Starting in the eastern part of Utah there is Arches National Park, then a bit farther SW is Canyonlands, Capital Reef, etc. Starting in the north drive down to Bryce, south on to Zion east to the Paria, north to Canyon lands and Arches.

hey thanks guys, and Gary scince you where wondering we actualy live in utah and we are just trying to pack as much stuff as we can into one trip.

and just for anyone going to zions i realy recomend hiking orderville canyon its a fun canyon for people just starting off you dont need any special gear or anything, but you need to get a permitt in advance or else you might not get one.

Have you ever hiked to upper and lower Sand Wash near Mt Carmel? There are slot canyons at their heads called upper and lower Red Cave. Then theres Red Hollow, Spring Hollow, some fossilized oyster beds and the Parunuweap, see map below. 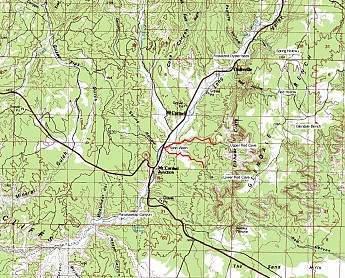 The two red lines show the routes to upper and lower Red Caves.
Click on the map for an enlargement.

Also have you seen the Petriglyph Canyon about two miles west of the ast Entrance to Zion. Its about 200 yards off the highway north.

thanks i hadnt even heard of those before ill look into adding that to are trip, do you know if there are any good biking trials near there?

The sand around this area is a very fine sand, more like a silt and is very soft, sometimes making mtn bike riding impossible. An during the rainy seasons it can become a sticky clay. September is one of the rainiest times of the year. 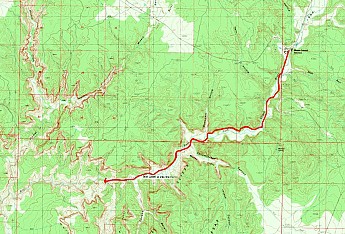 This route starts as an old road that leaves Hwy 89 just south of Mt Carmel Jct (there the Thunderbird Lodge is). Its about 1/2 mile just after crossing the East Fork of the Virgin River head west on the dirt road. Go about 2-3 miles to where the road comes to a private Ranch near the mouth of Monument Hollow (see in the above map about just right of center where the route goes from the north side to the south side of the main canyon). Park your car here under the big Cottonwood tree near the river and ride your bikes on west. There are many side canyons to follow on foot as you go deeper and deeper down into the Parunuweap. Evenually the old road becomes a trail and then just follows the river as the canyon narrows. The East Fork is a good running river and always has water in it except in late fall (Aug). 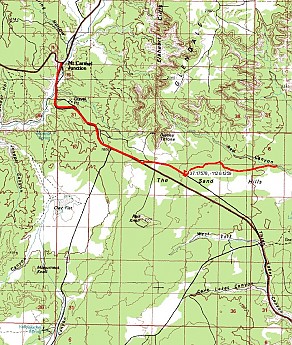 To get to another bike route, go south of Mt Carmel Jct on Hwy 89 towards Kanab. After the hill starts to level off and go down slightly, look for a dirt road on the left (about center of the map above) and take this about 1 1/2 miles till aolder sandy road turns east (at the marker above). Park your car here and take your bikes about 3 miles to Red Canyon. This is another nice narrow canyon. Hike upstream. It may or may not have running water in it as any comes off of Glendale Bench during rain or snowmelt.

The two black roads on the lower map going south before and after the turnoff to Red Canyon lead to The Coral Pink Sand Dunes, an area with huge 200 foot sand dunes where ATVers go to ride.

Topic: places in utah with lots of things to do