I just got back from a 3 day trip in Cumberland Gap.

Outside the visitor center: 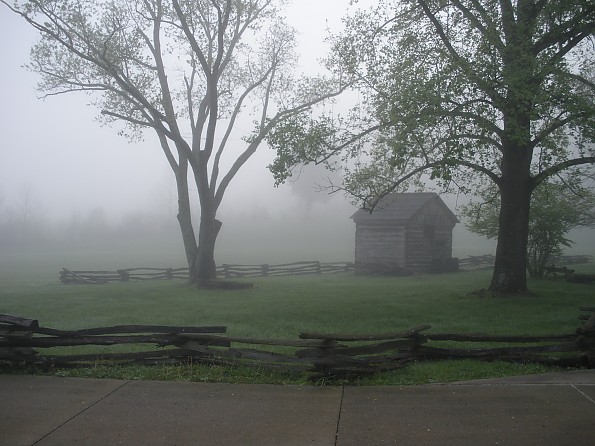 Driving up to the Pinnacle parking lot and Ridge Trail trailhead: 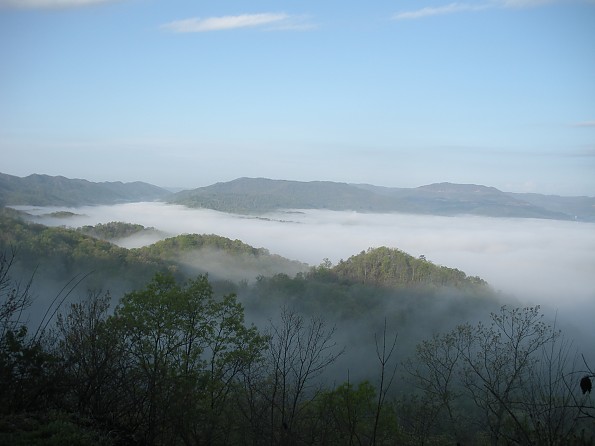 From the "pinnacle".  The depression in the lower right of the photo is the saddle of the gap, where the original pioneers of what would become the western frontier (allegedly) first passed through. 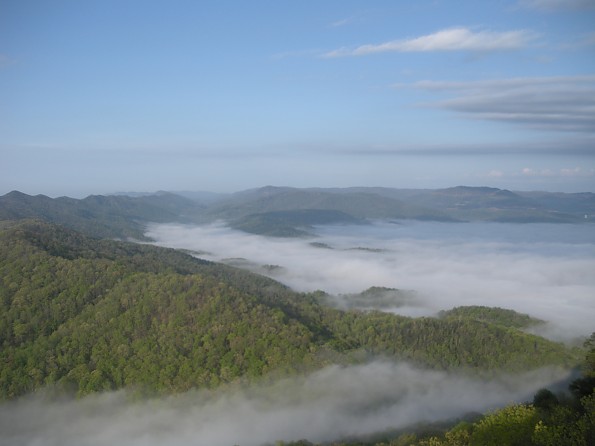 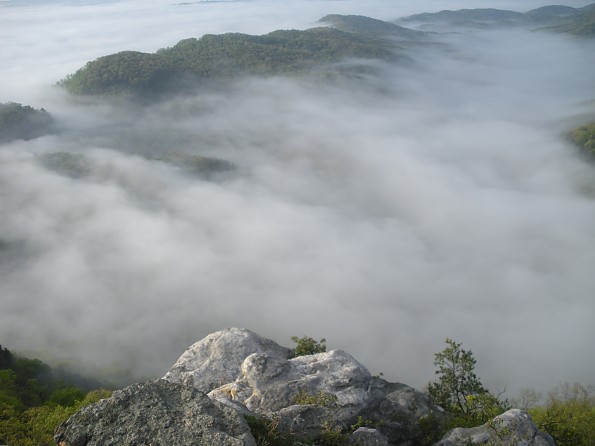 View of the valley: 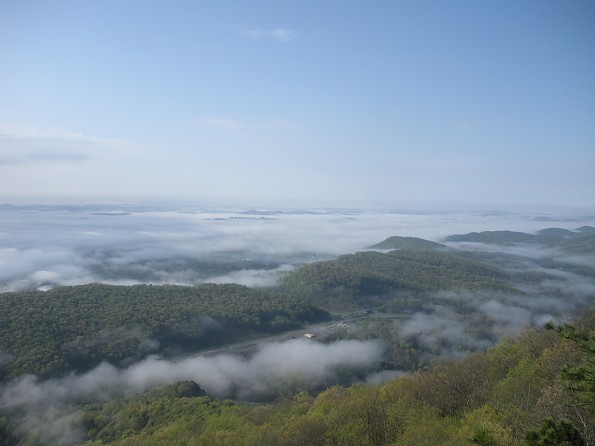 I'm a sucker for a decent kit shot: 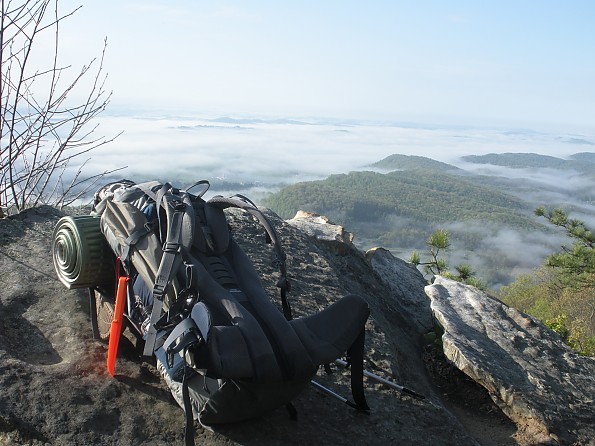 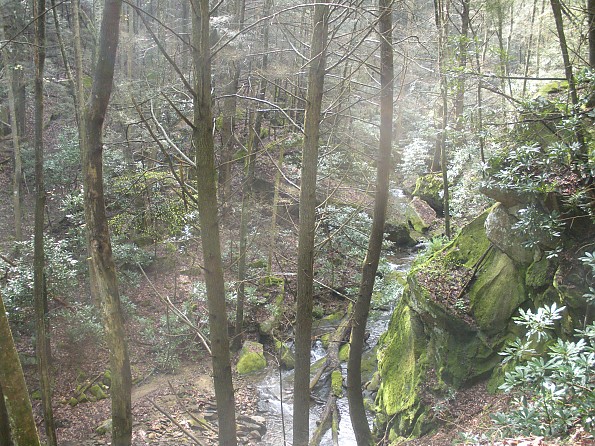 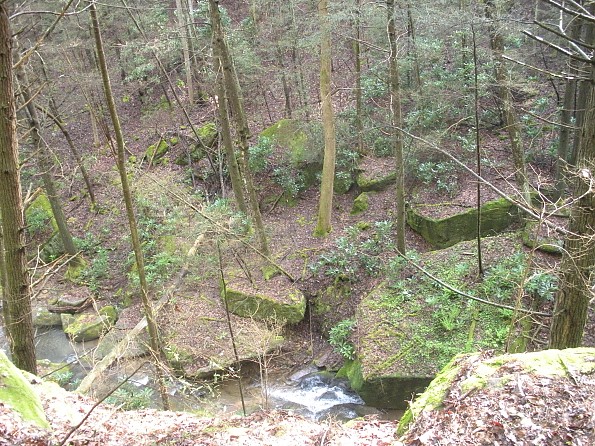 Missed the Rhododendron bloom.  I was a little hopeful I would catch it due to the unseasonably warm temps.  Alas, it was not to be. 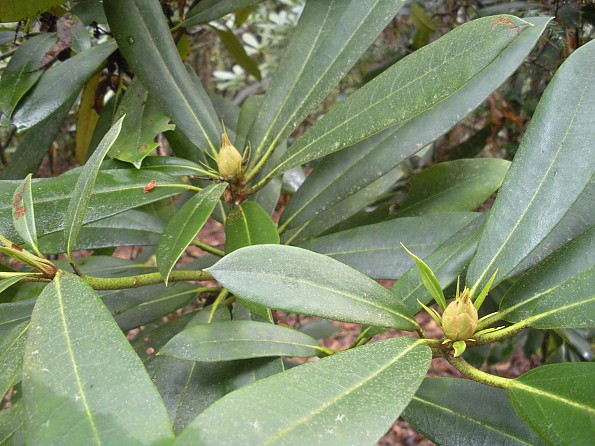 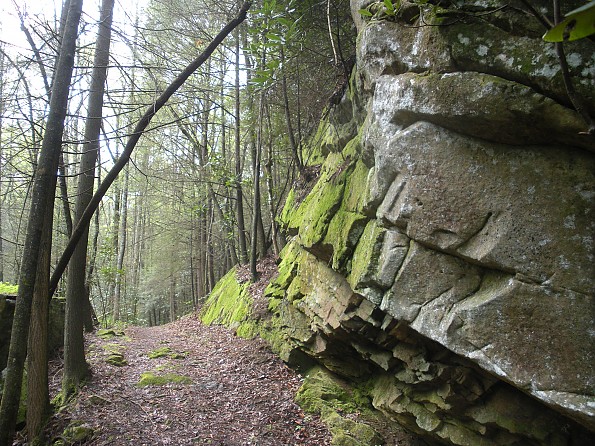 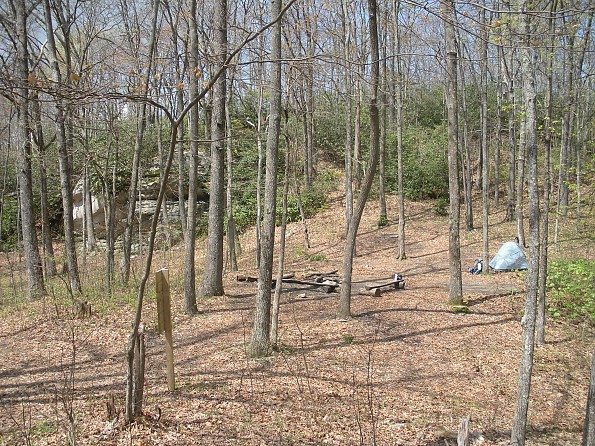 Another shot of my little tent: 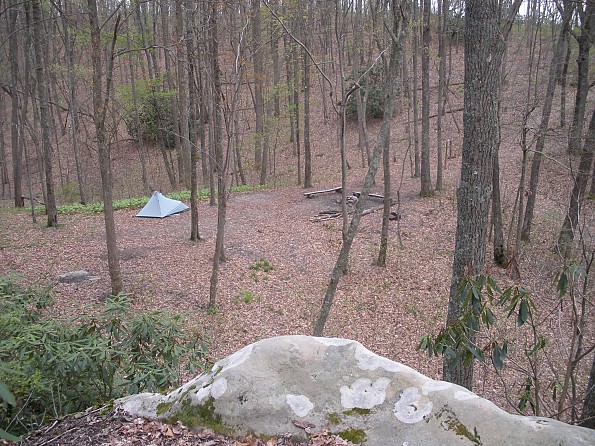 These guys were everywhere: 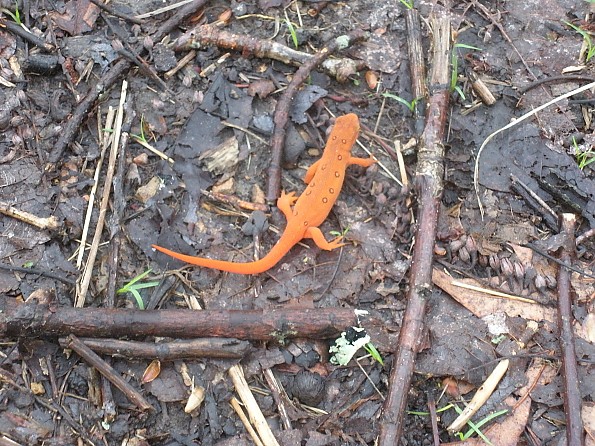 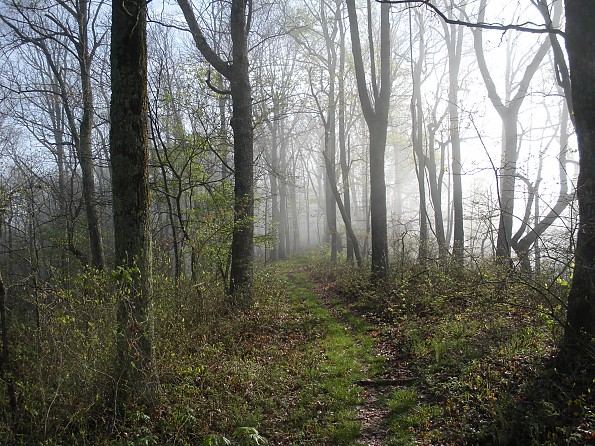 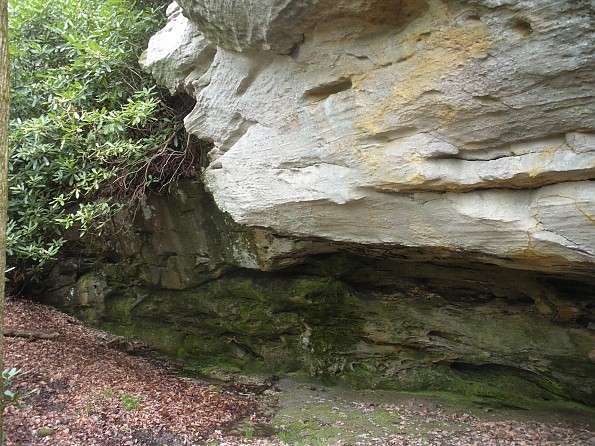 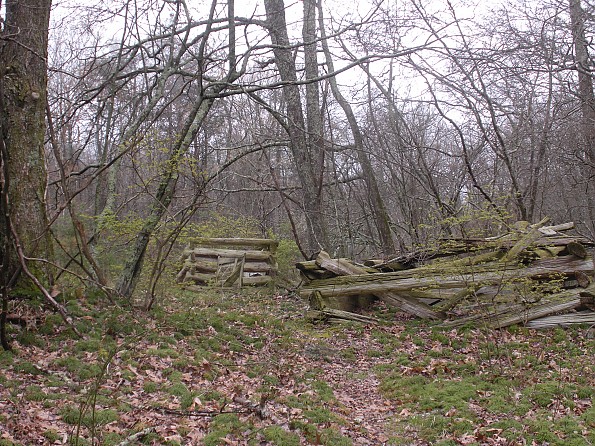 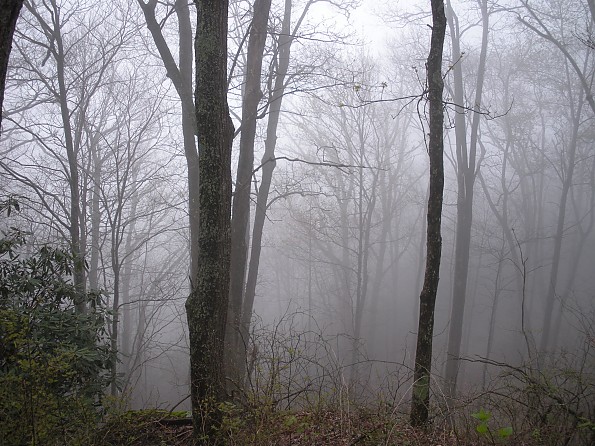 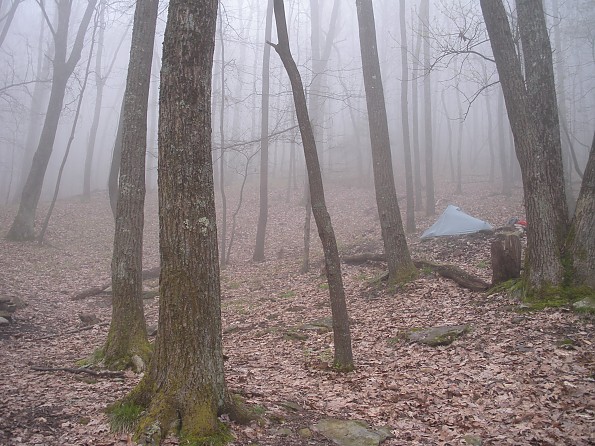 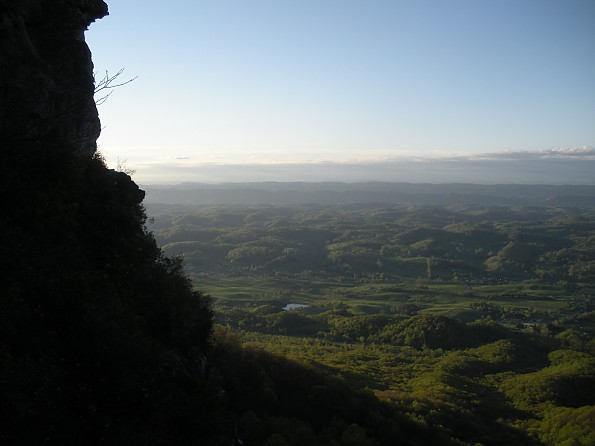 Another Shot of the valley below: 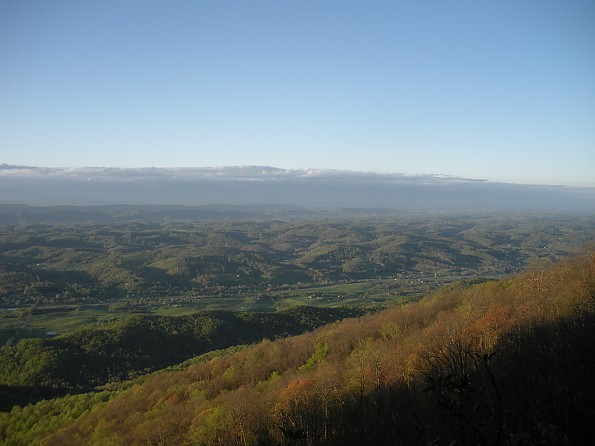 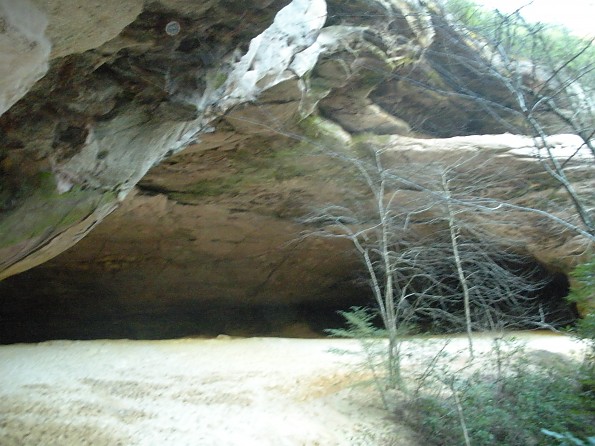 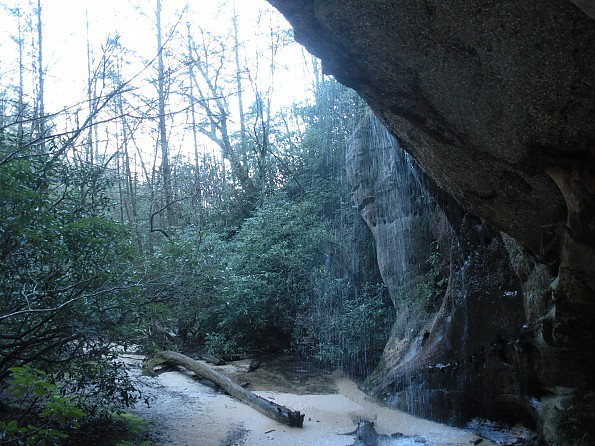 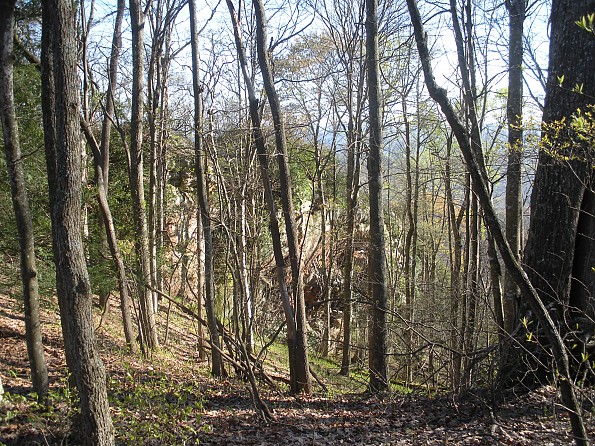 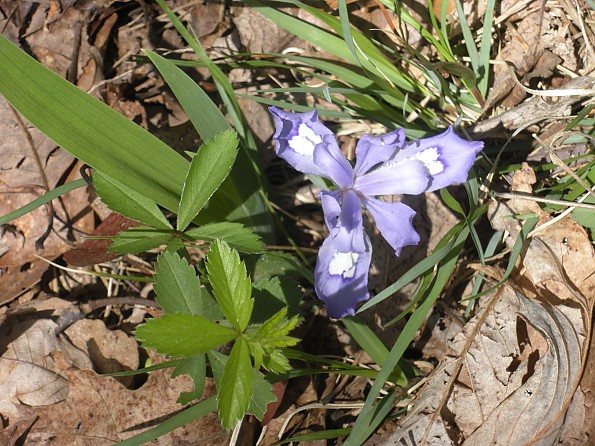 Great little trip.  First day I hiked from the pinnacle on the Ridge Trail to the junction with the Sugar Run trail.  I took that down and back up again.  The Sugar Run trail reminded me a lot of the Road Prong trail in the Smokies, just on a smaller scale.  Once back at the trail junction, I took the Ridge Trail to Gibson Gap.  Great little campsite with a spring close by, views over the nearby ridge, and a nice little rock overlook.  10 miles or so?  The next day I headed out along the Ridge Trail.  The fog got thicker as I went on, and by the time I reached the junction with the Hensley settlement spur trail, I was pretty well enveloped.  I camped that night at White Rocks.  11 miles that day I think.  The last day I checked out the White Rocks overlook and Sand Cave.  I was actually planning on spending at least one more night in the park, but I decided early on to just make a go for it and try doing the whole thing straight through, so I just did it, 20 miles in all.  The first 15 were great, the last 5 weren't.  This park allows horses on almost all of the trails, and I was lucky to have gotten out earlier in the year.  The trails weren't in too bad of shape, but I wouldn't try going back much later in the year.

Very nice trip report .ghost. I loved the over looks of the valley. The Eastern(or Red Spotted/Red Eft) Newts are everywhere up here as well.

Looks as though ya had a nice trip.

How are those Alicos doing for ya?

Reminds me of spring break in NC when I was a kid.

The Alicos are as advertised.  Barely any signs of wear, still a little stiff.  I bet it will take 400 miles before they are where I want them.  Also, the addition of crocs as camp shoes are extra ounces I will take with me anywhere now (thanks to Tipi for the suggestion).

Great trip report ghost. I love the crocs for 3 season and some down booties for winter- mandatory! hahaha

Nice trip report.  T sand caves look like they would be fun to climb.

Nice trip .Ghost., thanks for showing. this one is close to me but I've never been there. Very cool!

Nice TR!. With all the sinister fog it looks like the set of a horror movie.

Looking back on the photos of the fog, I can't help but thinking "Man, I swear it was worse than that!"  At the time I made my camp at White Rocks, I hadn't seen anybody for 2 days and hadn't seen the sun for quite some time either.  I am pretty new to backpacking, at least of the solo variety, and I find the sense of isolation to be a much bigger challenge to overcome than any mileage or pack weight.

I totally get what you are saying though.  I brought my meanest dog with me when I went on my first solo trip (solo in the human category anyway).

Best part of solo trips is no-one to complain about bad singing, cooking or BO!

Great trip report, I also liked the photos with the fog, although they were all great. Great views as well!

Which Alico boot did you get?

I have the Alico Tahoe.  Perfect for rougher trail or off-trail use that doesn't involve extensive bushwhacking.  I reviewed them recently on this site.  You have the Summits, is that correct?

I have the Alico Tahoe.  Perfect for rougher trail or off-trail use that doesn't involve extensive bushwhacking.  I reviewed them recently on this site.  You have the Summits, is that correct?

Yes Ghost I have the Summits, your memory is better than mine it would seem. Come to think of it, actually I do think I read your review.

In the last two years I have worn out a pair of Asolo FSN's, their lightweight backpacking boot - which to be fair does do what it is advertised to do. I have had my Alico Summits for 5 years and they show very little wear at all. Tough as nails.

Nice TR ghost, thanx. I love the foggy pics. Not to often we get to experience the fog here.

The isolation of being solo can wear on me at times too. Usually if Im doing a low mileage day just kinda hang'n around camp. I think its more of a boredom thing.  As long as Im beat'n down the trail I dont have any probs with it.